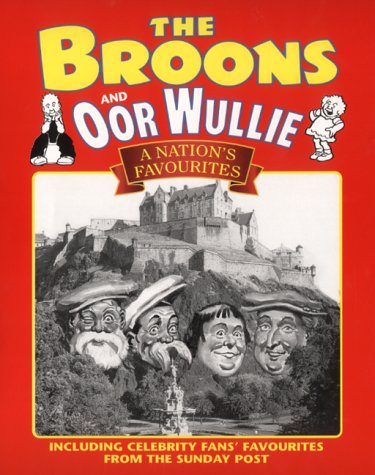 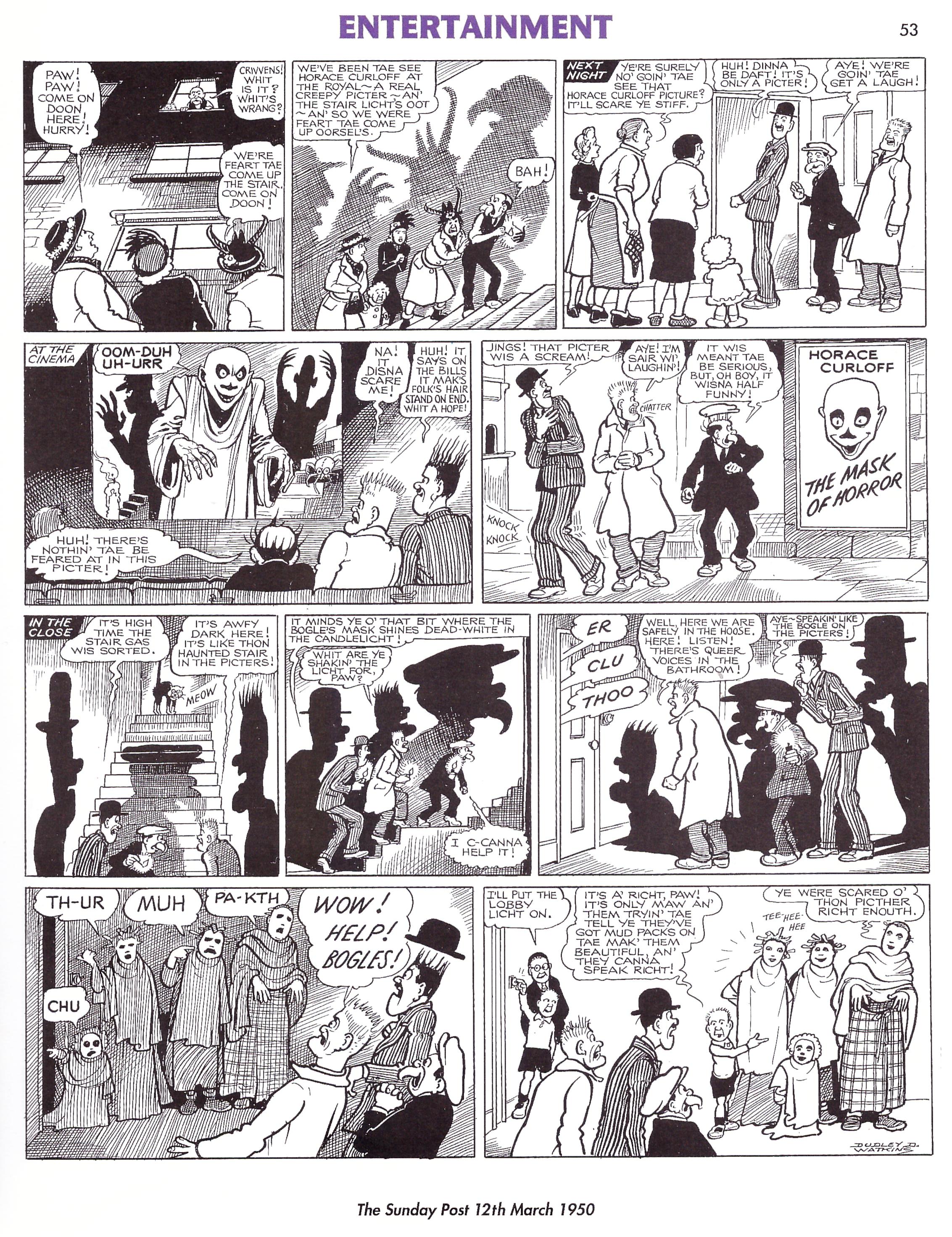 This millennial collection reprinting perennial Scottish favourite Sunday strips The Broons and Oor Wullie doesn’t depart much from the tried and reliable formula applied to their other hardcover reprint collections. Such is the consistency of cartoonist Dudley D. Watkins that although he modified his style during the almost thirty years he drew the strips, there’s no loss of quality. The work from the 1940s is more crowded while the strips from the 1960s have more space about them, but Watkins’ line is equally admirable in either decade and the one in between.

A departure from the other books is the cover hint that assorted Scottish celebrities have selected their personal favourite strips from over the years. Inside they just praise the strips in general, remembering growing up with them, rather than nailing one indelibly imprinted strip, although some go so far as to name a favourite character. Fair play then to Lorraine Kelly (beloved giggly UK TV presenter) who does recall a specific strip, although it’s not included. Many of the celebrities selected are likely to have British readers outside Scotland puzzling (Mrs Mack?), never mind folk from further afield, but a few genuine internationally known figures do participate. Alex Ferguson supplies a spectacularly miserly and non-committal pair of quotes.

It would be equally miserly to focus on the celebrity participation when so many fine strips are offered. The Broons are a large Dundonian family crammed into an impossibly small flat, and Wullie a typical mischievous, but big hearted kid. The selections from across the decades are filtered into categories like ‘Holidays’, ‘Lads and Lassies’, ‘Law and Order’ and ‘Sport’, with appropriately themed strips from each. The editorial brief remains to this day to represent the ordinary Dundee resident and give them a chuckle or two every Sunday, so these strips are fascinating insights into how people used to live. The tenement flat occupied by the Broons still had a communal wash house in the basement, most strips pre-date the spread of television, and references to “coupons” in a 1952 strip are a reminder that rationing in Britain didn’t stop until long after World War II.

The strips are rarely laugh out loud thigh-slappers, but gentler humour, largely based on creatively calculated misunderstanding, although a strict moral code operates. No-one benefits from skullduggery. Not even Grandpa Broon returning to the town he’s never visited since a childhood misdemeanour. As ever, the language is resolutely parochial, making no concessions for anyone unaware “the lum” is a chimney or “bairns” are children. Most unfamiliar words can be worked out easily enough, and that’s part of the fun. A bonus is an explanation of how a ship in a bottle is created.

Watkins was an incredibly disciplined cartoonist and had an amazing work ethic. If a strip calls for all eleven Broons in each panel, and with some Christmas features, then Watkins would draw them without shortcuts, most likely full figure as well. This would be in a week when he was also producing an Oor Wullie page and several more besides for The Beano, The Dandy and other D.C. Thomson weekly comics. The sample strip shows that he could occasionally indulge himself with memorable results. While Watkins signed the strips, the writing credits are more difficult to identify. Anything until the mid-1950s is likely to be the work of the co-creator R. D. Low, but others contributed beyond that.

Any Broons and Oor Wullie book offers a good dose of charming entertainment, and A Nation’s Favourite is no different.