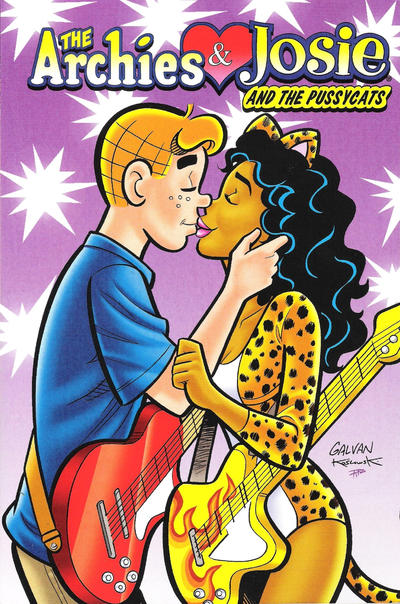 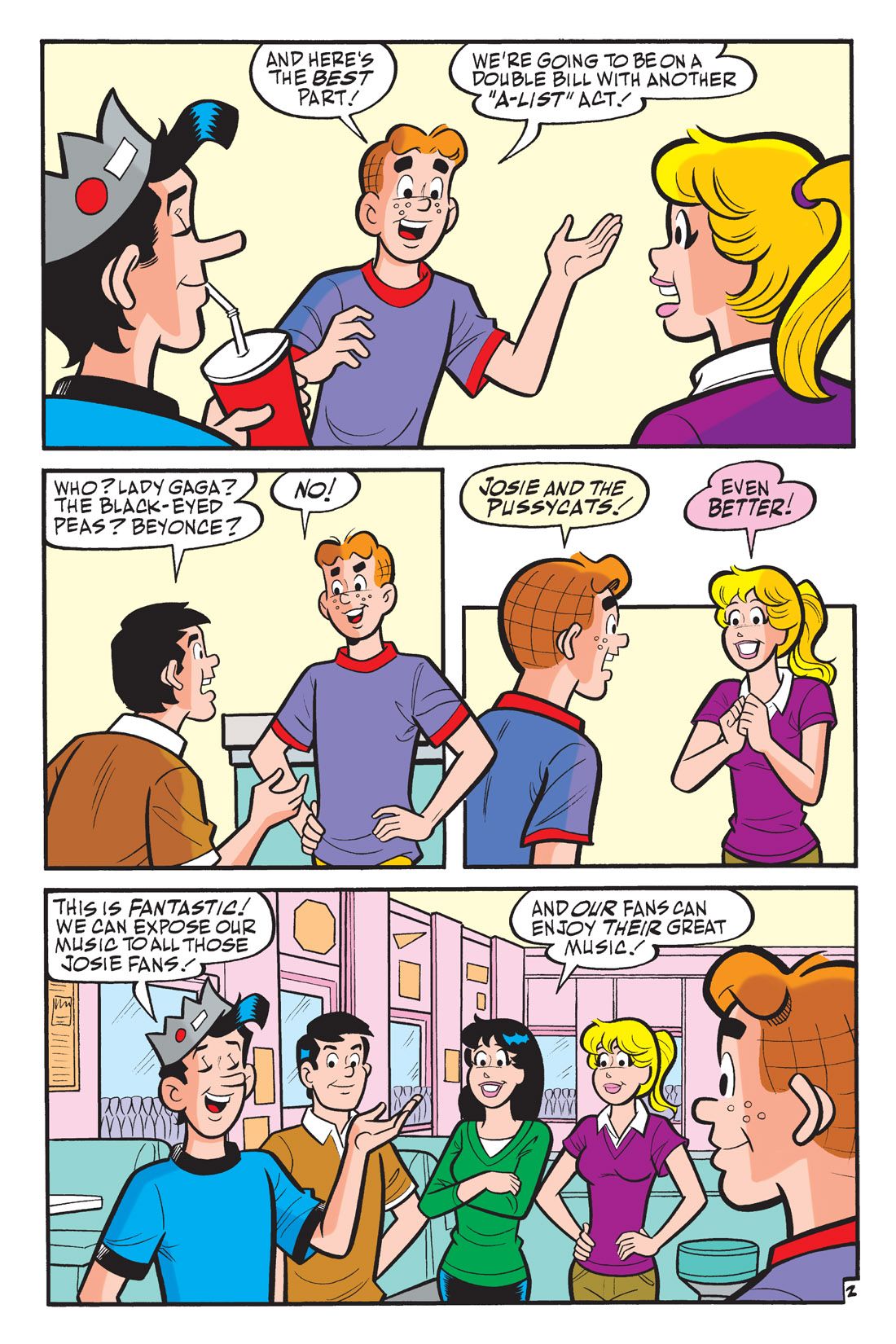 A continuing part of any long-running comic series is attempts to add supplemental stars to their four-colour firmament. A 1963 début did catch and hold the readers attention. Her name was Josie and she was created by Dan DeCarlo as a veritable female clone of Archie. The titian-haired ingénue and her best friend Melody formed a band and in 1967 her title was changed to Josie and the Pussycats. Fame, stardom, a TV cartoon series, a major motion picture and two soundtrack albums later the band were only occasional visitors in the Archie universe until someone had a cunning idea

Josie didn’t lead the only band in Riverdale. In the swinging sixties Sugar, Sugar, a pop tune from the animated Archie show became a global smash. Archie’s wholesome garage band The Archies has been a fixture of the comics ever since.

The Archies & Josie and the Pussycats collects a storyline from 2009-2010 wherein ‘It Starts with a Kiss!’ as the two clean-living bands are signed to tour together, and our red-headed star and the Pussycats’ African-American bassist Valerie are drawn irresistibly together. After a stolen kiss during a late-night songwriting session the attraction grows stronger in ‘More Than Words’ as hapless Archie tries to concentrate on his daily life – and Betty and Veronica – but can’t get Val off his mind. Moreover, the normally “sensible one” in Josie’s band is similarly distracted. Luckily for all, the tour soon ends and the girls are bound for Europe and a series of solo gigs, but the tearful farewell proves the attraction has grown into something far more serious. All the while the Pussycat’s rat-bag manager Alex Cabot has been trying to scotch the situation and now goes into overdrive in his scheming.

Dan Parent and Bill Galvan continue with the two-part ‘Love Smackdown!’, which follows the separated and lovelorn Archie and Valerie as distance, daily drudgery, temptation and Alex all operate to keep them apart. After a misunderstanding leaves the couple acrimoniously separated, a new combined tour seems destined to rekindle the fire – but do Betty and Veronica want Archie for themselves or do they want him to be happy? Moreover, what’s the deal with Valerie’s old flame Declan McCord? He says he’s just a fill-in musician, but does the charismatic Celtic pop-star have plans to win Valerie back for himself?

Star-crossed love and nigh-torrid melodrama combine with classic Riverdale slapstick in this delightful young romance that shows a burgeoning slice of maturity in the world’s favourite teenager. Don’t quibble: Justin Bieber has a limited shelf-life but Archie has been a teen heartthrob for seven decades.

This snazzy tome also has some impressive extra features including Parent’s ‘Liner Notes’, full background and histories for The Archies and Josie and the Pussycats, and ‘Once More With Feeling’, eight pages of penciller Galvan’s art and unused covers.

All the world loves a lover, and this satisfyingly enticing down-to-earth comedy-drama is a solid example of the kind of comics there just aren’t enough of these days.