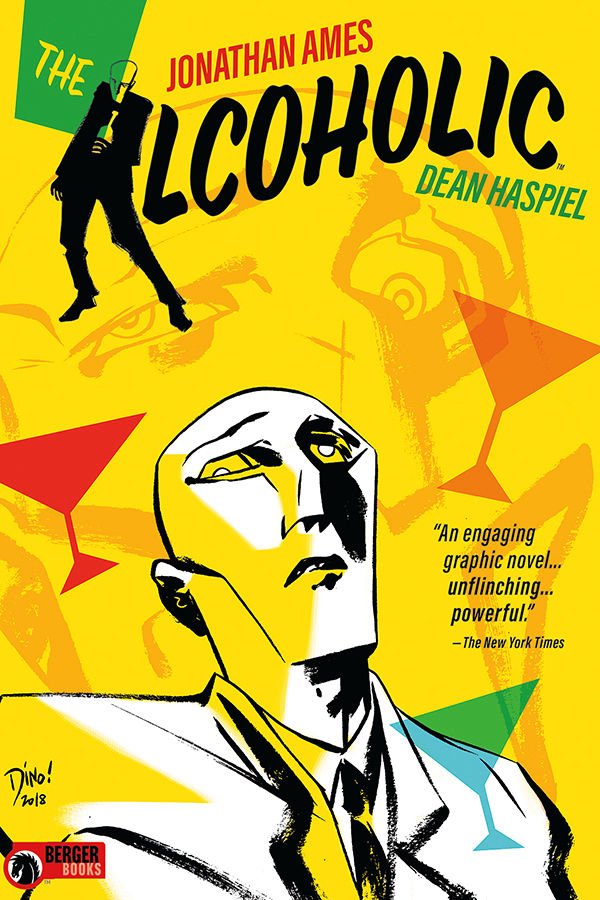 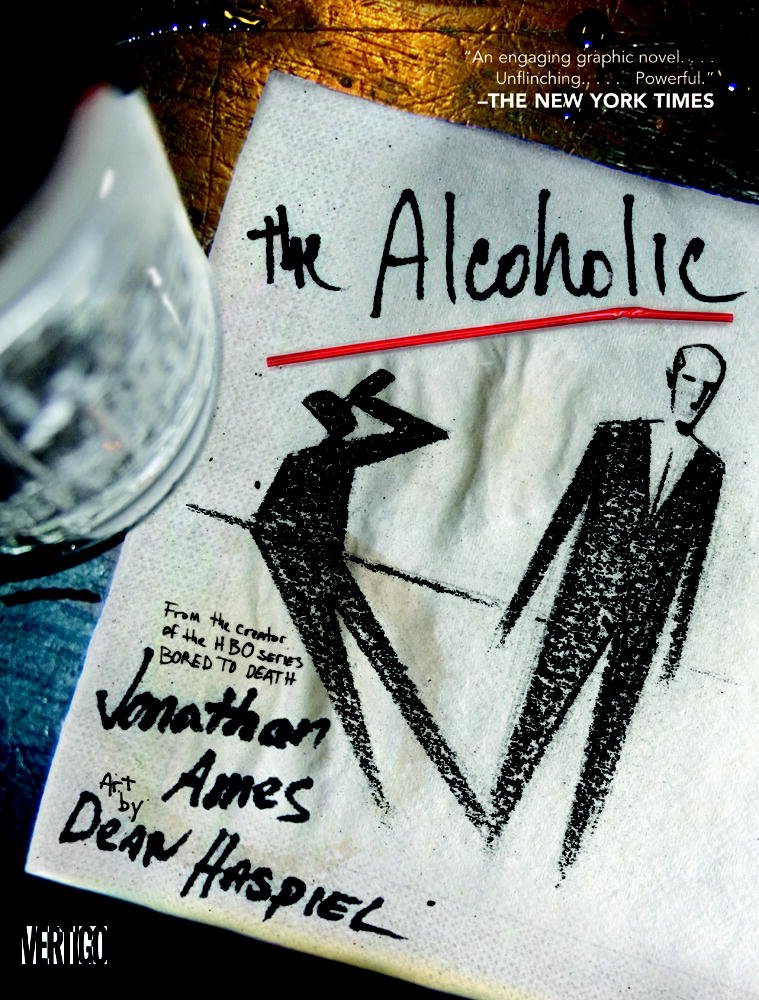 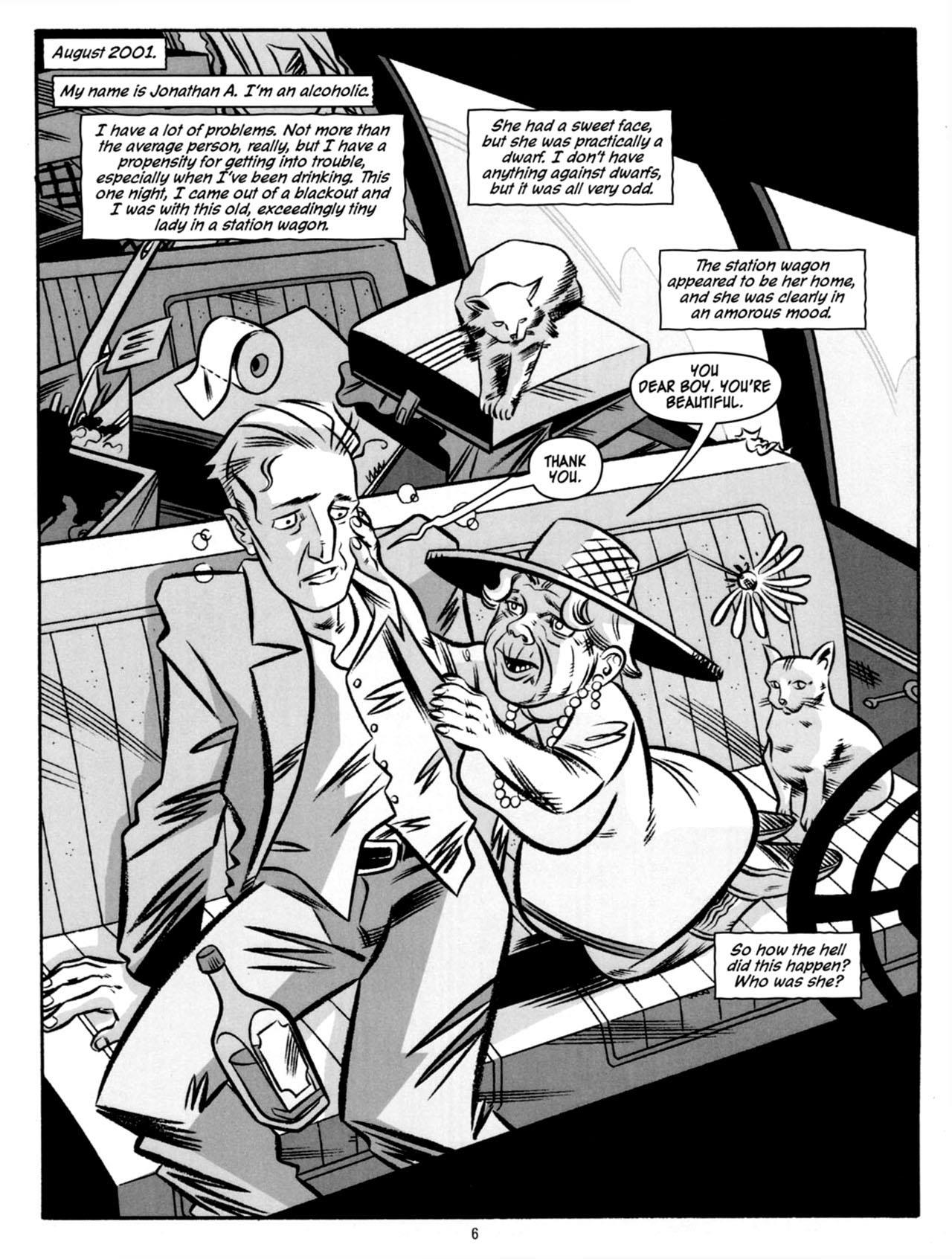 An interesting aspect of The Alcoholic is that while alcohol is a constant background presence occasionally springing into shot, the narrative relies more on the skill of Jonathan Ames as a raconteur as he spins through his life. It’s a life well lived, yet not very different in social terms from many of ours. He’s experienced the disappointments and the tragedies along with the elation and the hope, and refers to his progression through the years as “a constant stumbling forward with a reel of memories always unspooling”. His manner of relating these events, while not distilling an epic quality, certainly renders them far more readable than many autobiographical graphic novels.

A lot of that is down to Dean Haspiel’s art. It evokes a real world without being in any way realistic, and his pages have a real charm and character-building panache about them. When older people feature Haspiel supplies a warm dignity, and he’s delicate with excess.

That Ames is a natural raconteur is obvious from the opening page (see sample image), adopting a laconic self-awareness for the first half of the book, and acknowledging the dive into self-pity for the second. The confessional aspects have a sincerity, whereas others might have bolstered a lack of self-esteem with a more boastful tone. There’s a lack of embarrassment about the memoir from the trivial vanity of the Bobby Charlton comb-over to the frank admission of being a less than satisfactory lover, but this is accompanied past the midway point with a constant side-helping of angst.

At what point does having a good time on a regular basis descend into a problem? It’s the question every recovering alcoholic eventually has to face. For Ames it was a problem from the start. His drinking was initially furtive, and in the recollections provided never appears to have resulted in a particularly good time. That’s further compounded by not being able to hold his alcohol, and memories of vomiting are frequent. The turning point came when waking up naked on a gay drug dealer’s floor with his head and torso in a dustbin following another vomiting session.

It’s at the halfway point that the title really kicks in. After years of abstinence an unfortunate relapse leads not to shock and further restraint, but a self-destructive headlong plunge aided by the discovery that vodka didn’t result in hangovers and vomiting. This is exacerbated by the events of 9/11, at which point the narrative loses its glib veneer. Ames was around to write the book in 2008, so for the reader if not the writer there’s the hope of a future. Even within the despair the engaging tone is sustained, although punctuated by maudlin interludes as Ames discovers there are things he likes more than alcohol. Everything winds towards a brilliantly uncertain conclusion after what for many would be an obvious revelation.

The old entertainer’s adage of “always leave them wanting more” applies to The Alcoholic. A brief online search will reveal Ames’ continued creative success, but the only conclusion in life is death, so why should we expect a life still being lived to be tied with a bow?