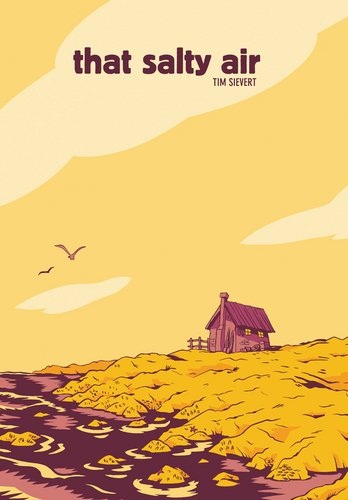 Hugh is a simple man who lives a simple life in small remote house, shared with his wife Maryanne on the shore from where he makes a living fishing with net, rod and line. He’s a man who relishes his time at sea, unable to conceive of any better life, and unaware that beneath the waters on which he launches his boat every morning there lurks an octopus so large it confidently takes on whales.

His lifestyle is destroyed on the day he receives a letter announcing that his mother has drowned at sea, and this news similarly affects his attitude. He declares war on the sea, and departs for town to tie on one tremendous drunk. It’s telling that his wife has also received a letter, but he doesn’t stick around long enough to learn the content.

Tim Sievert’s approach is fundamentally based on mood. His story is simple, but he ekes it out via repeated passages of stormy seas, inclement weather, and of what occurs beneath the surface, presumably a metaphor for Hugh’s own personality and why he has such an affinity for the sea. The ratio of black to white also increases as Hugh’s mood darkens. Sievert’s art is successful in evoking isolation rather than independence, spiritual or otherwise, as other troubles beset Hugh.

This isn’t an easily told tale of redemption, but more one of ordinary people coming to terms with circumstances. No-one can be sure what’s to be thrown at them in life, and everyone behaves differently under pressure, but loss is universal. However, Sievert hardly goes out of his way to make Hugh a likeable protagonist. Yes, he has his problems, but deals with them selfishly. Perhaps its deliberate contrast as there is a point that Hugh learns what he really values, but it doesn’t transmit well.

That Salty Air is a quick read, the emotional turmoil introduced and resolved relatively rapidly, but it’s a promising first graphic novel. Going by the content of his webcomics it’s also atypical for Sievert.