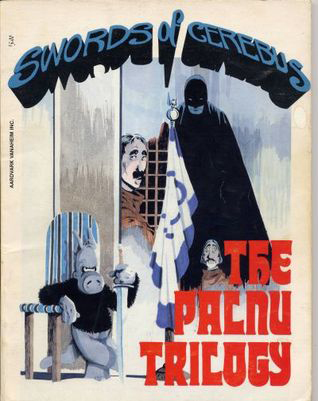 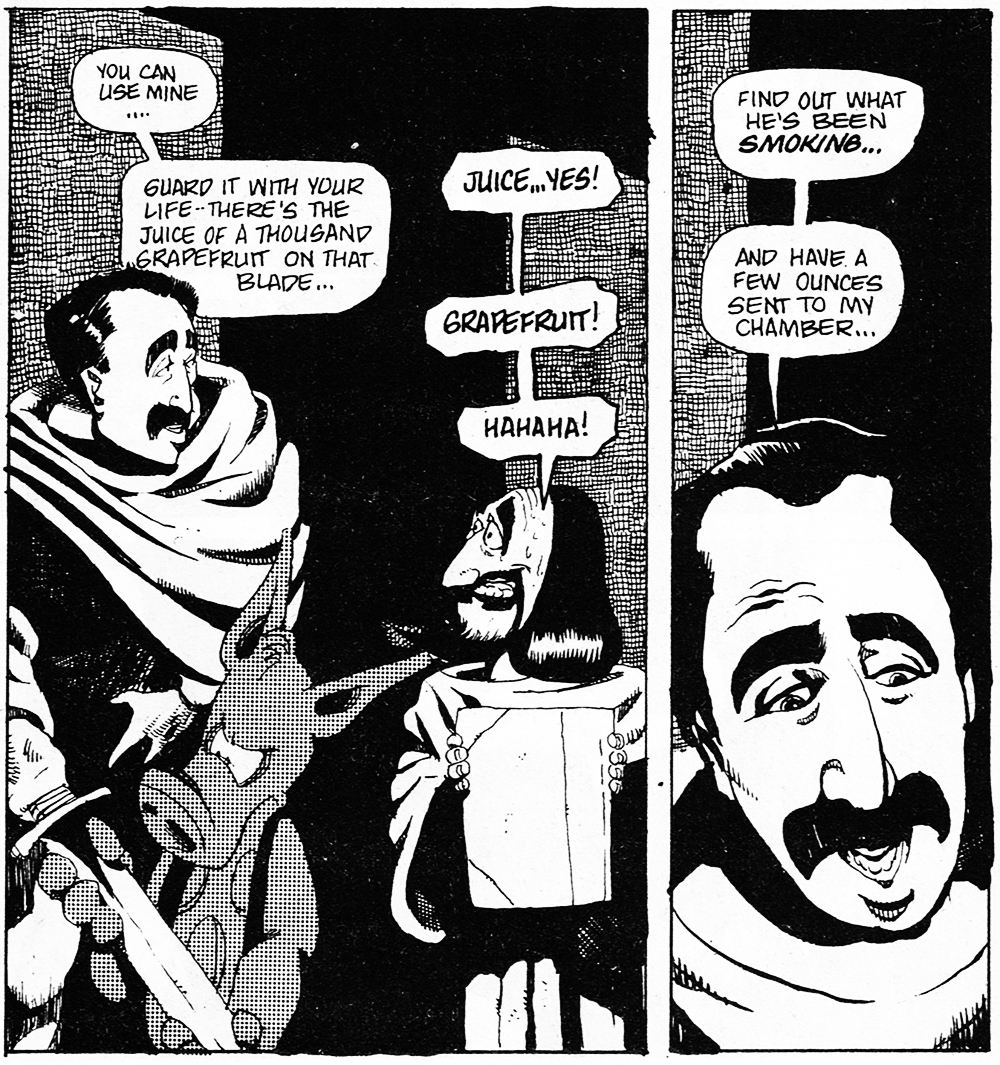 Volume four of Swords of Cerebus kicks off with bonus material in the shape of ‘Magiking’, a ten-page story not included in the Cerebus collection otherwise featuring the remainder of these stories. Commissioned, but never before published, this attempts to explain some of the workings of the society in which Cerebus exists, and was written with a slightly younger audience in mind than the usual reader.

‘Black Magiking’ takes us back to typical Robert E. Howard-flavoured territory when we encounter a more malignant wizard than the one appearing in the previous short story. Necross the Mad, and his giant stone golem (orange, just in case the reference isn’t obvious enough), would, like most characters from this era of Cerebus, appear further down the road to play a part in the aardvark’s life once more.

Then we’re into what the cover proclaims to be The Palnu Trilogy. This trilogy has four parts, and the first, ‘Silverspoon’, is a reprint of eleven single pages that had originally appeared in the Buyers Guide for Comic Fandom. A pastiche of Hal Foster’s Prince Valiant, this story introduced Lord Julius of Palnu, who was basically Groucho Marx (real name Julius). These eleven pages weren’t originally included in the Cerebus collection. This was apparently an oversight, but one that wasn’t corrected until the eleventh printing, when they were inserted in the appropriate place.

In ‘The Walls of Palnu’ Cerebus is appointed by Lord Julius to be his Kitchen Staff Supervisor. Job titles are meaningless, and the structure of the government is kept deliberately impenetrable by Lord Julius, who more than looks like Groucho, but talks and acts like him too, giving Sim ample opportunity for lots of comedy shtick between Cerebus’s action-packed and dramatic attempts to discover the assassin who has made an attempt on Julius’s life.

‘A Day in the Pits’ features a couple of Sword and Sorcery staples: an underground city and a giant snake. Sim was well aware that these elements, though faithful to the source material, were veering dangerously close to cliché, something that Howard himself would also struggle with in the Conan stories, which quickly exhausted most of the tropes of the genre and began to repeat themselves. However, this is well crafted, and Lord Julius’ inclusion for most of it guarantees a fair number of laughs.

‘A Night at the Masque’, the concluding part of the trilogy, is broad farce yet again, set at a masked ball where Cerebus goes dressed as “an aardvark wearing a furry black shirt”.

It was during this time that Cerebus went from bi-monthly to monthly publication, and the improvement in both the artwork and writing is readily apparent. The sixty-page Palnu Trilogy is the most ambitious story yet by Sim, and one that he pulls off with some skill. The combination of pulp adventure and political satire works well, though Sim would soon abandon the tired trappings of the former to concentrate on the latter.