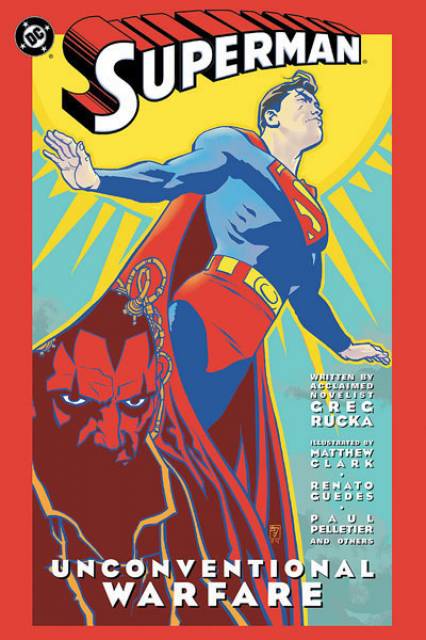 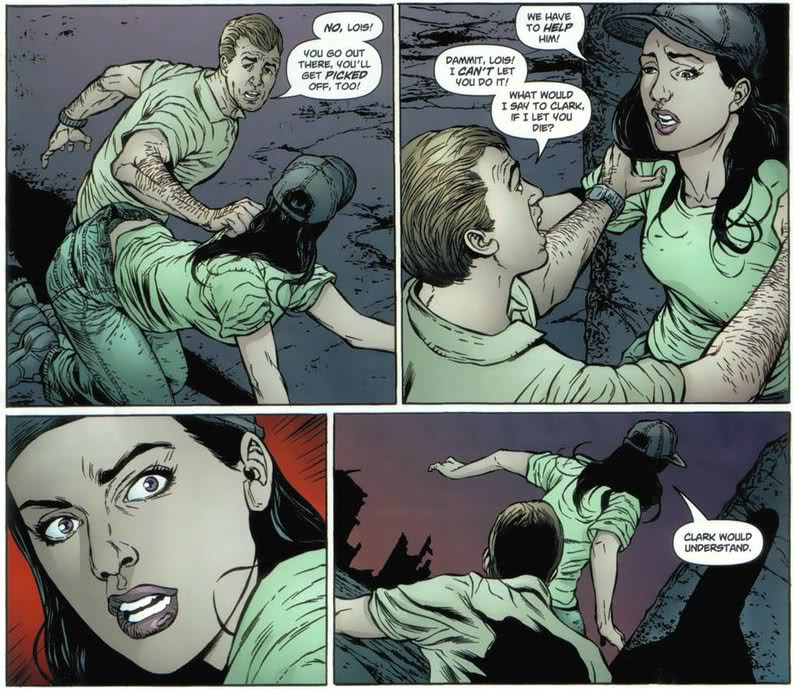 Early in this book there’s a Superman scene followed by a Clark Kent scene, each exemplifying Greg Rucka’s take on them. A little girl becomes separated from her mother as her attention is caught by a TV news report about Superman’s rescue activities following an earthquake. Superman reunites the pair, and the mother thanks him, remarking that he must have better things to do. “Not really”, replies Superman. It’s iconic stuff that establishes Superman’s humanity, something often sidelined. When we see Kent he’s bumbling away moving into a new office and apologising for the delay. Rucka surely draws his inspiration from Christopher Reeve’s 1970s movie portrayal, but artist Matthew Clark plays his part, ensuring Kent’s posture matches his dialogue. When a new character comments on Kent as a loser she’s shot down by a wiser head.

Rucka’s handling of Kent throughout his run is superb. Without ever showing his hand, Kent subtly pushes and prods and guides, and people are improved via contact with him. Rucka also provides an interesting take on Lois Lane. Her fearless journalistic attitude towards gathering a story had already been established, but it’s touching to see her request Wonder Woman keep an eye on Superman while she’s away overseas.

That’s on a mission to Umec, Rucka’s stand-in for Iraq at the time that was being invaded by the USA and allies in the real world. There’s no political statement beyond Lois involving herself in the experiences of typical troops, and parallel narratives develop as both she and Superman face what appear insurmountable odds.

This is a story of introductions, not just to Rucka’s take on the cast, but to the formidable Lieutenant Lupe Leocadio, brought in to modify the Metropolis Special Crimes Unit, and to Ruin, a major new villain. His part here is actually minor, although he reveals his hand, as Superman has to deal with Replikon and Mr Mxyzptlk. The latter is a 5th dimensional imp able to warp reality to his desires and only defeated when tricked into saying his name backwards, and it’s not unreasonable to assume he has no part in the 21st century Superman mythos. Yet Rucka’s interpretation of this throwback to the whimsy of early 1960s Superman is as akin to the manic madness of a Chuck Jones cartoon and it works very well indeed.

Sadly, it takes three pencillers to produce six chapters. Clark remains a sadly under-rated artist. His action scenes are compelling, his layouts dynamic, and his non-powered cast immensely believable, and much the same might be said for Renato Guedes. Unfortunately the final chapter, that most in need of a human touch throughout, is pencilled by Paul Pelletier. While in no way bad, his Superman is far more the heroic archetype.

There’s no definitive ending here. The story rolls into That Healing Touch, with one primary plot still hanging by a knife edge. 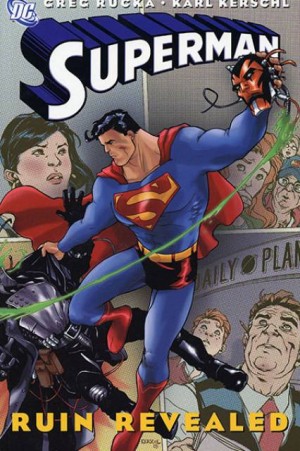