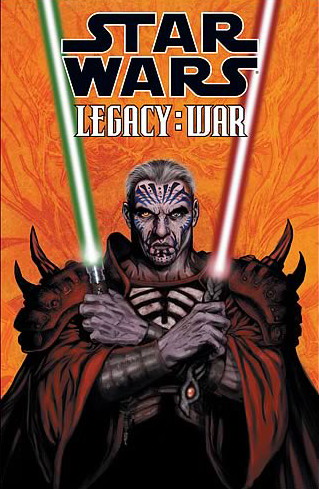 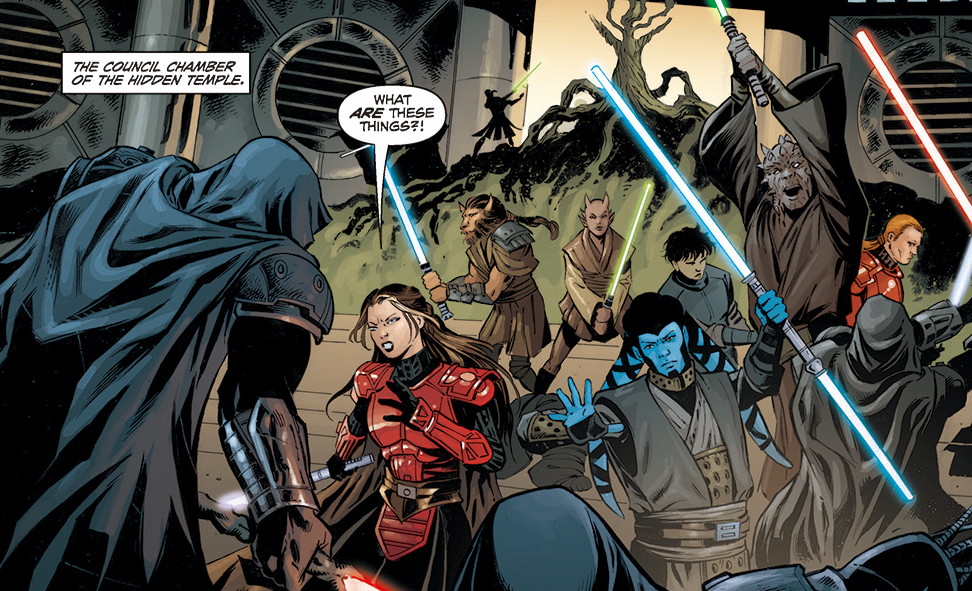 Throughout the Legacy series co-plotters John Ostrander and Jan Duursema have captured the thrills, intrigue and adventure that characterised the original Star Wars films, and this is where they draw all their plots together. One reason for their success is that they’ve taken the background of that original trilogy and applied it 132 years into the future, adding a few complications of their own devising. It’s been an exciting ride, and while the conclusion has its casualties, anyone who’s read the remainder of the series should be immensely satisfied.

Events in Extremes rather set the assorted forces spotlighted on one course. The more noble gatherings and their allies sense a weakness in the Sith who’re ruling the Empire with an iron hand, while the Sith’s immediate underlings are increasingly disgruntled. The volume concluded, though with the Sith loyal to Darth Krayt receiving a considerable boost. As all this occurs Cade Skywalker is experiencing troublesome dreams that appear to lead to a final battle and his own demise, but not before he’s killed allies.

The deposed Emperor Roan Fel has been a particularly well defined character throughout. Certainly not a man who’ll shy from a decision others may consider unpalatable, there’s also a nobility about him that sets him apart from the Sith. His part throughout has been maintaining his position, but the interesting aspect is the motive behind this, whether it’s personal power or the good of the galaxy. That’s never been clear, but the revelation occurs here.

Considering the large parts they’ve played in the continuity, War is actually the first time Admiral Stazi and Cade meet, and as the battle continues Cade is inexorably drawn to Darth Krayt for the final showdown. He’s one of several loose cannons with a seeming death wish, and the narrative tension applied by the constantly shifting sands is sustained until the end.

As has been the case throughout, Jan Duursema’s pencils, as inked by Dan Parsons, are integral to the thrilling pace of the stories. She provides imaginative layouts, consistent likenesses spread over in excess of a dozen regular cast members and a willingness to spend time detailing the hardware required.

This material can also be absorbed along with the previous three collections in the third small hardbound volume of Star Wars Legacy Omnibus. A second series of Legacy rapidly followed this conclusion, but by other creators and focusing on the Solo lineage.