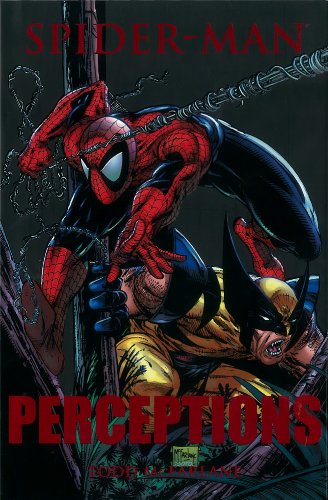 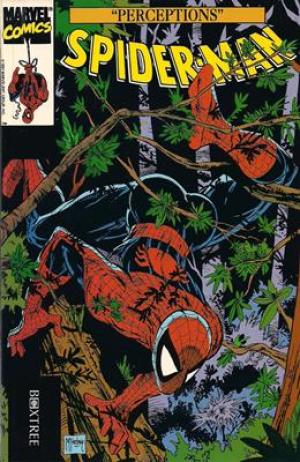 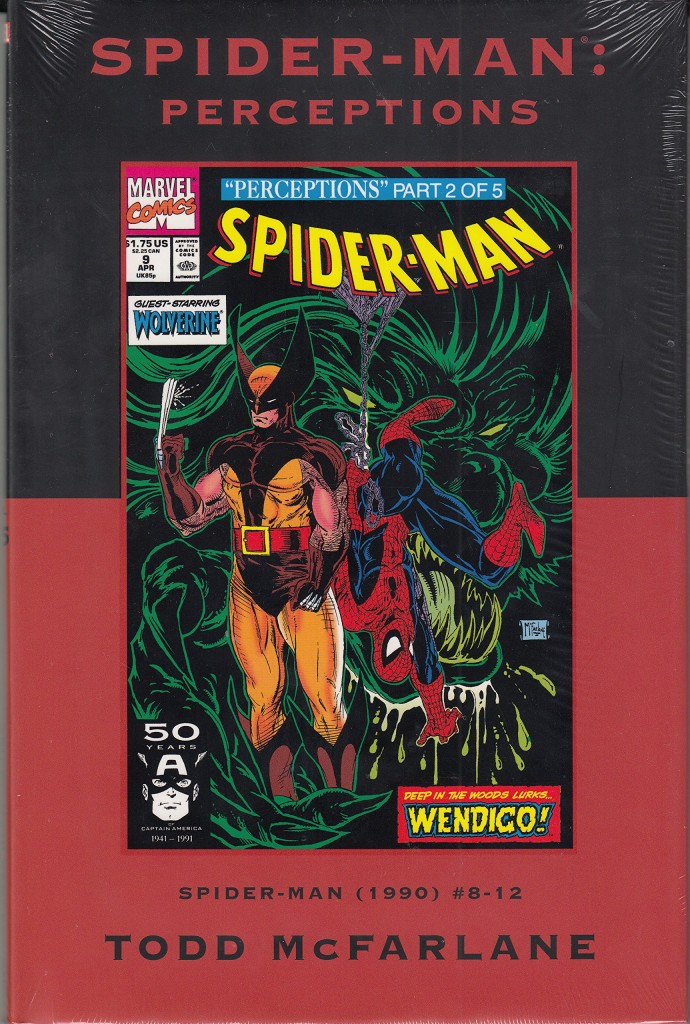 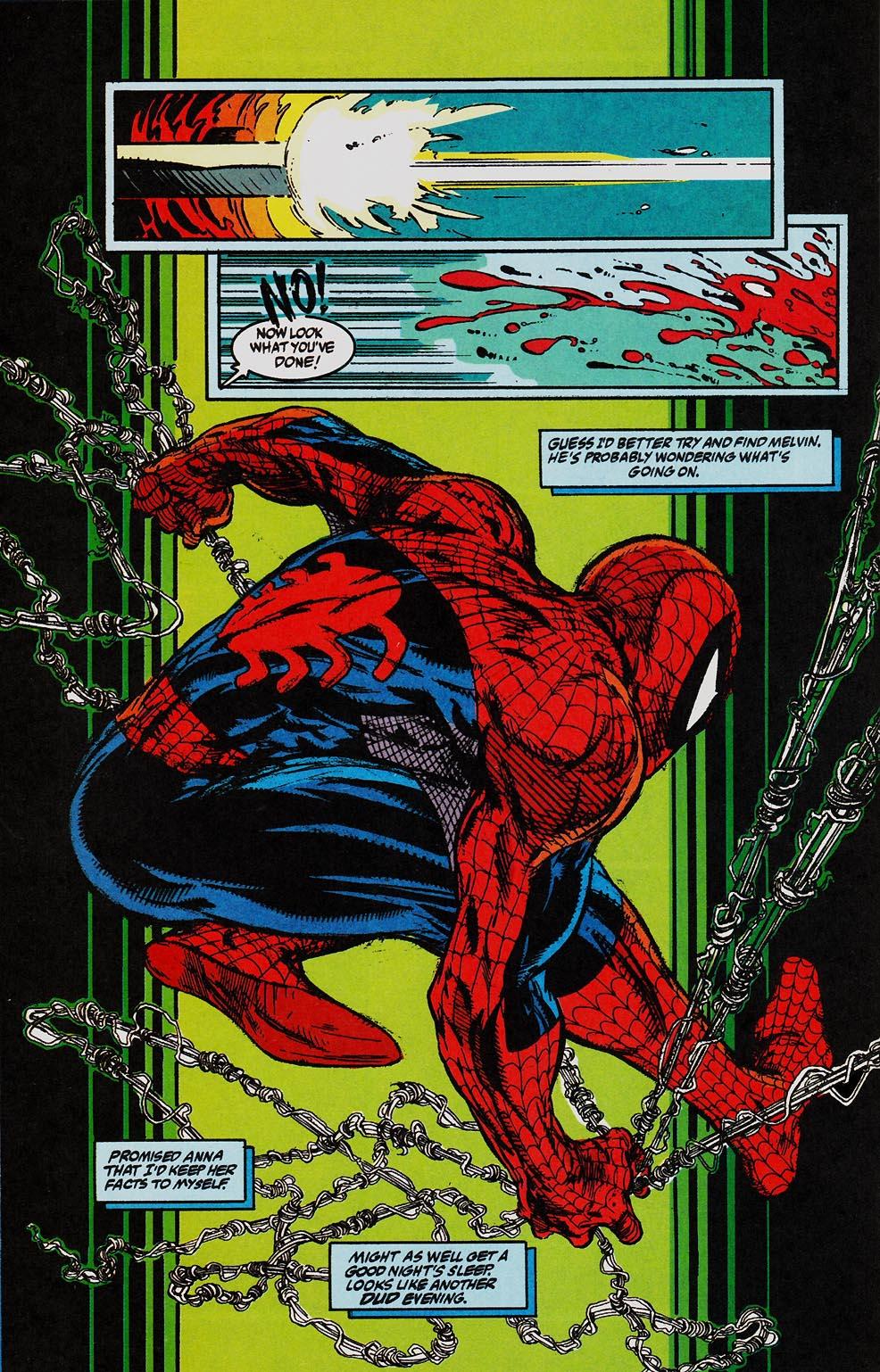 Perceptions is the best of the three Spider-Man graphic novels written and drawn by Todd McFarlane, and that’s down to the pretty simple difference of McFarlane being interested in telling a story. In Torment and Masques there was more often a feeling of McFarlane drawing whatever pin-ups he wanted and then laying some words over them.

There’s a savage killer loose in the woods of British Columbia, and as he’s shown in the opening pages we’re led to believe it’s Wendigo, a creature strong enough to have fought the Hulk to a standstill, yet one that survives on instinct, not intellect. Wolverine, who’s also fought it in the past is on its trail, and Peter Parker has been sent by the Daily Bugle to come back with photographs of what’s shaping to be a sensational news story. McFarlane uses the story to convey some thoughts about the differences between city dwellers and those who live in the countryside and their conflicting thoughts about nature. This is the background to no-one believing Peter Parker when he provides an explanation to events, and of course, it all filters into the story title.

The story requires several new supporting characters, and McFarlane’s cartoon approach works well in characterising them, particularly a bulky police officer used to eating doughnuts in his office all day and a grizzled local trapper. His Wendigo is also well designed, based on the matted fur iteration previously seen, but now a creature straining against confinement by panel borders. Late in the book there’s a great illustration of the Wendigo that’s exactly the type of pin-up page McFarlane scatters throughout his other material, but more interesting, although what’s meant to be a smirking Wolverine in the bottom corner comes across more as a smoking Batman. Perhaps this is a deliberate joke as McFarlane drops in a Batman reference a couple of pages later. By this time, though, the art’s back to its default setting and nowhere near as capable as the opening chapters, and by the end there’s some really idle illustration.

As he went along, McFarlane was learning to write. There’s some wit about the script in the early stages, and a structured plot, if one that’s still considerably over-extended at five chapters. The truth of matters isn’t the point, but will still surprise, and McFarlane guides attention away from the guilty party well. This isn’t a masterpiece, but it’s several notches on the quality ladder above its companion graphic novels Torment and Masques. All three can also be found as Spider-Man by Todd McFarlane Omnibus. 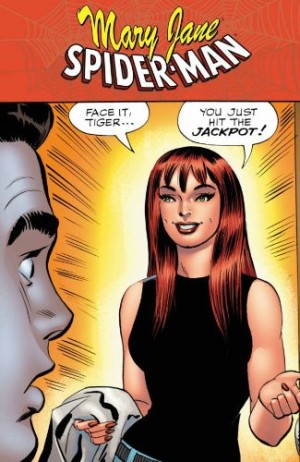 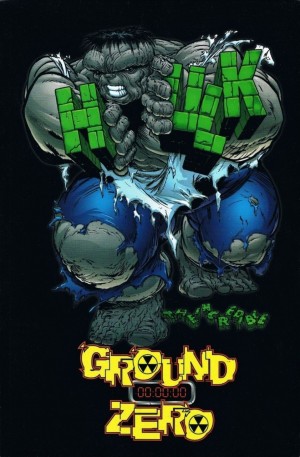