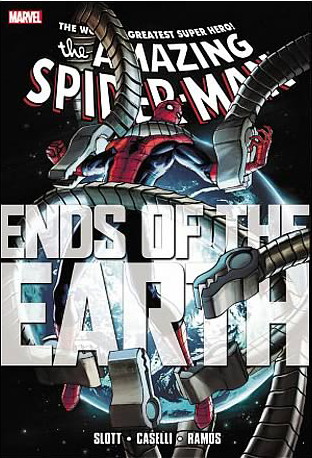 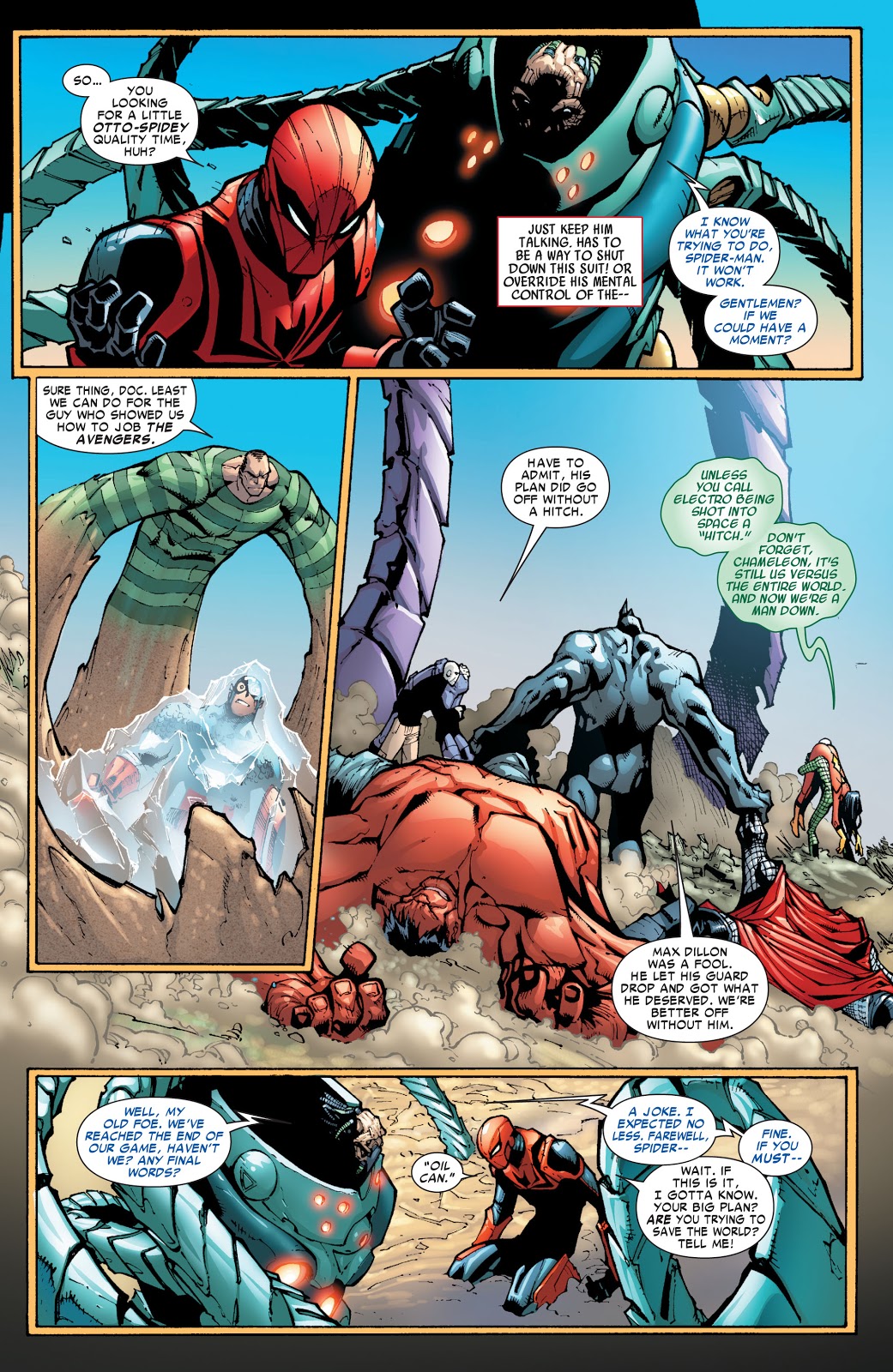 Over the course of several previous volumes it’s been established that one of Spider-Man’s oldest foes Dr Octopus is dying. He’s been aided by a re-constituted version of the Sinister Six, and in this volume his slowly simmering masterplan appears to come to fruition.

There’s initially an almost universal acceptance of Dr Octopus’ stated intention to end global warming once and for all as his legacy, and he sells the idea in convincing fashion, proving interestingly divisive. Despite his villainous past few doubt his sincerity, and even Spider-Man is acting on instinct rather than evidence. For the main narrative he, Black Widow and Silver Sable stand together against whatever Dr Octopus and his allies can throw at them.

Dr Octopus once maintained an identity as the Master Planner, and writer Dan Slott seizes on this to amplify his credentials. He’s taken Spider-Man’s association with the Avengers into account, and devised methods for his Sinister Six to deal with the situation. It provides an entertaining chapter, and deprives Spider-Man of allies he’s involved logically without smacking of plot contrivance.

A theme Slott explores in both this run and the succeeding Superior Spider-Man is the versatile application of technology, both newly developed and that already at Spider-Man’s disposal. He integrates the work Peter Parker has been carrying out for Horizon labs with the everyday use of the resulting developments and with regard to targeting the specific weaknesses of the Sinister Six. The Horizon labs staff are a constant background presence adapting to changing circumstances. That’s all well combined, but mid-way through the story there’s a revelation about the technology that’s top drawer.

The surprises come thick and fast, and in terms of epic stories this works far better than the more acclaimed Spider Island. The villains, their motivation, their use and how they’re dealt with are all consistently entertaining, and both Stefano Caselli and Humberto Ramos have been illustrating Spider-Man for some while. Their contrasting interpretations are dynamic without ever sacrificing storytelling. There is an unfortunate recourse to a character dying as a means of ramping up emotional empathy and emphasising the cost of saving humanity, but while un-necessary the demise is far from definitive. It leads to a coda co-written with Ty Templeton revealing a previously untold tale, well drawn by Matthew Clark.

Also included is a chapter focusing on assorted global heroes Spider-Man convinces to help him out, at the time, for the most part obscurities, a state that no longer applies to Big Hero 6. They’re all tasked with locating Dr Octopus’ operation in their country, and warned that he’ll have people defending his bases. Rob Williams deals with everyone but Big Hero 6, who’re written by Brian Clevinger, with Thony Silas pencilling the lot. As a bonus here, fine, but as $3.99 comic, oh dear.

Slott’s fine work continues with Lizard – No Turning Back.