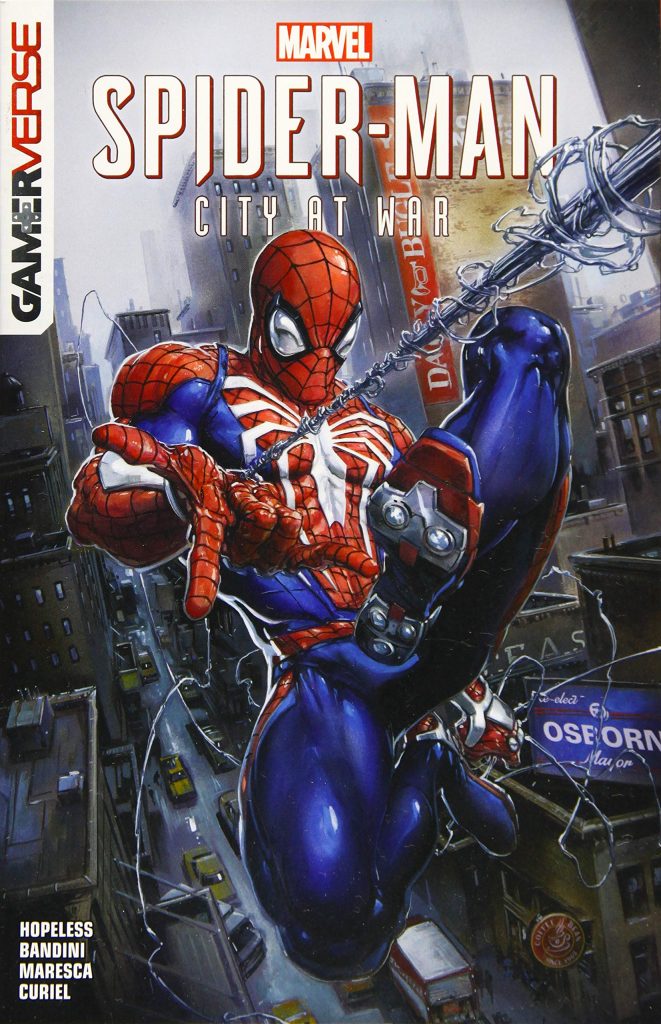 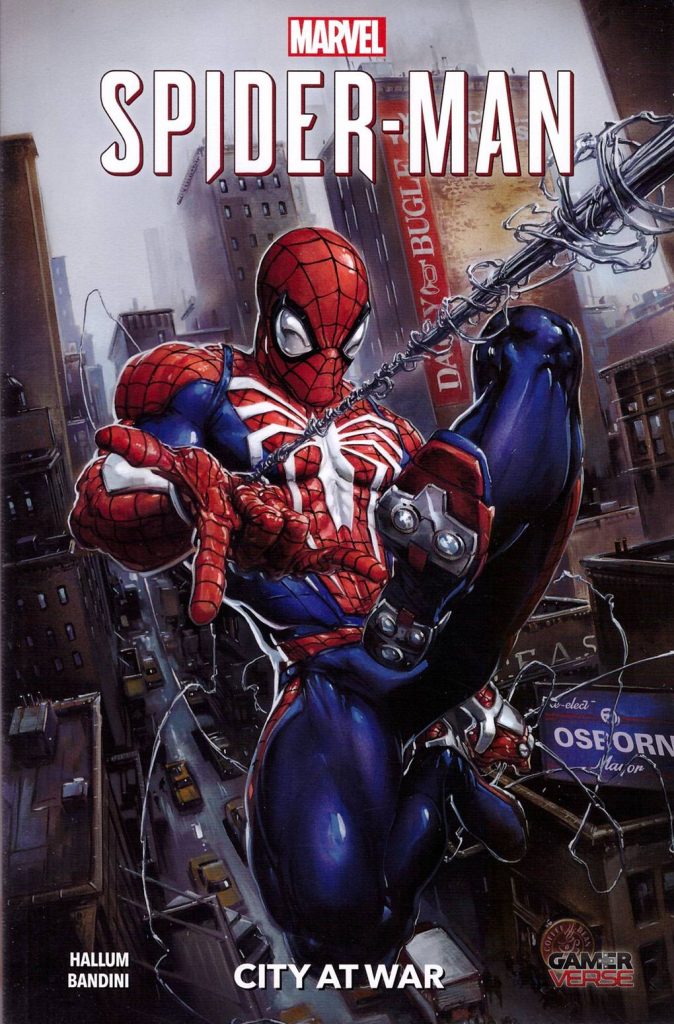 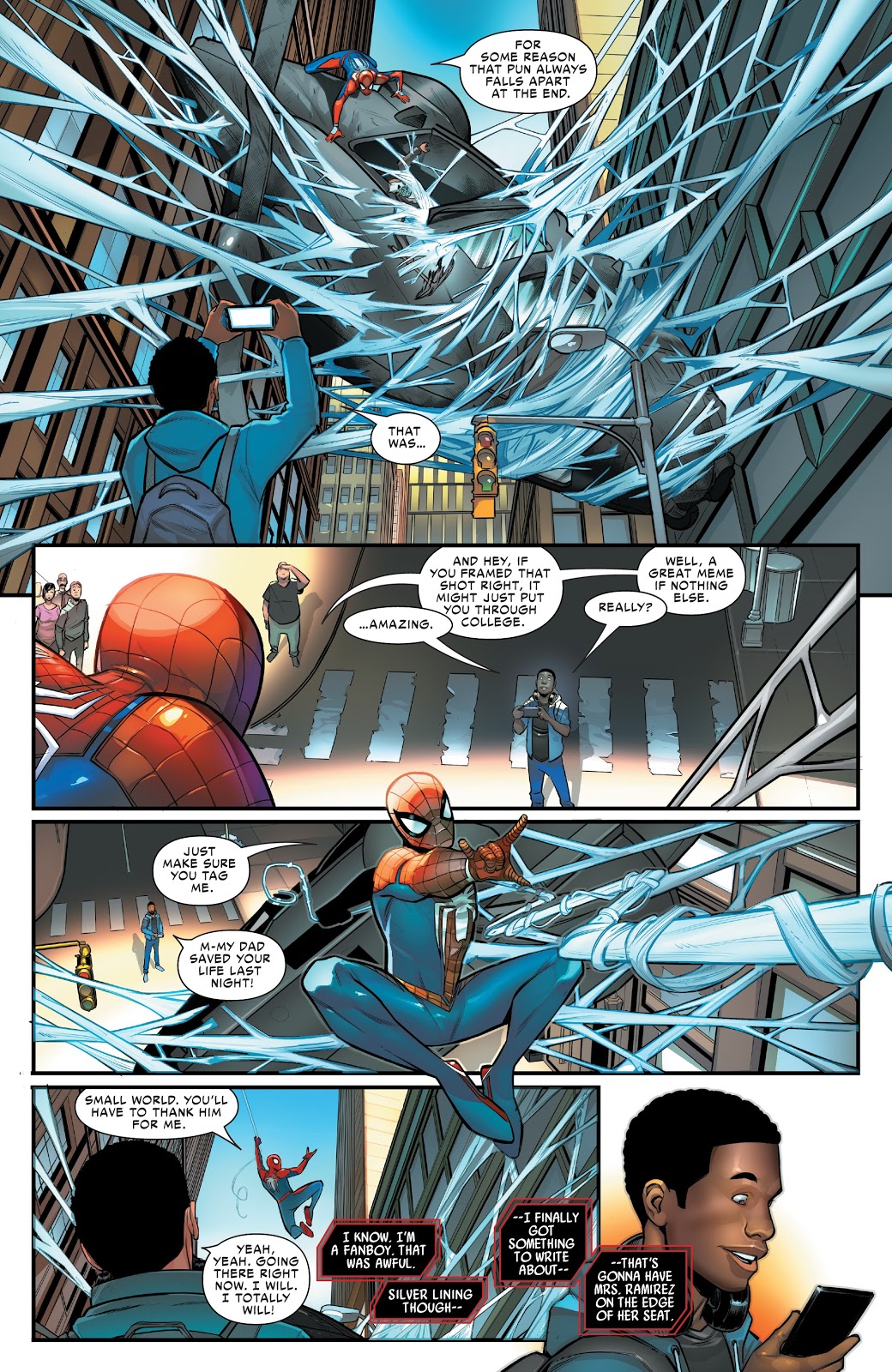 City at War is based on the game of the same name, here allocated it’s own Earth in the Marvel multiverse. That means it’s Spider-Man, but not necessarily as we know him. Except it turns out the differences are superficial. Peter Parker is still Spider-Man, but he works assisting Dr Otto Octavius’ scientific research. Aunt May is around, and so is Mary Jane Watson, dogged reporter for the Daily Bugle. Don’t blame Dennis ‘Hopeless’ Hallum for the lack of divergence as he’s tied by the game, and who wants to play a game where Spider-Man is your 22 stone Uncle Tyler?

However, Hallum does have some surprises in store, not least for one Miles Morales, and some for the readers, in this case more to do with lapses in logic, clumsy storytelling and strange leaps. To end one chapter Peter and Miles don’t know each other, yet by the start of the next they seem to have been friendly for a while. Mary Jane’s able to hear some thugs talking about a location in a moving car from what seems fifty yards distance. Later she’s confronted by one of the villains who for some reason decides to take her all the way from Central Park to Central Station. There are other examples beyond those, as if pages providing the explanations have been ripped out somewhere along the way. Is it because the story is hopping between scenes from the game and needs to be read in conjunction? If so, it’s short-changing the graphic novel readers.

These moments constantly distract from what’s otherwise a sprightly story featuring several villains and viable deadly threat. Primary artist Michele Bandini (five out of six chapters) is fine at supplying character and web-slinging action, particularly with Dr. Octopus, although he takes the modified designs for familiar characters from the City at War game. Luca Maresca’s single chapter is a little busier, but still good action art.

By the fifth chapter some captions explaining establishing times are being used, removing one confusion, but the timescales Hallum uses in story still don’t compute. In one sequence a character is injured in one location, somehow found by the emergency services, and taken to a shelter where they’re operated on. Meanwhile Doc Ock has spent those several hours in the same place swinging someone around outside a skyscraper. More time passes and Doc Ock’s still not finished ranting to his victim in the same place. The constant intrusive lack of logic distracts. Even knowing the timescales, it’s a jerky story, and that serves to diminish what’s a grim danger, which used better would supply tension. City at War’s basic plot is decent enough, but the execution is ham-fisted, and with three editors credited that’s inexcusable.