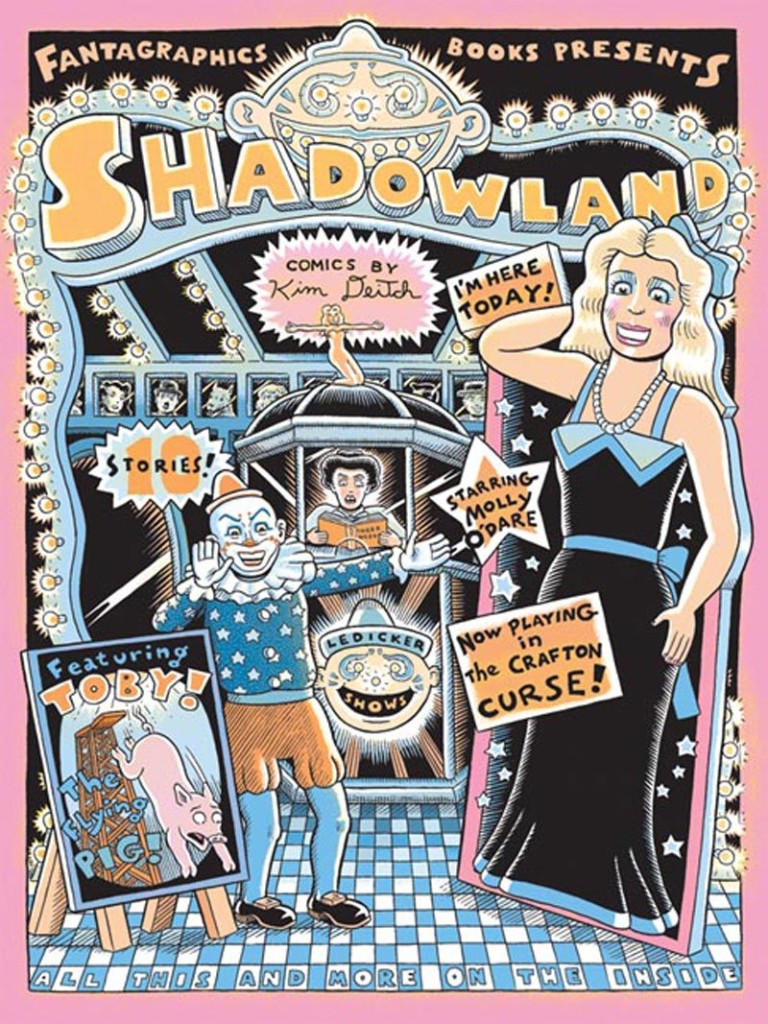 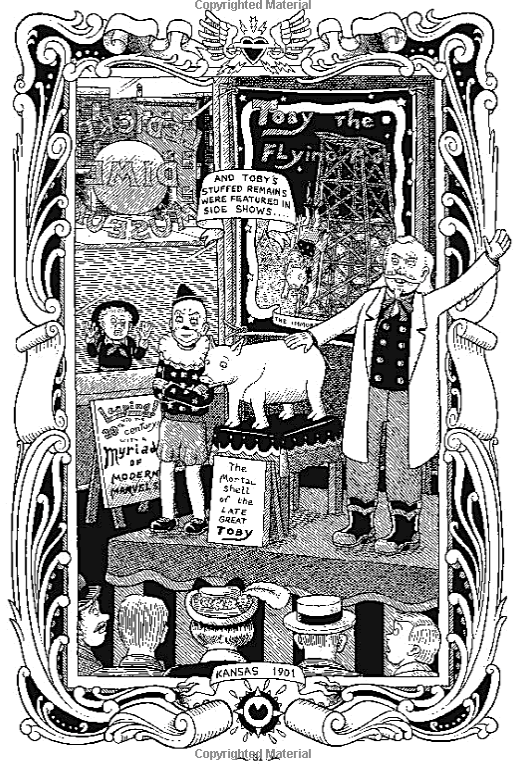 Shadowland gathers a number of Kim Deitch stories published as pamphlets, or in left-field anthologies such as Raw and Weirdo. Together they form a larger narrative centring on the ‘colourful’ Ledicker family.

The character stories collected as Boulevard of Broken Dreams together gave a kaleidoscopic picture of the animation industry in America.  Here Deitch does the same for the shady world of carnivals and side-shows, while spilling into movies and other dark arts.

A fascination with classic American popular culture is hardly unusual in alternative comics – take for example Charles Burns and Kaz – but Deitch started earlier, goes deeper, and is perhaps unique in following threads across forms and eras.

He sets the sinister tone of the book in his introduction, revealing a connection to convicted serial killer John Wayne Gacy, and the influence of his disturbing clown make-up.

The story begins at the close of the 19th Century, with Al Ledicker boss of a successful carnival, and Al junior still a child, but already in his Gacy-style clown makeup. ‘There’s No Business Like Show Business’ gives a twist to the cliché by being about a performing pig –  with a commitment to his role exceeding the most dedicated method actor.

The other stories cover different time periods as the rich cast of characters add their strands to the story. ‘Murder on the Midway’ is told by the now elderly Kewpie – midget performer, and wife of Al junior. The forty page ‘The Crafton Curse’, covers Al junior’s growing up with his aunt and reluctant guardian Lady Wyndham. She provides for orphaned girls at a convent which also feeds into her business in what we might euphemistically call ‘personal services’. This story also introduces ingenue Molly Crafton, latest recruit at Wyndham Manor, and later a movie actress.

We’ll find out more about her in ‘The Strange Secret of Molly O’Dare’. It starts with Deitch going to see an old film, ‘The Fairy Ball’, which stars Molly O’Dare. He tells us he had thought her fictitious, just an invention of his missing-presumed-dead writing partner Fowlton Means. This prompts Deitch to illustrate an earlier manuscript by Means, revealing the secrets of the mysterious ‘Grey Ones’, and the fabled land of Ranna Poona. Means is credited on Deitch’s most far-fetched stories, but we see him here receiving Means’ manuscript in the post, so it must all be true, right?

In the background of all this is an unofficial, seedy, history of the USA, complete with the Ku Klux Klan, embezzling politicians, secrets of hidden fortunes, love and lust – and where nothing ever runs smoothly. In these pages there are people who are ingeniously amoral, and some who manage to remain decent and innocent to the end. Deitch tells all these stories with a light touch and an infectious enthusiasm for the subject matter.

This is some of Deitch’s best artwork – figures are simple, pages are intricately composed and it’s rendered in his trademark smooth lines and razor sharp hatching. One story is told in a series of intricate full-page images, each with a unique decorative border – nicely mimicking period carnival posters (pictured). The inking quality slips towards the end, but by then you’ll be too deep in the story for it to put you off.

Deitch has never achieved the level of success he deserves, but he’s created one of the most beautifully realised, haunting and unique oeuvres in American comics.