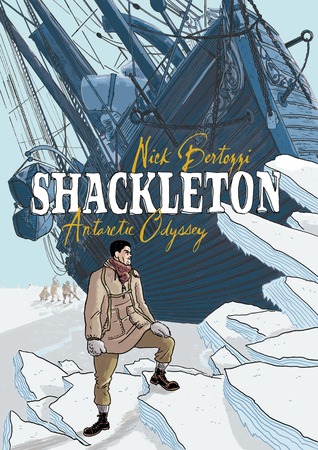 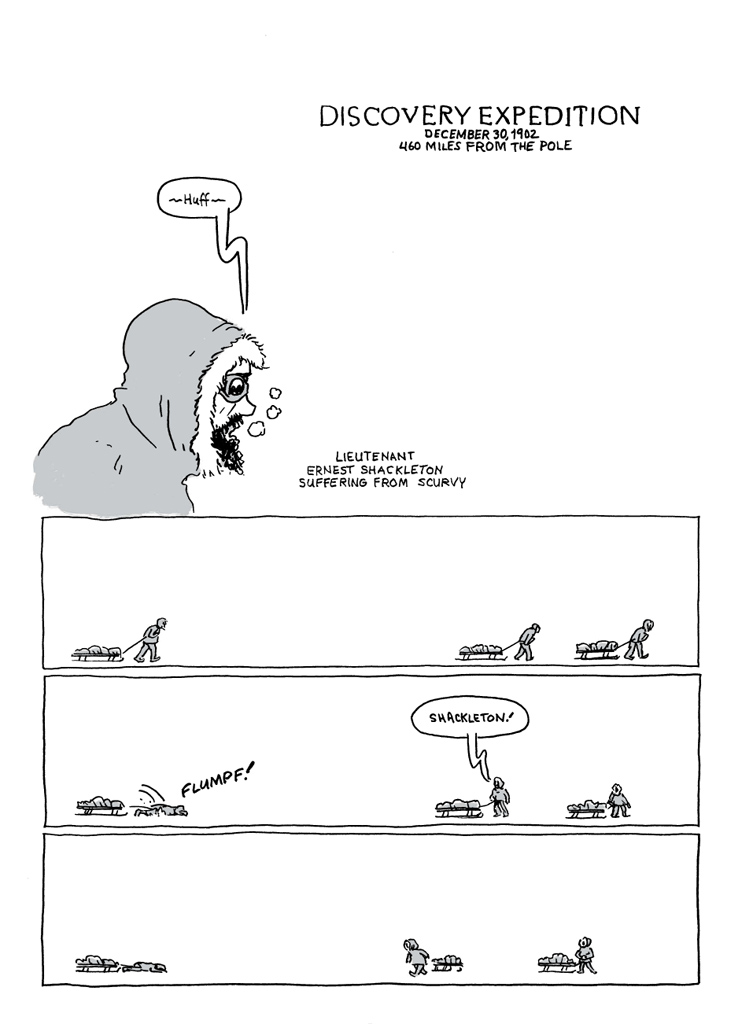 British Antarctic explorer Ernest Shackleton accompanied Robert Scott on his first three year expedition to locate the South Pole starting in 1901, but had to return home ill. He led his own party in 1907, this time having to turn back less than a hundred miles from his goal, and while Norwegian Roald Amundsen’s team reached the South Pole, Captain Scott’s second expedition also succeeded, but all members perished in the extreme conditions shortly after. This didn’t dampen the ambition of the by then knighted Sir Ernest Shackleton to become the first man to walk across Antarctica. Bid farewell by the King, he set off again in 1914 on a ship crewed by 26 other men, several of them scientific specialists, and 34 dogs. This is the terrible journey Nick Bertozzi follows.

He takes a very sardonic approach. Shackleton is portrayed as the grim and single minded person he surely was, and levity plays a large part in distracting from the endurance of conditions that are unimaginable from the armchair. Bertozzi emphasises distance throughout the book, frequently noting miles still to go, including little diagrams, and for the most part picturing humans dwarfed by their surroundings. Although seeming sketchy, there’s a great precision to the art, and unless deliberately so as on the cover, Bertozzi’s cast never seem posed.

He’s also good at conveying procedure. It was expected that ships would become stuck in the ice, but when opportunities arose, freeing the boat involved the backbreaking work of chipping away at ice and physically pulling out great chunks in order to clear the path. This was a torturously slow process, and a decision was eventually taken that everyone spent the entire winter on board ship in the hope that the ice would clear enough to sail the final sixty miles to the Antarctic shore. By the midway point, Bertozzi’s already ratcheted up the tension high as the crew prepare for what could happen, and raises it via the veterans of previous Antarctic trips recounting their horror stories. Relating the details would spoil the read, but one significant element deserves highlighting. Due to widely seen nature footage of penguins waddling around ice floes, there’s a tendency to think of Antarctica and the surrounding ice covered islands as relatively flat. They’re not. When Shackleton and his crew talked of walking, they already knew this involved a good deal of mountaineering along the way.

Shackleton’s journey in short was a case of the worst case scenario occurring again and again, and of unimaginable bravery and endurance in exceptional circumstances. And it was no brief stopover. Once in the vicinity of the Antarctic Shackleton and his crew remained there for over two years. In addition to his other practical qualities, Shackleton was a man who prepared down to the fine detail, and his stay puts into perspective the dusting of snow during which Britain grinds to a halt every five years or so.

Turning the pages time and again prompts the thought of how we’d cope personally under the circumstances Bertozzi relates. The honest will know. From comments made about Shackleton before he began the 1914 voyage it’s apparent that the distressing tendency to value only complete success isn’t just a modern day blindspot. Achievement takes many forms and Shackleton’s achievement was unworldly. Read all about it, and investigate further.