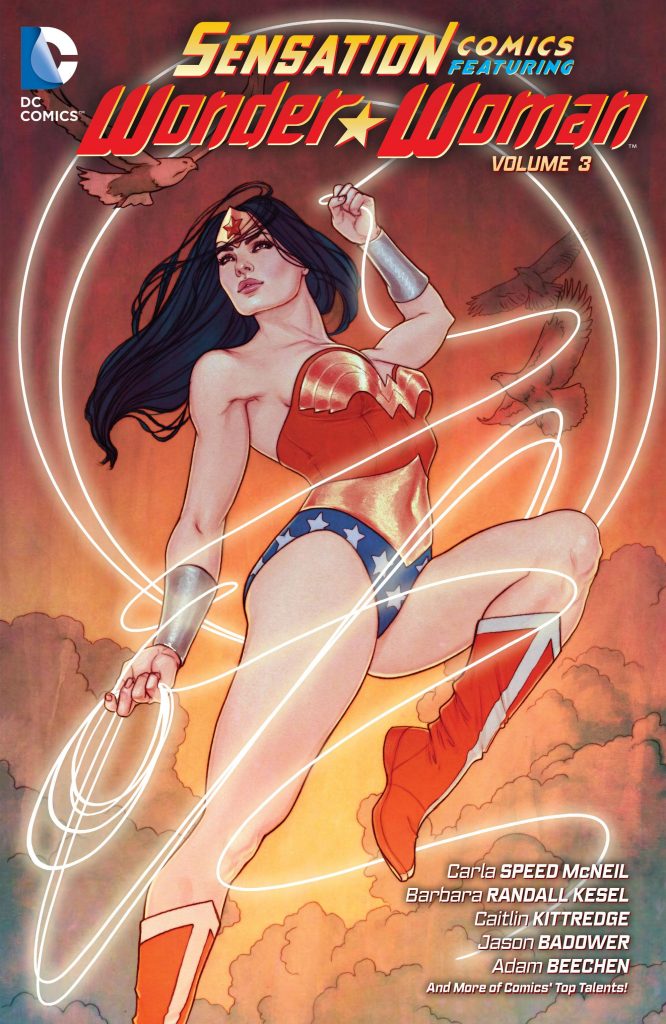 This final anthology selection of Wonder Woman strips by assorted creators originally prepared for online publication sees a welcome return to the variety of volume one, in which the creators recognise the assorted aspects to Wonder Woman’s personality. Volume two was largely restricted to the straight superhero or light comedy, but here we also have the diplomat, the inspiration for athletes, the test subject of the Gods, and others. This is accompanied by a far broader range of topics overall. Wonder Woman is twice the negotiator between two hostile forces, Karen Traviss’ version throwing in depressing real world comments about Western commercial exploitation. We have discussion of the wisdom of domesticating a lion, child trafficking, and ecology, all without short changing those who prefer more traditional superhero exploits, as Batman, Batgirl and Superman appear. It’s a collection to match the first volume for variety, quality and pure fun readability.

Where this volume differs from the previous Sensation Comics is by running far longer stories. Thirty pages isn’t unusual, although when a story doesn’t hit the spot it can be a fair drag to the next. Most contriubutions contain worthwhile ideas even if the execution isn’t all that you’d want. Derek Fridolfs presents the interesting idea of tying in Poison Ivy’s ecological beliefs with the Amazon reverence for Gaia, but the resulting story is ordinary. The strangest is written by Barbara Randall Kesel who begins with a seriously snotty and imperious Wonder Woman, and then segues into an interminable battle with Superwoman. The saving grace is Irene Koh, Emma Vicielli and Laura Braga each illustrating a segment.

The standard of art is extremely high, the best of the three Sensation Comics collections. In addition to Andres Guinaldo (sample art left) and José Luis García-López (sample art right) there’s the painted precision of Scott Hampton, the almost Disneyesque cartooning of Chris Gugliotti, and the great superhero pages of Jamal Igle. Jason Badower’s picture referencing sometimes leaves Wonder Woman with a scary smile, but otherwise he has a great sense of page layouts and viewpoints.

Three good examples illustrate the diversity of approach. Trina Robbins sends Wonder Woman on a mercy mission to aid old foe the Cheetah, only to run into corporate sponsored genetic experimentation. Adam Beechen uses a different incarnation of the Cheetah to spotlight the incidental deaths and casualties caused by superhuman battles, and Badower’s story is a charming day in the life piece with Superman accompanying Wonder Woman without overshadowing her. A best story in an anthology title is always going to be subjective, but Caitlin Kittredge ties in two separate strands well, and has the bonus of Hampton’s art.

That several stories mention Wonder Woman’s duties as a United Nations Ambassador appears to indicate part of an arrangement with the United Nations in which a fictional character was appointed such in the real world. At least until widespread disapproval about it trivialising the position was aired. The stories here, however, are respectful and informative, if employing fictional nations to present real world problems.

Any Wonder Woman fan should find a lot to enjoy here. Christmas gift?