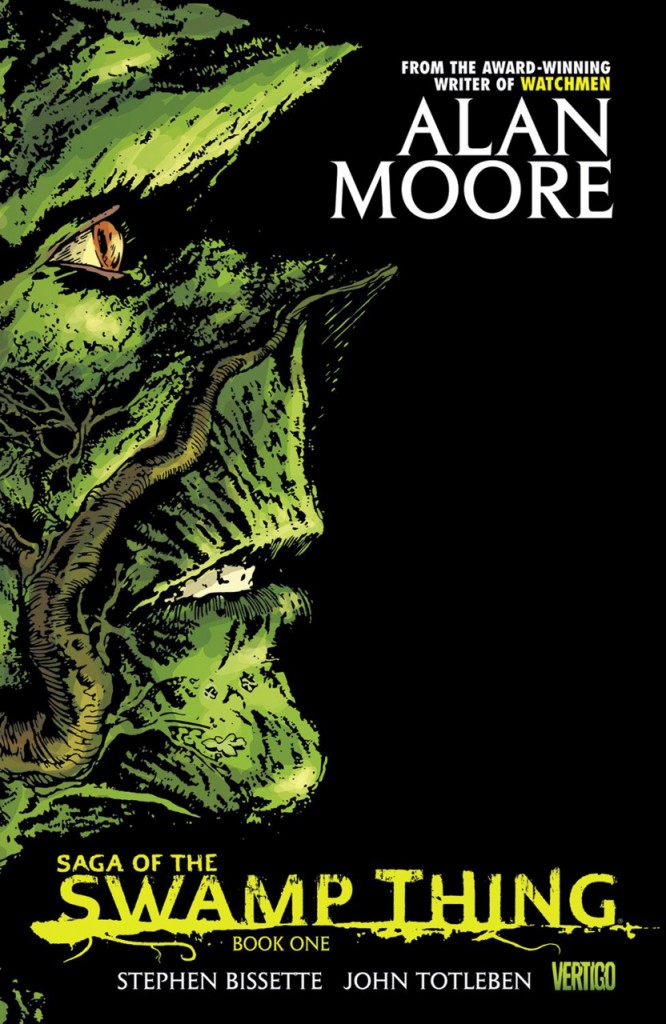 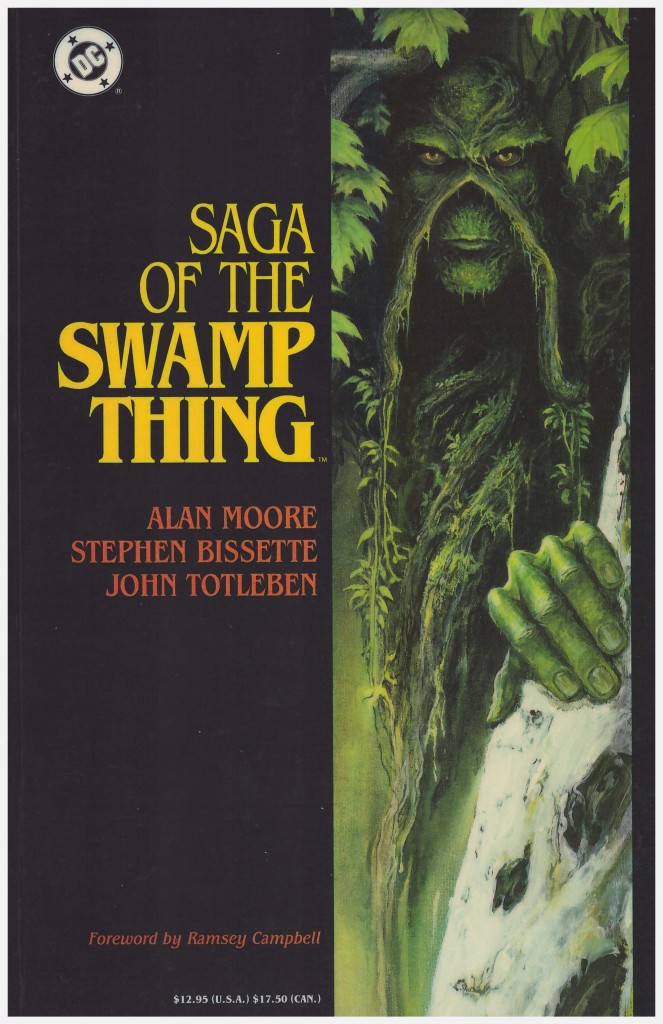 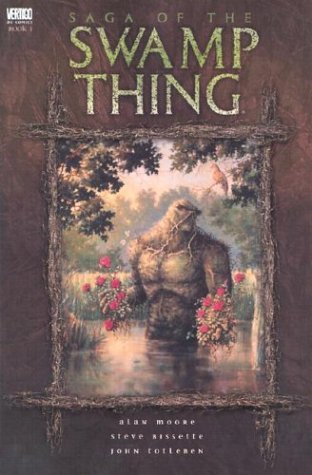 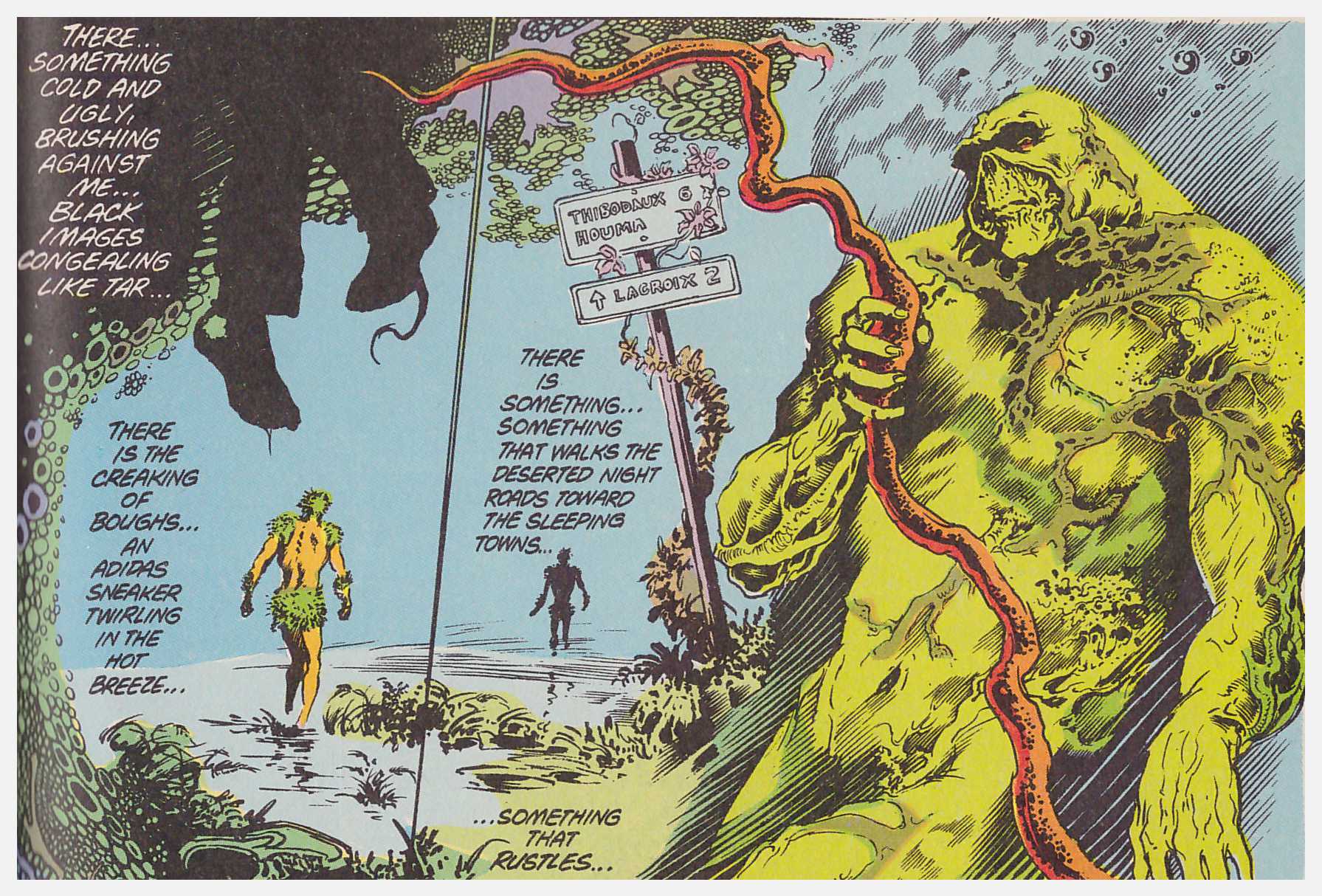 When first published from 1984 Alan Moore’s take on Swamp Thing was remarkable, and such was the thought applied, most of his work on the series still is. For those unfamiliar with the character, as the title suggests, he’s a shambling muck monster, but guided by a human intelligence.

This latest reprint of Moore’s material begins with a tale omitted from previous collections, in which he deftly ties up in a single chapter the myriad strands of what had been an entertaining, if meandering run of stories by TV writer Martin Pasko. He includes a line even more prescient today noting how the phrase “national security” has so many intrusive uses. It’s decoratively illustrated by Dan Day, and also enlightens as to the contribution made by John Totleben, as subsequent artist Steve Bisette’s style is inked in quite similar fashion.

It’s with ‘The Anatomy Lesson’ that Moore transforms Swamp Thing into his own beast. It remains a sustained piece of poetic and compact storytelling. Within twelve pages Moore has transformed Swamp Thing into a fundamentally different character. It’s a stunning redefinition that immediately restored a sense of originality to the series by accentuating the plant elements and removing the self-pity, what Moore memorably referred to as “the Silver Surfer covered in snot”. This redefinition doesn’t just apply to Swamp Thing. As the book continues Moore introduces the Demon’s rhyming identity, and portrays the Justice League as modern-day Gods observing the Earth from their orbiting space station. A previously mundane villain named Jason Woodrue is instrumental in propelling events. Himself a plant hybrid, his methods and motivations are boosted to credibility.

Having established his ethos, Moore removes Swamp Thing from the swamp and begins a run of genre-refreshing horror stories. The first involves the Demon and a fear spirit released via ouija board. It starts beautifully with two character-defining pages introducing Jason Blood also peppered with amusingly oblique references to the future that then play out. A contrast of the pastoral and terrifying ensues. Despite Bissette’s novel, jagged, rendering of the Monkey King, it’s the most traditional of the horror material Moore produces during his run, although satisfying for all that. With the next volume he moves toward meshing modern day elements with horror tropes.

Due to the visionary writing Bissette’s artistic contribution usually receives short shrift, which is disproportionate. Drawing heavily on the EC horror comics of the 1950s, particularly Graham Ingels, Bissette’s monsters slither across the page, they ooze decomposition and scratch at the psyche. It should be noted that the credits are relatively fluid overall, with both Bissette and Totleben contributing to some plots, and Rick Veitch supplying art not noted in the original comic publications.

In addition to earlier colour volumes, in the UK Titan Books issued black and white collections in the 1980s. These are marred by poor printing, but when the clarity emerges it provides an interesting insight into the artistic process, and there’s a case to be made for the horror aspects being even more disturbing in monochrome.