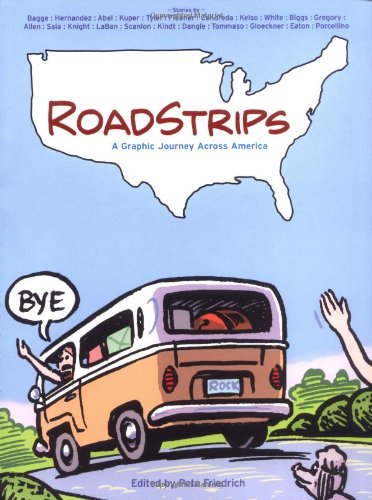 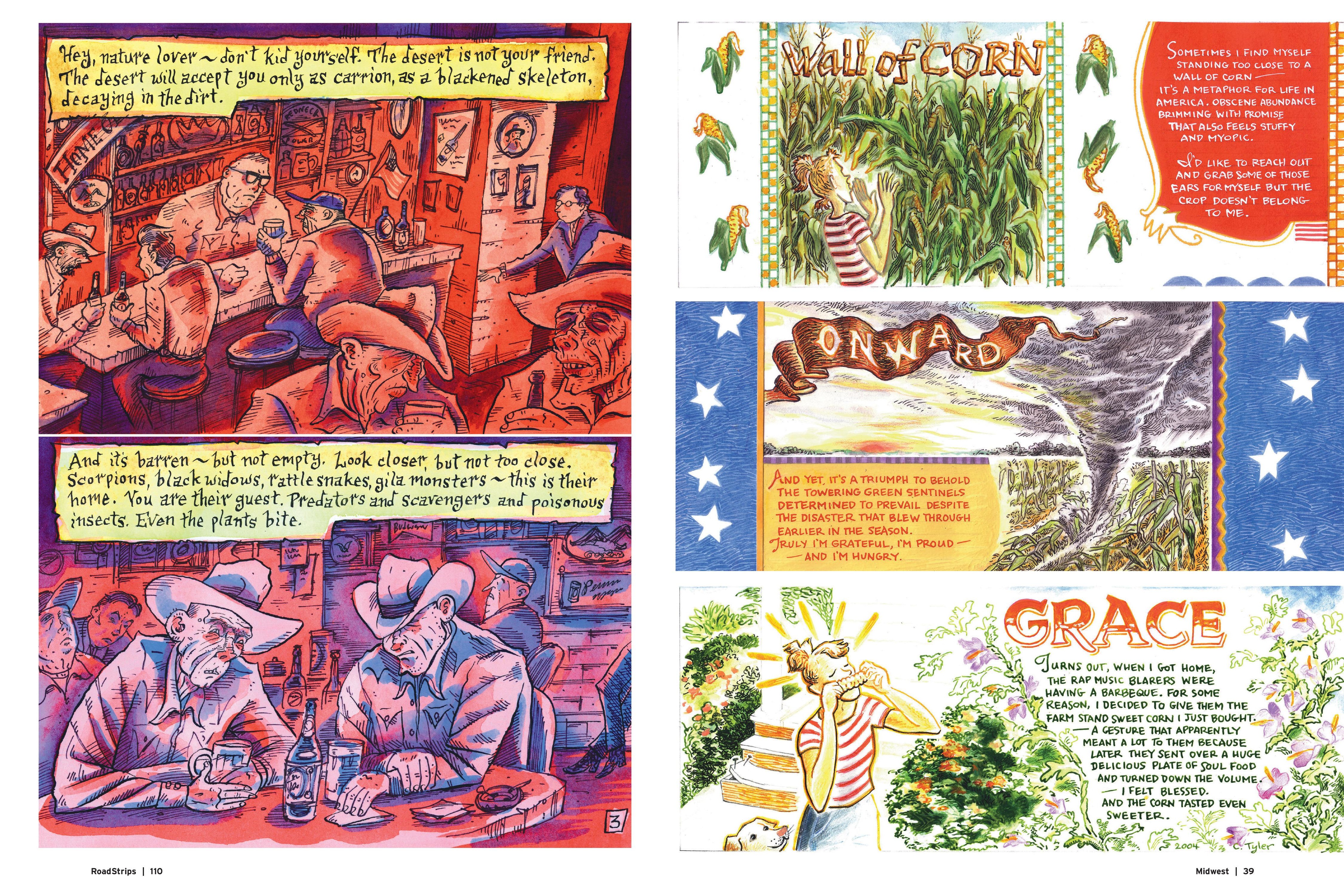 A phenomenal creative line-up freezes Roadstrips in time, the original 2005 book publication presenting a veritable who’s who of the alternative comics scene just before the explosion of web strips. Editor Pete Friedrich’s introduction explains the premise, that although seen as a homogeneous mass, the USA is actually a culturally diverse nation, and he’s therefore split the contributions into five broad areas. Experiences are collected under chapters classified as East Coast, Midwest, Pacific Northwest, The South, and West Coast, and how successful Roadstrips will be for you depends on how far you buy into the premise.

It’s really forced. Friedrich gathered the Empire State Building of talent, and their autobiographical reminisces are entertaining and sometimes enlightening, but very few actually comment on their specific area beyond microcosms. Megan Kelso’s reflections on the Green River killer and Terry LaBan’s searching for a faith identity are examples. It’s only Peter Bagge comparing Seattle to New York and Peter Kuper’s love letter to New York that entirely fit the remit, and look to Mary Fleener for several entertaining pages on Canada. There are connecting themes. Both Roberta Gregory and Gilbert Hernandez comment on the perceptions of Mexican folk in California, but overall it’s as if Friedrich solicited the contributions then tried to fit them around his thesis. Doug Allen’s cover and the title also give a false impression to anyone just picking the collection up without any advance knowledge. Few actual road trips feature, Brian Biggs, Richard Sala (sample art left) and possibly Matt Kindt being exceptions. Via a cross-country range and observations, though, it’s Gregory’s dense strip that best fits the theme overall.

Forget about the theme, though, and there’s a broad collection of styles, experiences and some real revelations. Sala’s career has been based on archaic horror clashing with the absurd, and applying the same sensibilities to autobiographical experiences of the Arizona desert makes for an atmospheric read. Jeremy Eaton and Carol Tyler’s strips both consider the USA as a whole, but each has an inventive storytelling method, Tyler (sample art right) presenting her panels as if labels from cans, and Eaton delivering his thoughts as an extended 19th century newspaper strip pastiche.

Several cartoonists (Lloyd Dangle, Gregory, Kindt) include European experiences or fantasies, and others might possibly offend when presenting their view of how hateful some Americans can be. Rich Tommaso’s thoughtful reflection and conflicted consideration of the USA as a nation after the events of 9/11 condemns a country that’s ostensibly open and welcoming, yet where most remain either blind or wilfully ignore the faults.

Keep an open mind with regard to Roadstrips and there’s much of value, but expect the content to fit the remit and you’ll be disappointed.