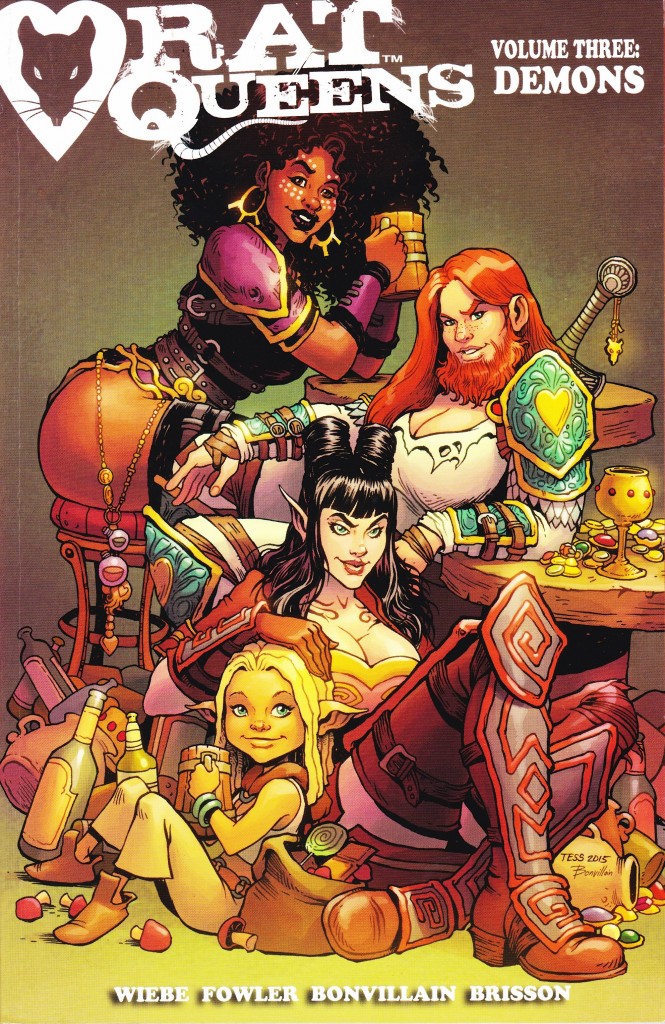 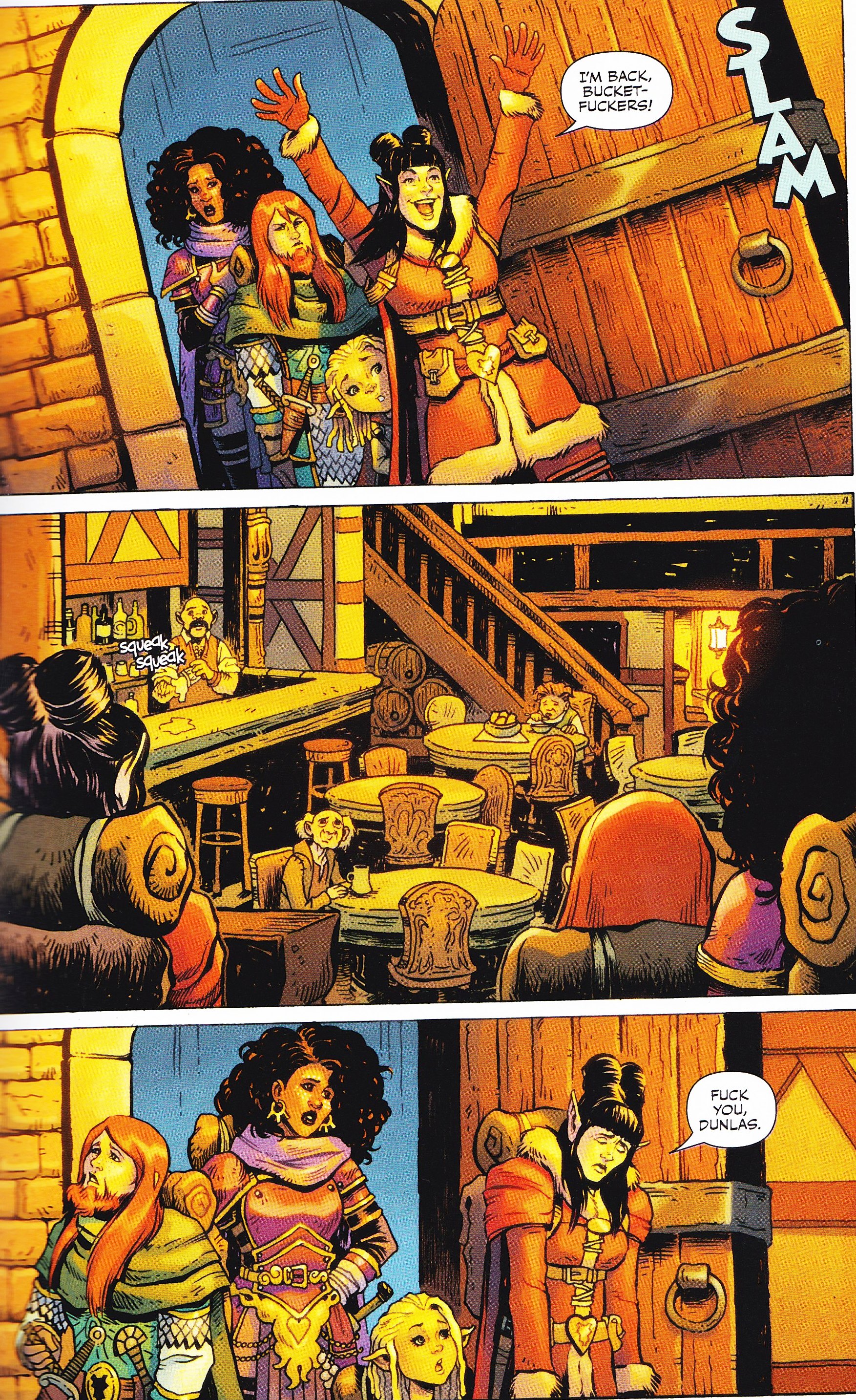 Previously the feisty all-female adventurers/mercenaries the Rat Queens managed to snatch back victory from the jaws of defeat and a world devouring deity, their home town of Palisade safe for the time being. Then Hannah received a call from her mother urging her to save her father from serious danger. It was an interesting cliff-hanger to The Far Reaching Tentacles, and Demons charts the Queens’ adventures to and in the Mage city of Dunlas in an effort to help Hannah find her dad and still have fun. Except trouble is never very far away anywhere these young ladies go. There’s a serious side to the fun-loving Betty, best forgotten when Dee runs into a relative while searching for answers on her deity in the University Library. She  inadvertently learns the reason for Hannah’s departure from Mage University and reveas dark secrets that will change everything.

Rat Queens is Kurtis Wiebe’s homage to Dungeons & Dragons™ spliced with 21st century female post-adolescence films and TV shows. We have Violet the Dwarve warrior, Betty the candy/shroom loving Smidgeon thief, Hannah the sarcastic foul-mouthed wizard and Dee the formerly atheistic high priestess of a demon worshipping cult. From the beginning Wiebe made the series stand apart from the crowd with laugh out loud funny dialogue, real world character interactions and believable female leads coupled with some outstanding artwork. In a genre dominated by muscle-bound men and over sexualised women, the series, with its fairly normal looking women, has been a breath of fresh air.

Tess Fowler takes over as permanent artist, having cut her teeth on an earlier short story, Tamra Bonvillain bringing colour to the world. The opening pages are good, Fowler introducing a more cartoon style. Spells sizzle, frustration boils up and faces melt as Fowler captures some detailed emotional responses on her characters faces juxtaposed against simple backgrounds. Her work isn’t as dynamic as previous Queens’ artists Roc Upchurch or Stepjan Sejic, but she  imbues her ladies with increased femininity and improved fashion sense. The rowdiness that often surrounds the Queens is absent, but she brings a sense of maturity, even capturing a previously unseen vulnerability in the usually flinty Hannah. In the good moments Fowler gives the impression that she has taken ownership of these young women, but she’s not as consistent later, more evident when compared to her earlier story, incidentally also collected here.

It would later emerge that things were not well in the Wiebe/Fowler partnership, which might explain the drop in artistic quality. The problems eventually led to Wiebe calling time on the series. Initially Wiebe attempts to build on plot points from previous storylines, particularly Hannnah’s lineage and Betty’s background, the start quite promising. As events conspire to make this an unexpected finale, he tries to tie up some rather glaring loose ends, but it’s slipshod, hurriedly ended and leaves yet more plot holes. Even Wiebe’s usually laugh out loud funny dialogue feels forced with some one-liners as effective as a lead balloon. The result is a disappointing end to what has been a terrific series.

Image and Wiebe rebooted the series in 2016 with a new artist and a more episodic format, though you should definitely read the first two books both collected in the fantastic Rat Queens: Deluxe Edition.