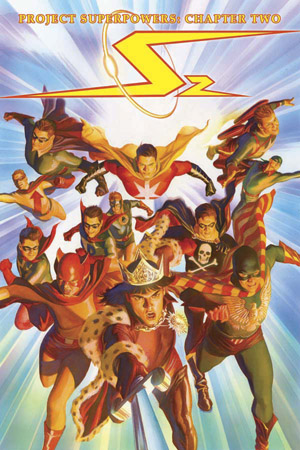 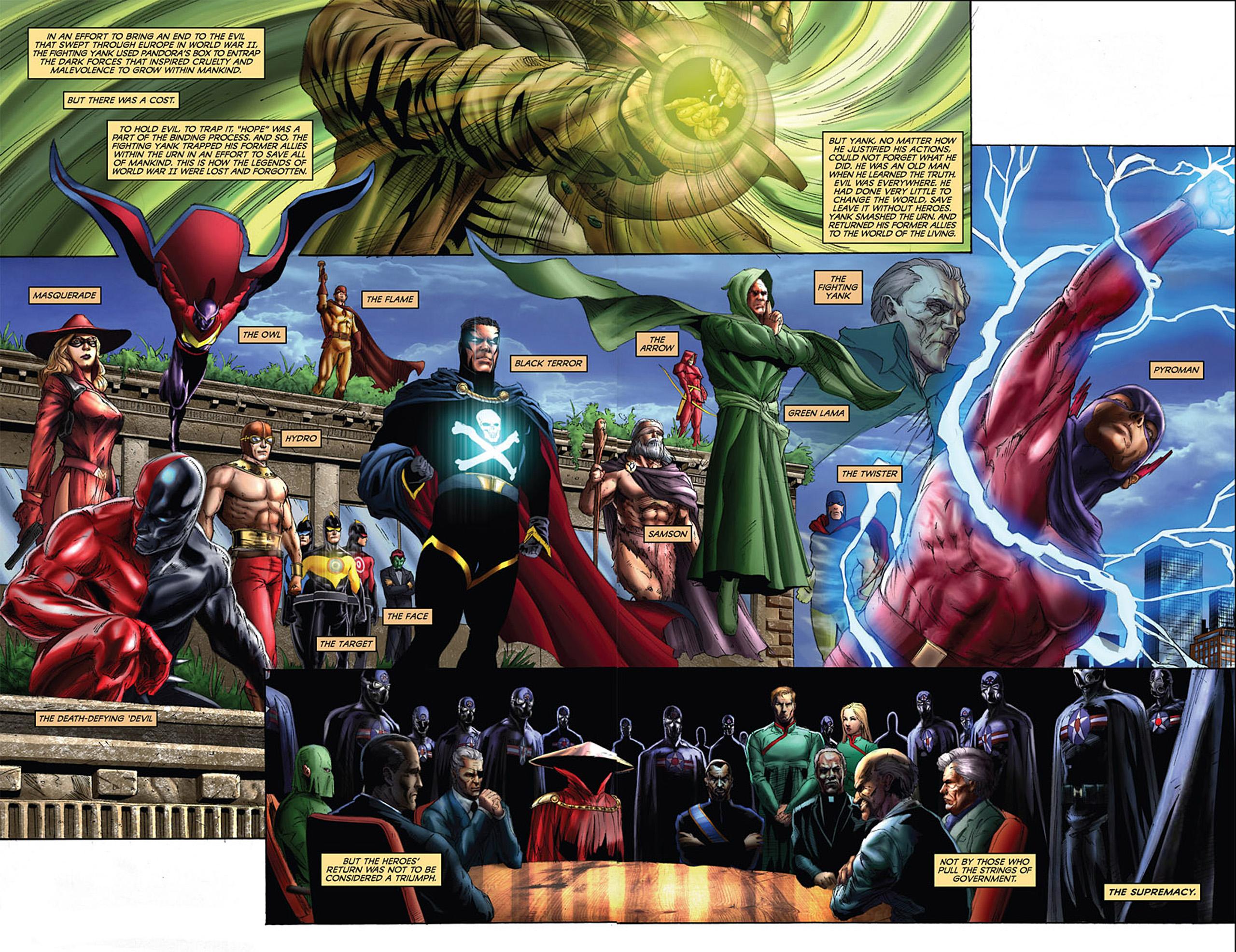 As chronicled in volume one, a significant number of heroes have been released in the 21st century after being trapped since the end of the 1940s in Pandora’s urn. That environment altered several of them, and due to the manipulations of a shadowy organisation called the Supremacy, they have been represented as villains and threats.

Ending volume one, the Supremacy came across as one-dimensional caricatures, and a wise decision on the part of plotters Alex Ross and Jim Krueger is to reveal them early here and sweep them to one side. Also good is two superheroes introduced by Ross and Krueger rather than being revived, Truth and Dare, embodiments of their names. Truth feeds into the mystery of why people have changed during their time trapped, and what they’ve become, something he keeps to himself. That’s one of several additional plots introduced as the pace begins to pick up for Project Superpowers, Ross and Krueger introducing one mystery after another. Occupying a fair amount of the book is the mystery of Captain Future, incredibly powerful, and seemingly returned with the other heroes, but of a very different mindset.

If we can’t have Ross providing anything more than layouts, than Edgar Salazar on the finished art is very welcome. His pages are strong superhero format, and he’s better with facial expressions than Carlos Paul was on the opening volume, so increasing the emotional sympathies. There’s also Doug Klauba’s art detailing the origins and backgrounds of several heroes, one to a chapter. They follow the design introduced by Ross for his Justice League project, of conjoining vertical panels over a two page spread for each summary. They’re extremely useful for such obscure characters, and amusing as Ross and Krueger attempt to present thrown together 1940s whimsy with a straight face.

The mystery of Captain Future is intended as something readers can figure out before the full disclosure, and it throws another interesting plot into the mix. Midway through the book the Green Lama assesses the threats the revived superheroes face, and comes up with four varied concerns, and there’s another he’s unaware of. Better still the faintly ludicrous concept of Pandora’s urn as a maguffin, which at first seemed a homage to the random nature of the 1940s comics in which the cast first appeared, actually has a greater purpose.

A problem remaining from the first volume is the identikit nature of much of the cast. The strongest are Black Terror, the Green Lama and Masquerade, but few of the others have a distinctive voice. It’s not necessarily a solvable problem either, because spending more time building the personalities would slow the plot down again, and the more suitable pace is a reason this volume betters the first. We’re still only at the halfway stage, with the conclusion in Chapter Two Volume Two, or alternatively both are collected in the first Project Superpowers Omnibus.