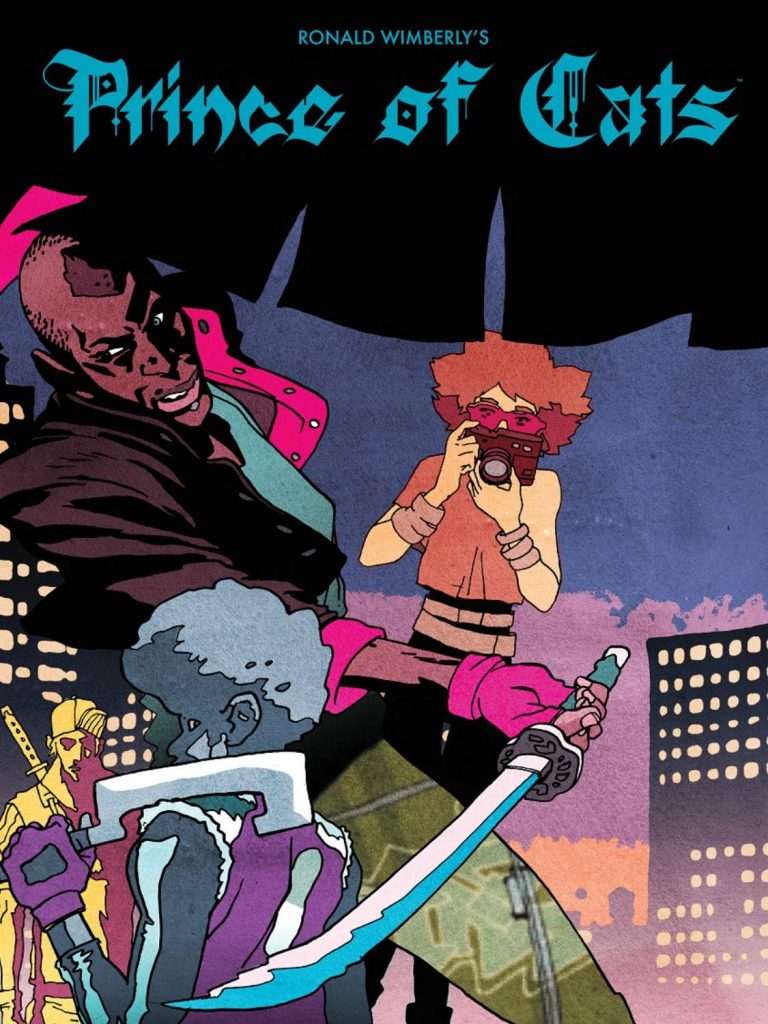 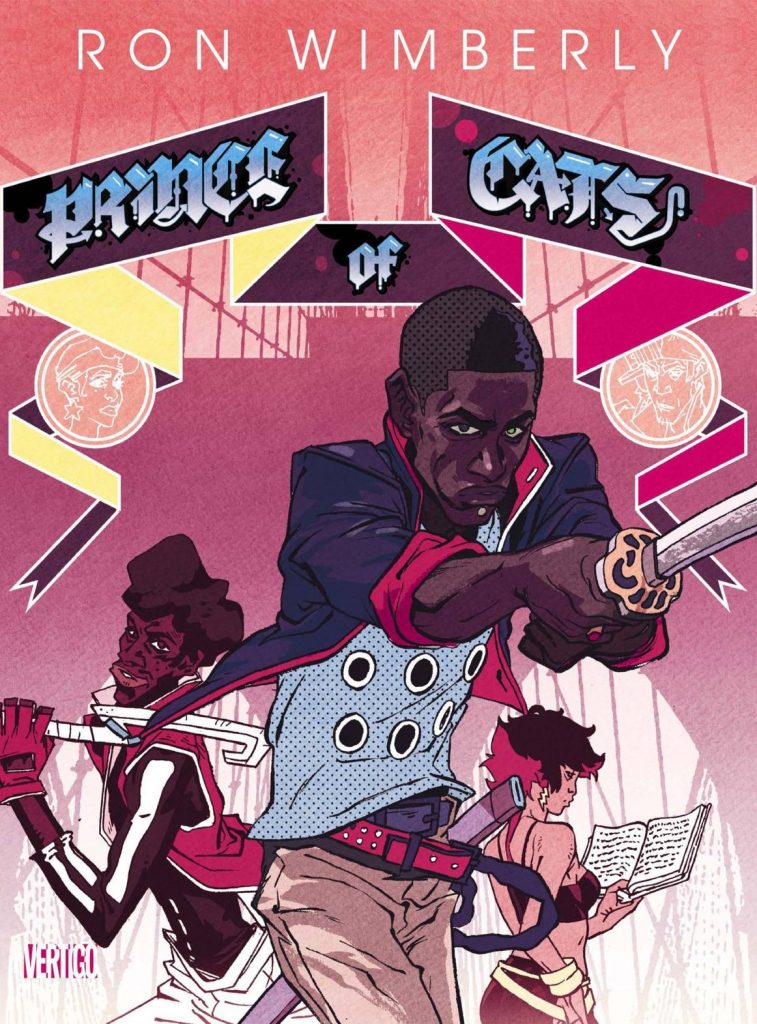 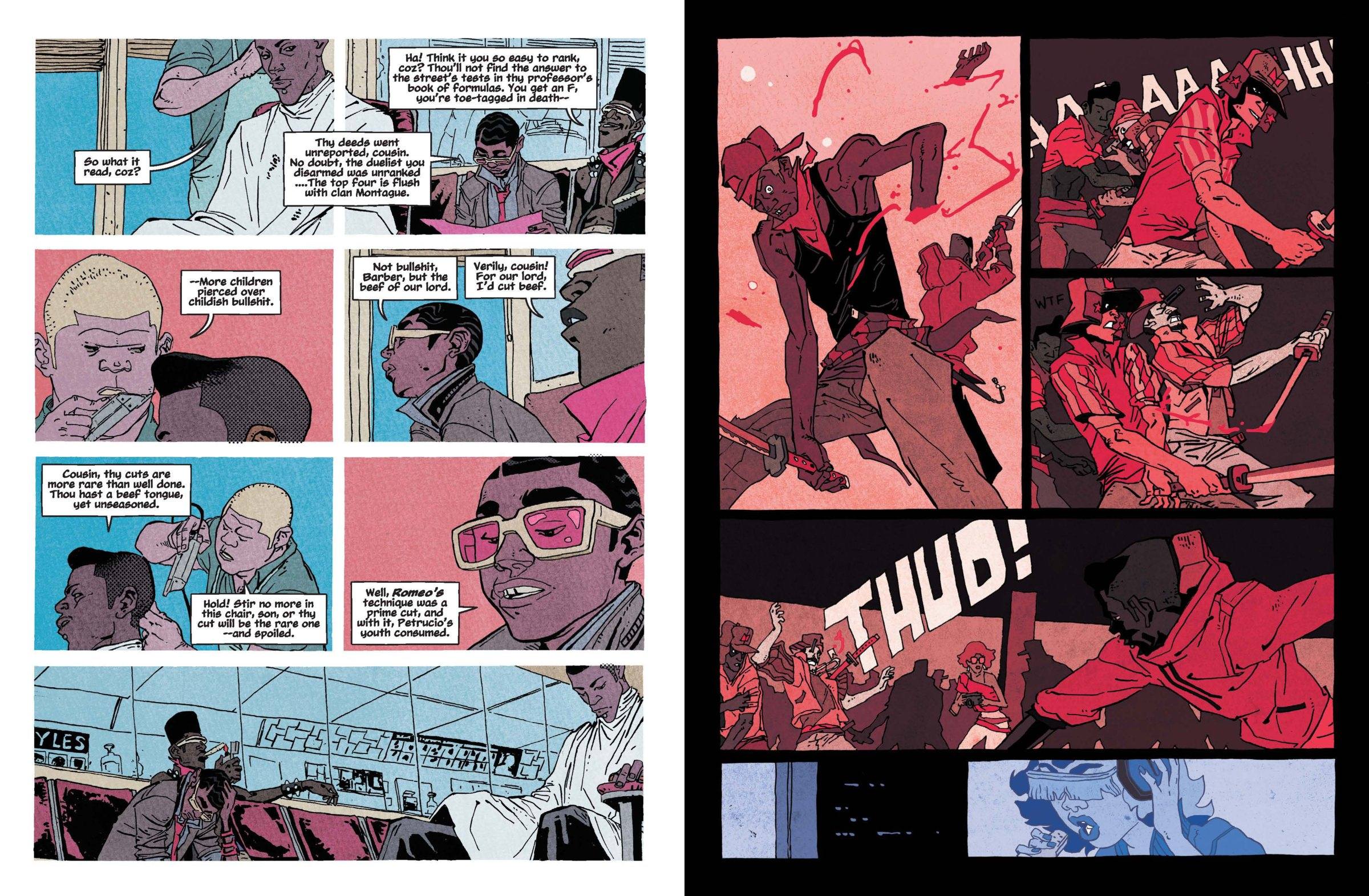 In 1961 West Side Story was a notable success, transferring the Shakespearean feuds of Romeo and Juliet to 1950s New York gang culture. Prince of Cats updates that concept to 1980s New York, including an African American gang. However, Ron Wimberly takes the idea a step further by introducing some Shakespearean quotes, and that from other classical literature, but most dialogue is his own version of Shakespeare’s phrasing. He’s exceptionally good at it, not just throwing in a few thees and thous, but going to the trouble of creating his own neat terms in Shakesperean style, and anyone with just a passing knowledge of Romeo and Juliet may resort to checking the original text. After a while the scenes are such that it’s more obvious the dialogue is Wimberly’s construction, but incredible thought is applied to the creation of new Shakespearean style phrases we can understand and admire. It’s impressive all the way through, drawing neat little allegories, the meat and barber wordplay of the left sample art an example.

It’s not only Shakespearean homage that Wimberly brings to the dialogue as he’s also a fine turn with hip hop lyrics, Juliet delivering a funny, off the cuff obscene rap about DC’s primary superheroes. However, the title gives away that this isn’t a straight transfer of the original plot. The hot-tempered Tybalt, his character likened to a Prince of Cats in the original play, is secondary there, but the primary focus here as Wimberly fills in what he’s up to when he’s offstage in Romeo and Juliet. That applies even more to Rosaline, here rechristened Rosalyn. The play names her only in passing and she’s never actually seen, but here she and Tybalt are the core couple, the other events circling around their perspectives.

In keeping with Wimberly’s inspiration, swords not guns are used throughout, although these are the full-on ninja specials, not 15th century fencing swords from Verona. Blood flows in considerable quantity, Wimberly not glorifying the violence, but showing the consequences of it. He’s an amazing artist, his designs resonate, his people sweat character, and there’s a very cinematic sense of storytelling to scenes of gang members leaping across rooftops. It’s regretful this will be lost as Spike Lee directs a Prince of Cats movie, although strangely for such a strong artist, Wimberly’s cover designs for both the original edition and the 2019 reissue fail to do Prince of Cats justice.

What just prevents this being five star material is that if Wimberly’s clever dialogue and good art is stripped away, the plot plays out predictably after the initial jaw-dropper (for those who know Romeo and Juliet) of Tybalt seeing Rosalyn. Wimberly’s constricted by the events of Shakespeare’s original plot, but that’s not the entire reason for the lack of subsequent surprise.

For anyone put off Shakespeare for life by school study, no amount of praise for Wimberly’s creativity will make any difference, but this is a major graphic novel intelligently conceived and created.