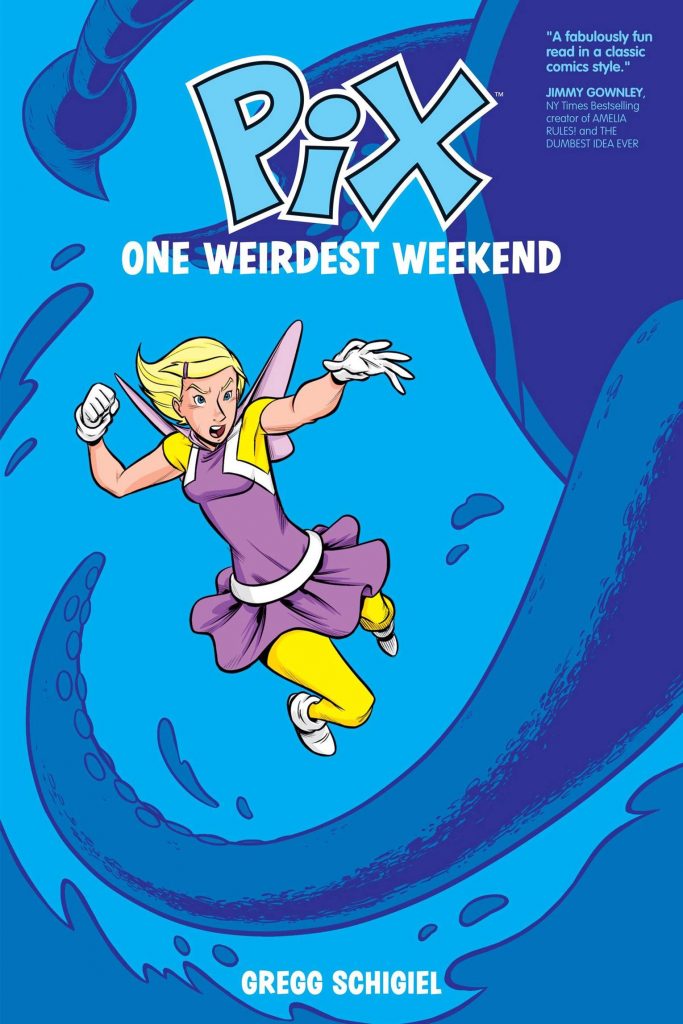 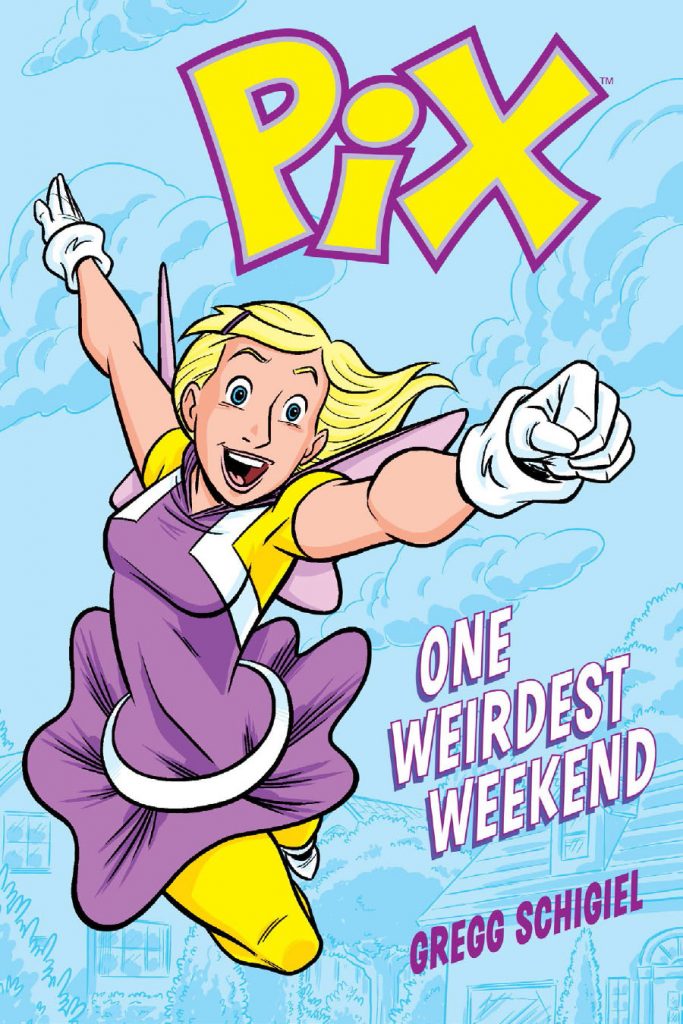 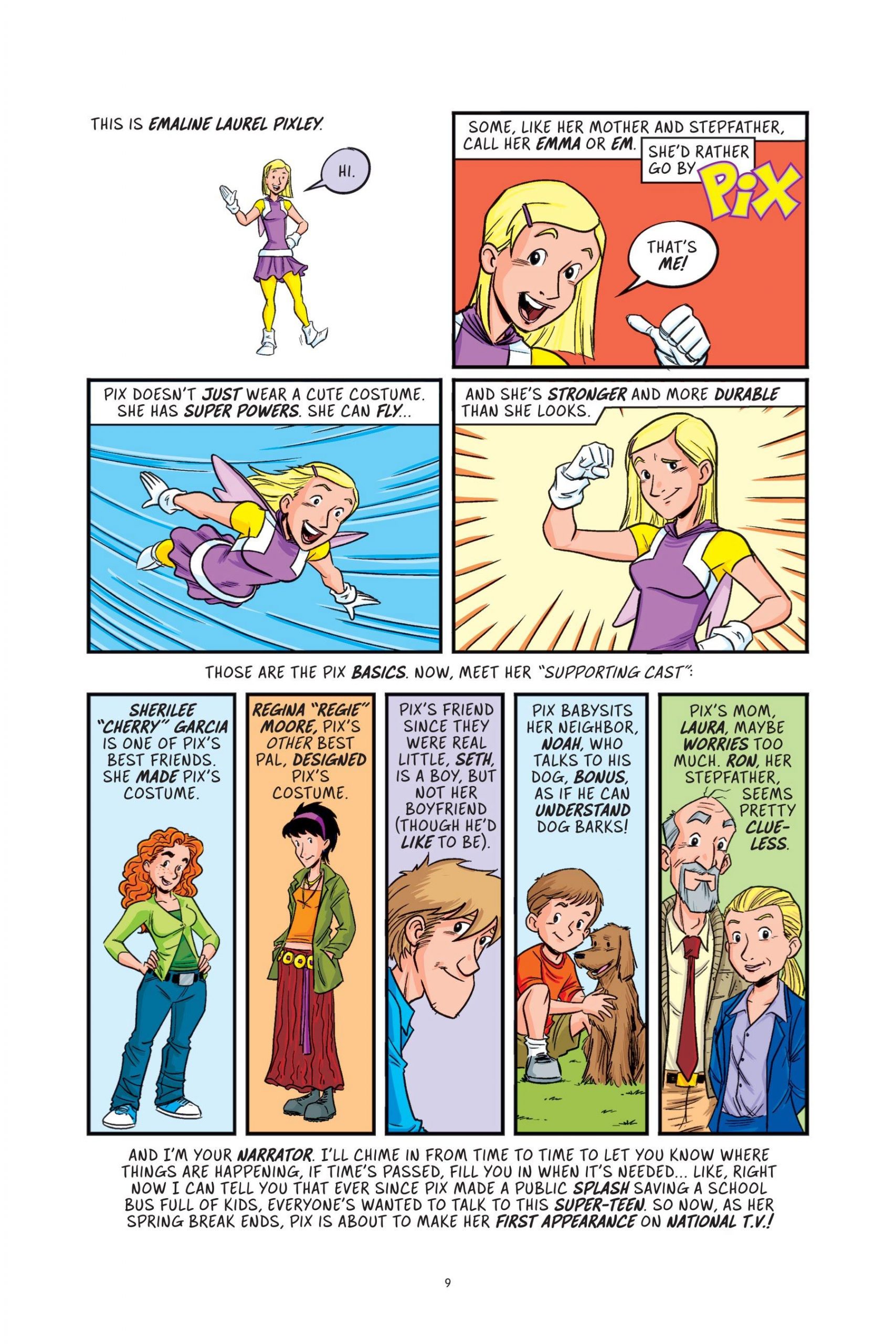 We’re just led into Gregg Schigiel’s introduction of Pix, a cute teenage superhero. There’s no origin story, just the background page provided for the sample art explaining Pix and her world. When asked on a chat show how she became a superhero, Pix claims she’s a fairy princess, and the powers are her generic heritage. It’s on that chat show she meets teen pin-up Luke Michael Felix and if it weren’t enough that she’s suddenly shrinking for no reason, her life becomes even more complicated.

Schigiel’s earlier credits include work on Spongebob Squarepants and X-Babies, both of which cultivated a sense of the absurd that fits nicely into Pix. It ensures what happens is never predictable, only sneaked in just before it occurs, and Pix never knows what she’ll have to deal with next. Perhaps Schigiel’s greatest gift, beyond the tidy and cheerful cartooning, is an ability to keep shifting the ground, yet at the same time keep things simple for the younger audience. Because he introduces the unusual one piece at a time, and pulls most from myths and fairy tales, children can easily latch on to all the changes.

Each chapter takes Pix on a different adventure, none of them traditional superheroing. When that happens, it’s off panel and only referred to later, such as Pix saving a school bus, while some of the strangest items turn out to be relevant a few dozen pages down the line. The way her status as a Princess is confirmed is really nicely handled.

In terms of Pix’s adventures, her friends are largely redundant, but Schigiel uses them to make points about life in general that might not occur to younger readers. It’s okay not to want a boyfriend/girlfriend, you don’t have to do what everyone else does, and sometimes people screw-up. The lesser writer of stories for children tends to hammer this stuff home, yet it’s just noted in passing here as children know when they’re being lectured.

Pix’s world is cheerful and upbeat without becoming saccharine, and has only really just begun to be set up by the end of the book, yet it’s been a full value ride. A number of items have been introduced for future use, so another dose of Pix in Too Super for School is something to look forward to.

The charm extends to the bonus content where Schigiel explains the design process down to the colour scheme of Pix’s outfit, and includes a brief bonus strip. The original edition of One Weirdest Weekend was self-published, but the Image reissue is more easily found. 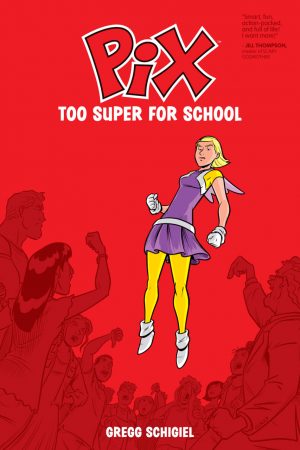