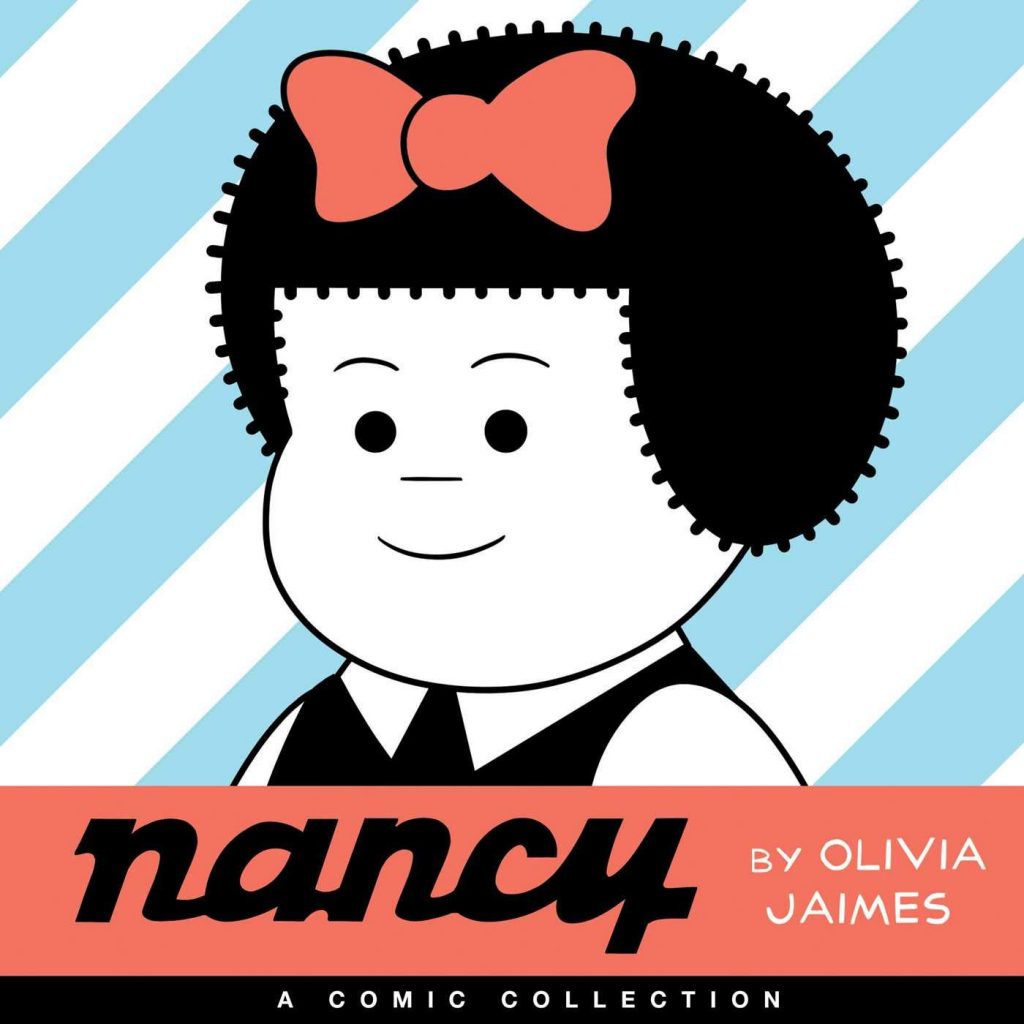 In April 2018, the Nancy newspaper strip introduced a new creator: cartoonist Olivia Jaimes, who was selected because of her previous webcomics to provide a “21st-century female perspective” on Ernie Bushmiller’s famously minimalist and surreal little girl. It was a surprising move for the syndicate to select an iconoclastic young woman instead of one of the many older men who fervently admire Bushmiller’s creation. The results were a 400 percent increase in Nancy readers on GoComics.com in one year and Nancy print sales doubling to 140 newspapers, proving it was a very good decision from editor Shena Wolf. “Olivia James” is a pseudonym for the creator who has chosen to keep her private life and former webcomics career separate from her work on Nancy, to avoid all the internet hassle that comes with being female.

Both admirers and detractors have reacted strongly to Nancy’s contemporary updating with phones, the internet and computers very much at the centre of her existence now, and a definite geekiness added to her problem-solving personality. Interviewed in the Washington Post, Jaimes explains her take on the strip: “I think a lot of my new perspective is: We have smartphones now. There are a bunch of Bushmiller’s Nancy jokes that are basically, ‘Nancy uses something in a way that’s different than intended.’ She’s got, like, a thousand megaphones sitting around her house just waiting to be used creatively in jokes. But now the central nouns in our lives have shrunk. I use my phone for everything, so why wouldn’t Nancy? And that starts to put a damper on certain kinds of jokes, because why would she use a giant church steeple as a megaphone to get Sluggo’s attention when she could just text? At the same time, all the new tech we have means there are angles that just weren’t an option for Ernie Bushmiller. Dude didn’t have the Internet. The Internet is so good for jokes.”

Bushmiller’s detached absurdist style is very difficult to copy, as all the subsequent versions of Nancy have proven, and this new Nancy isn’t as visually sophisticated as the original. The minimal drawing lacks the beautifully controlled, forensically precise brushwork of Bushmiller. However, the tone of his surreal world is well matched by the sharp design and the slightly sarcastic, deadpan yet gleefully self-obsessive little girl presented here.

Nancy: A Comic Collection shows a very worthy updating that approaches classic Nancy more closely than anyone has managed before, bringing her very much into the present. The book features an introduction by editor Sheena Wolf, an afterword by Hilary B. Price, and an interview with Olivia James originally published on Vulture.com. There are also nine ‘fan art’ pictures of Nancy by Jaimes parodying artists from James McNeill Whistler and Johannes Vermeer to Naoko Takeuchi.