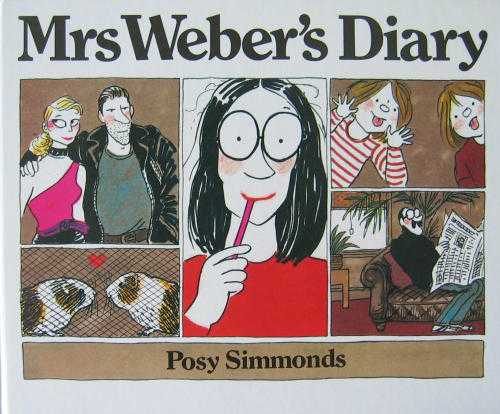 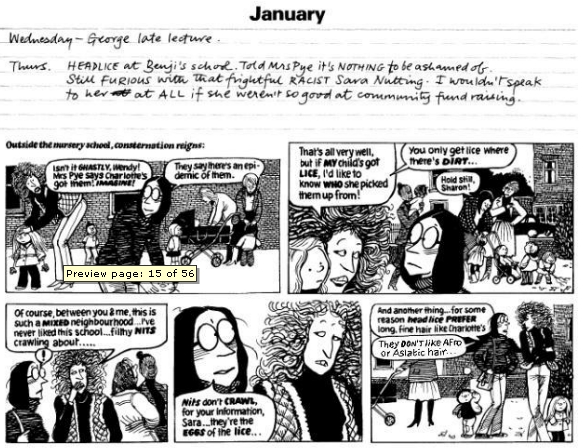 For the first collection of her Posy material creator Posy Simmonds elected to re-work some of her Guardian newspaper material, affixing the strips to diary entries by Wendy Weber offering background and pithy comment. It’s a neat idea, diligently applied replete with corrections, doodles and smudges.

The strip began in 1977, but the examples selected for presentation here aren’t the earliest material. They originate from 1978 onwards, by which time Simmonds had dropped the romance comic parody elements to focus on what would inform her commentary from that point: the foibles of the chattering classes. So, we have Liberal Studies polytechnic lecturer George Weber able to suck the joy out of anything through over-analysis in gloriously phrased semiotic nonsense. Belinda Weber rebels against the values of her parents via unsuitable dress and boyfriends. In a pre-AIDS era advertising executive Stanhope Wright sows his oats where he can with little concern for his wife, and salesman Edmund Heep is oblivious to all attempts at what would later be referred to as political correctness. Wendy Weber sees all and knows all.

In that manner she’s much like Simmonds, whose extraordinary sense of detached and amused observation trickles through the strips, conceiving unexpected solutions for social annoyances such as offensively sexist workmen. Childrens’ parties, dinner parties, the farewell speech, press condescension toward women, the politics of nits, getting back to nature in Cornwall… The list of topics never runs dry, yet Simmonds drags the readers she’s parodying along with her.

The cartooning is splendid, primarily simple and effective, but infinitely expressive, occasionally veering into eccentricities such as Breugel pastiches.

There may be a fear that material poking fun at the foibles of the pre-Thatcher British middle classes might somehow have passed its sell-by date. That’s not the case. The cartooning, the gags and the characterisation all still appeal, and there have been few answers to the social concerns in the intervening years, so they remain relevant. Both hardback and paperback versions are long out of print, but the collection is reprinted along with five other Simmonds books in the 2012 Mrs Weber’s Omnibus.