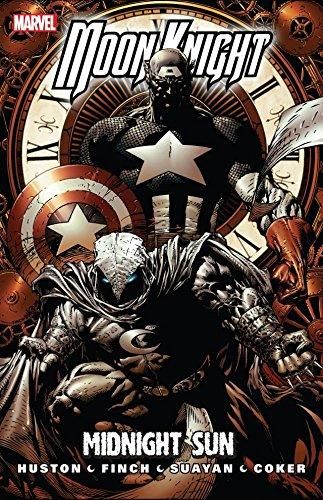 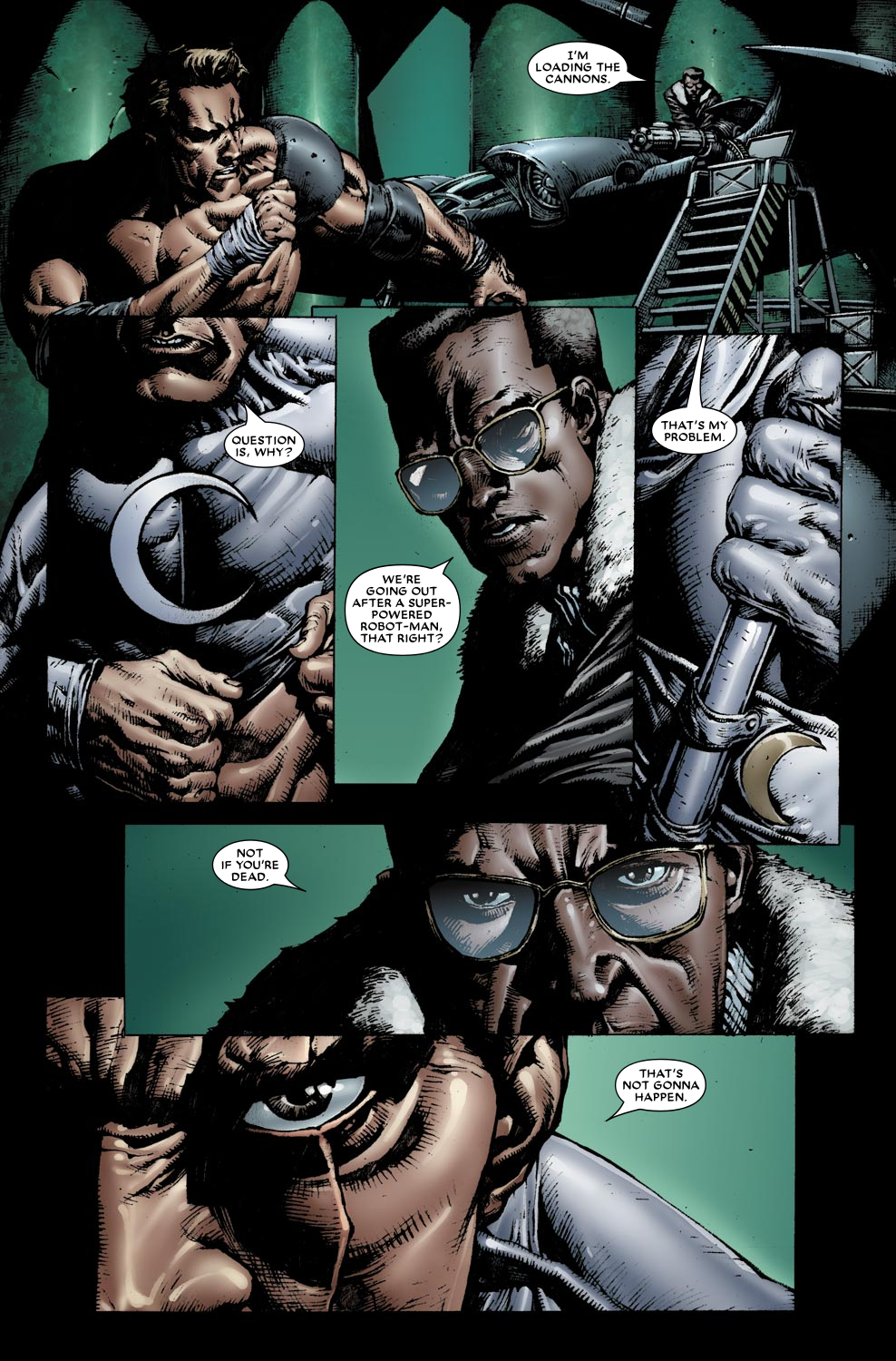 An opening sequence where Spider-Man has to prevent Moon Knight from scraping gashes across an unconscious criminal’s face supplies all the information you need to know about Charlie Huston’s version of Moon Knight. If this thoroughly unpleasant idea appeals, you’ll just love Moon Knight getting into a limo where he has an inner conversation with corrupted god Khonshu manifesting as a man without skin, a sort of even more horrific Red Skull. Just because something’s repellent doesn’t make it bad, but there’s little purpose to much of the nastiness that Hustson, David Finch, then Mico Suayan provide other than an intention to shock, and that’s a one trick pony.

One of Huston’s better ideas is to show the violence superheroes indulge in has consequences, so if Moon Knight has a tough time battering crooks in the early hours it shows on Marc Spector’s face at lunch. Unfortunately, this is one of the few things Finch can’t draw convincingly, and Spector instead looks to have contracted an exotic disease.

Having begun with The Bottom, Huston’s Moon Knight seems to be on track for a redemption arc. Spector is a man seen to be at war with himself, acknowledging poor life choices, yet unable to change who and what he is. When not offending or scarring people Huston has Moon Knight lectured by Captain America and a hard-boiled police detective who’s seen it all, representing both ends of the righteousness scale. Then there are those mistakes from the past, the book title being a pun on one of them. Past and present clash as awkwardly as the torrid emotions in Midnight Sun, and the dialogue strains to be hip and meaningful, but it’s so obviously dialogue, not anything real people would say.

Finch only draws the opening two chapters. Suayan is given a very similar look due to the dark tones applied by colourist Frank D’Armata, but he has a different approach, more likely to move in close on expressions and headshots, but follows Finch’s example when it comes to figures with costumes almost sprayed on rather than worn. He’s not quite as good as Finch overall, and uses a lot of unnecessary lines. Both provide consistently gruesome images, although Finch thankfully spares us the sight of Moon Knight slashing faces.

Events play out against the background of Marvel’s first Civil War, so Tony Stark turns up also, not in costume until the final story. That stands out, not least because it’s drawn in a very different, grittier, style by Tom Coker, using plenty of ziptone (or digital equivalent), and provides an interesting change of pace. The essence deals with Moon Knight’s level of sanity, as defined by a psychiatrist evaluating superheroes due to be registered, but it’s a confused script covering a lot of loose ends that doesn’t gel as well as it might.

Huston continues with God & Country, but with Mike Benson as co-writer.