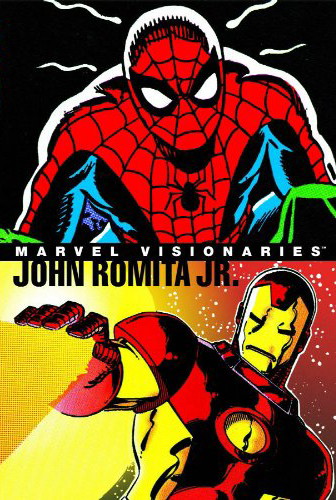 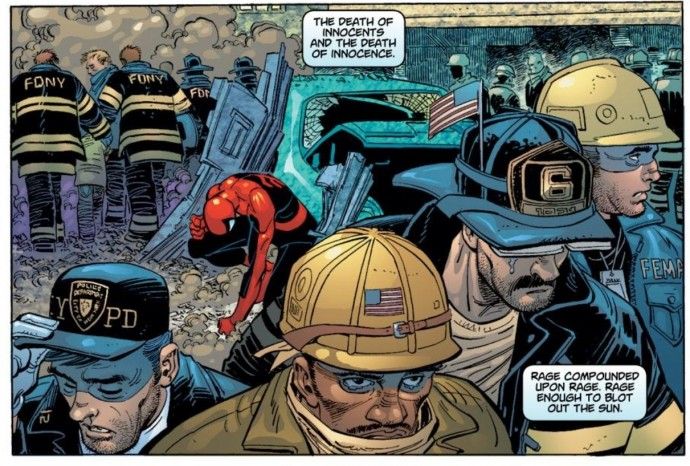 There has been no other Marvel artist whose continuous career with the company spanned over thirty years, and with the exception of Jack Kirby no other artist whose style and approach has progressed throughout. Most comic artists find their style early and stick with it, Romita’s father being a prime example, but as the chronological presentation of this book displays, Romita Jr’s path has been very different. A touching introduction from John Romita Senior places this in perspective.

The opening Spider-Man story shows the young Romita very much influenced by his father’s approach. The talent is there, but it’s unremarkable in every other respect. Check the difference five years makes, though, with his next work on Spider-Man. Roger Stern’s script calls for Spider-Man to prevent the rampage of the Juggernaut, an unstoppable force, which he lacks the strength to do. From the start the layouts are far more imaginative, particularly a Ditkoesque opening sequence, yet the solid transfer of script to art is now in place. There’s never any doubt what’s going on in a Romita Jr story, yet this is combined with an exciting page design, although Jim Mooney’s inking isn’t the best suited.

The progress over the years is remarkable. While the blocky style that’s now associated with Romita Jr can be assumed to be a 21st century phase, and well represented by the post 9/11 issue of Spider-Man, this book presents it as a gradual evolution. He also learns from other artists. The opening two chapters of Daredevil: Man Without Fear are written by Frank Miller, and while Romita’s art is all his own, he’s absorbed the storytelling style Miller used on Daredevil and fed it into his layouts.

As for what the content is like to read, much is now dated, without yet having emerged from the other side of the equation to bear a kitsch charm, largely because Romita Jr made more of an attempt than most of his contemporaries to ensure fashions were modern rather than timeless. Star Brand, intended to be a superhero living on ‘our’ world in 1987, late 1980s Daredevil, Iron Man, and the X-Men all now look dated before one even begins to read. The writing is also subject to the passage of time. A 1984 X-Men comic begins with a heart to heart between Colossus and Kitty Pryde drawn in an emotionally subtle fashion, but the accompanying thought balloons and dialogue haven’t survived well. A later bar brawl with Wolverine, Colossus and Juggernaut works better for the absence of dialogue. Tony Stark’s alcohol problems provided a bold storyline in 1979, but curing them in twenty pages now seems trivialising, and while the concept behind Typhoid Mary’s introduction is strong, the dialogue again diminishes the effect.

The material that stands up best is the Daredevil: Man Without Fear samples. Miller’s terse narrative captions move the story along at a cracking pace, and we’re left wanting more. Also notable for various reasons are two Hulk issues from more recent times, and the 2001 response to the downing of the World Trade Center. Considering how little time Romita Jr must have had to draw the pages of this rapid response issue, it’s remarkable. If only all rushed artists looked this good.

This hardcover is an excellent glimpse at the evolution of a top class artist, but for most of the book it’s the art rather than the reading that’s the attraction.