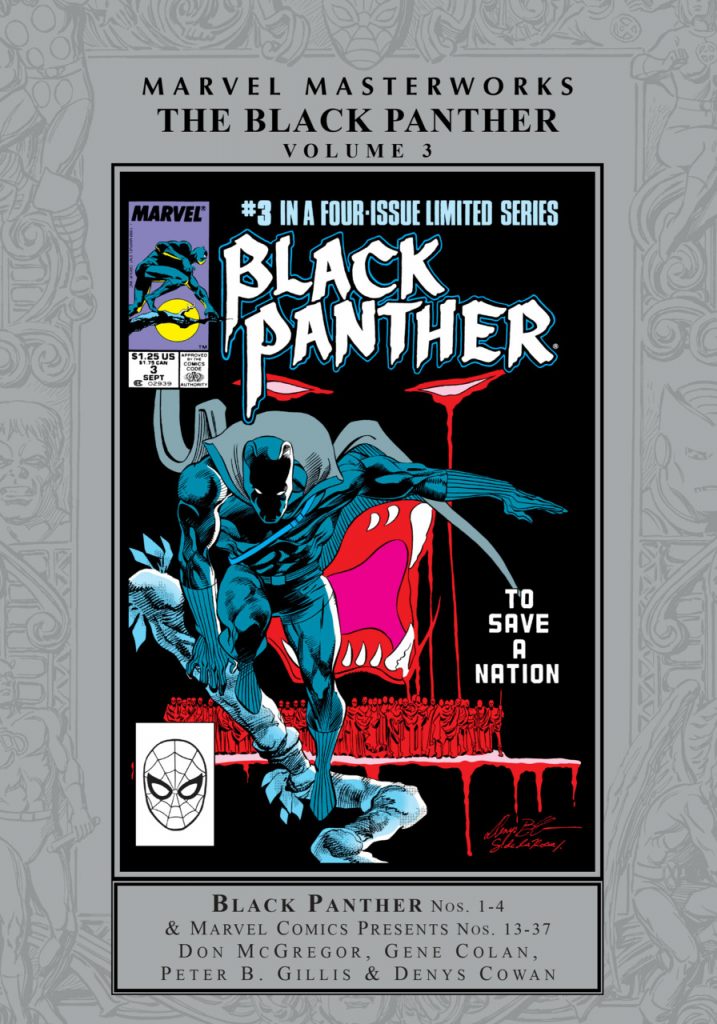 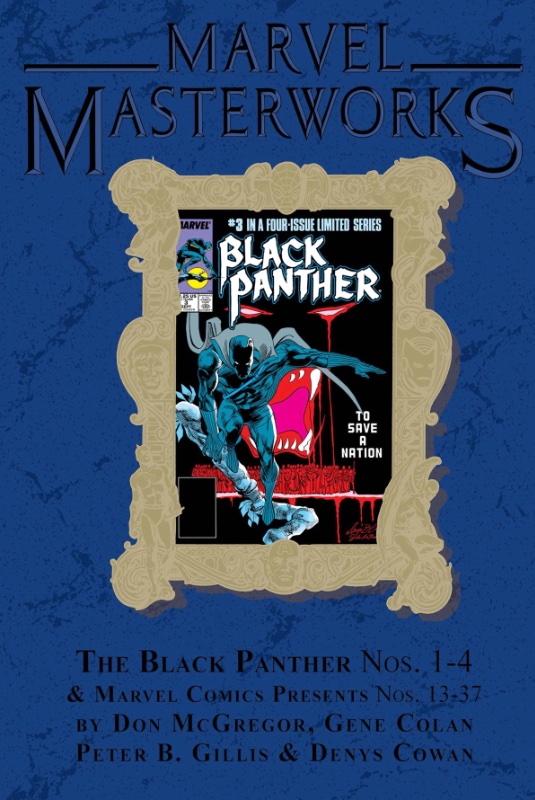 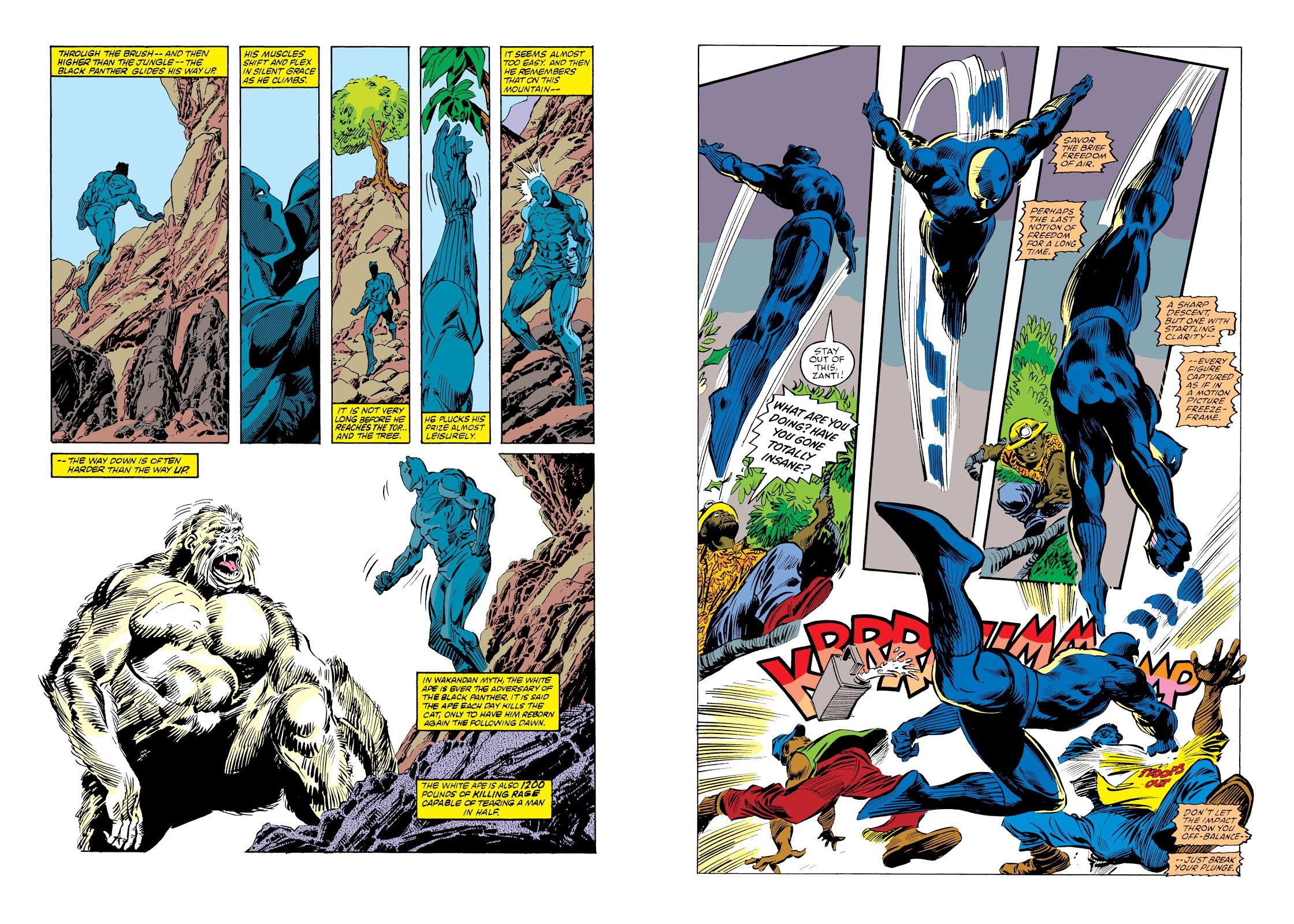 Lauded as the first black superhero in American comics and one of the first to carry his own series, the Black Panther’s popularity and fortunes have waxed and waned since the 1960s when he first attacked the Fantastic Four. Embedded from the start, though, was a sense of political stature, and that’s what Peter Gillis focuses on. His is a deeply-politicised anti-apartheid yarn beginning with Wakanda’s neighbouring state Azania plotting the downfall of the Panther’s technologically advanced society. Equally emphatic and potent is the raw, rough-hewn illustration of Denys Cowan and Sam De La Rosa.

As global condemnation of Azania’s apartheid regime mounts, T’Challa learns that the Panther God has withdrawn its blessing: consecrating and empowering as a new Black Panther a priest imprisoned in Azania. When this savage avatar begins inflicting bloody retribution on the ruling class, the Azanians blame Wakanda. Deprived of his feline blessings and herding war-hungry dissidents in his own nation, T’Challa faces a crisis of confidence and faith, before having to face Azania’s own super-agents: The Supremacists.

Jack Kirby created the Black Panther, but it was lyrical intellectual Don McGregor’s writing in the 1970s that embedded him as a fan favourite. In 1989 he was lured back to spin a shocking tale of contemporary intolerance and the end-days of Apartheid, joined by a deeply sympatico, semi-regular artistic collaborator. Gene Colan was one the industry’s earliest exponents of strong black characters and his credentials in crafting human-scaled tales of adventure, horror and empathetic emotional drama were second to none.

Serialised in in 25 fortnightly chapters, ‘Panther’s Quest’ examines not only the condition of racial inequality, but also turns a damning eye on sexual oppression. There’s no hiding behind a fictional alias as the Panther infiltrates neighbouring totalitarian South Africa where a white minority oppresses the millions of blacks living there. He’s searching for his stepmother Ramonda.

McGregor has always had a fascination with the real effects and consequences of violence, and this tale contains shocking moments that will make many readers wince. Vicious brute Elmer Gore graphically torturing the Panther with barbed wire is one such sequence, and McGregor doesn’t shy away from totally unpalatable racist villains as the evils accumulate. White supremacists feature, mercenaries attack a township firing tear gas, uncaring of the small children they are endangering, and the petrol and tyre form of punishment called necklacing turns the stomach.

Amid the atrocities, McGregor and Colan provide a fast-paced thriller, where the Panther is under the cosh, real world locations constantly change, and a strong sympathetic supporting cast sometime pay the price for doing the right thing.

One of the most thought-provoking mainstream comics tales ever created is also an explosive rocket ride of thrills, spills, chills, delayed gratification, and potent commentary. These long-lost classics confirm the Black Panther as one of the most complex and versatile characters in comics and simply scream “Read me! Read me!” You should, and you must.