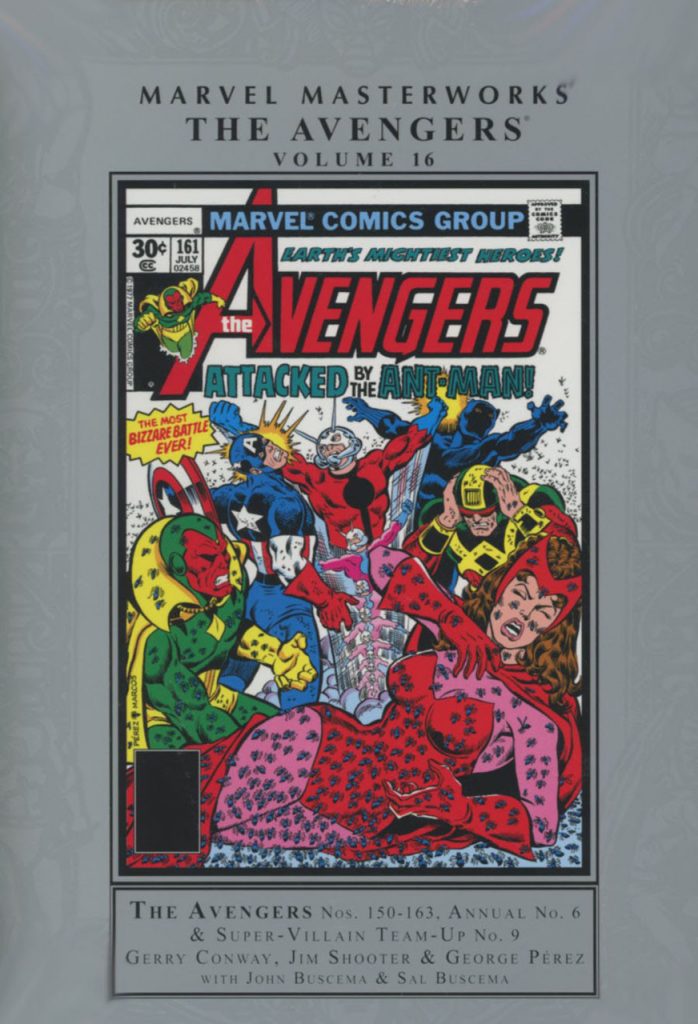 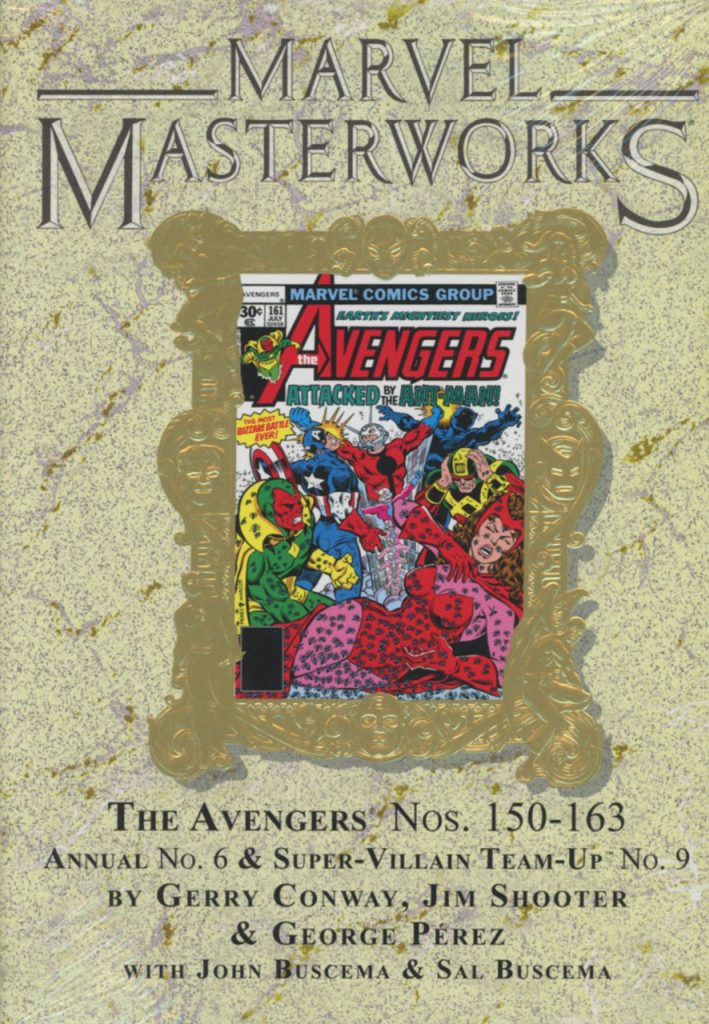 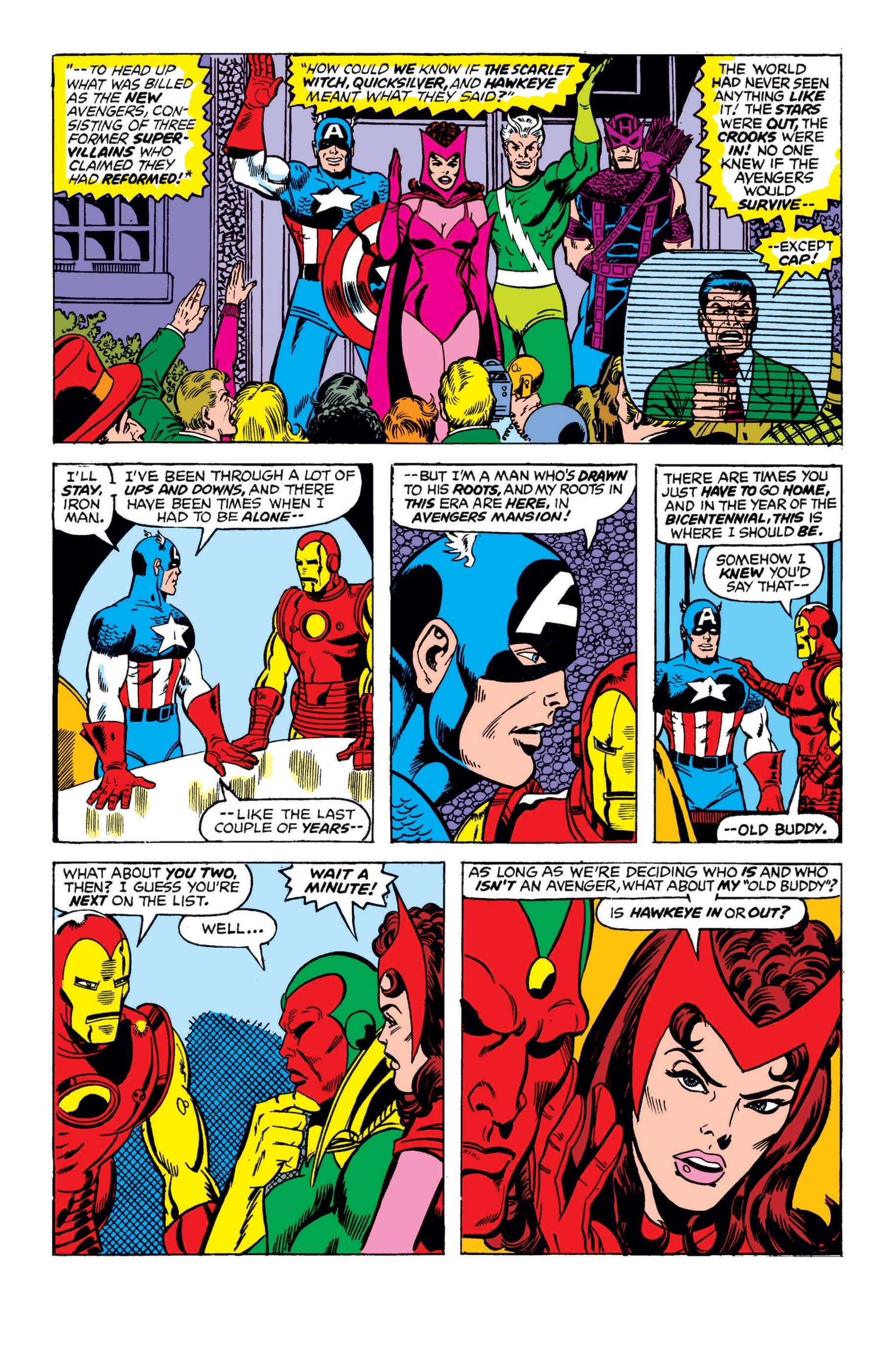 This volume of Avengers reprints spanning 1976-1977 is extremely hard going in places, with an enormous saggy middle section that not even the art of George Pérez (sample page) can rescue. The office politics of the time causing this are addressed in Gerry Conway’s introduction, and it resulted in an ultimately unsatisfying selection of fill-ins and crossovers with inspiration at a premium. However, it starts well, and the penultimate work is still excellent, so let’s focus on those.

Having completed an ambitious seven part tale (see Avengers Masterworks 15), Steve Englehart turned his attention to reconfiguring the Avengers membership, establishing a format occasionally used to good effect ever since. As the Avengers discuss who’ll remain with the team, news programmes speculate and run through past changes, and Pérez continues his impressive artistic development. What prevents this being first rate is that someone failed to meet their deadline and the story’s clumsily interrupted by a reprint of a Stan Lee and Don Heck story from a decade earlier. Marvel’s policy with Masterworks is to be faithful to the original running order, and so repeating the mistakes of the past. Would they be better off excising reprint material, and shunting fill-ins to the rear of the collection? Readers are advised to skip the reprint and move straight to the concluding chapter, and its shock ending reviving a dead character, then relatively unusual.

That was Englehart’s swansong, and Gerry Conway picks up the plot threads for a generally uninspiring few episodes, something he acknowledges in his introduction. He introduces the distinctly odd villainous teaming of the Living Laser and Nuklo, then moves to an attack from Attuma and his undersea forces and ends with the Avengers meeting Doctor Doom. This was all previously reprinted in The Private War of Doctor Doom, and reads no better here despite Conway’s admission. Conway’s finale picks up on events of the Avengers/Defenders War, and is scuppered by the very basic art of Don Heck, who never enjoyed illustrating superheroes.

Jim Shooter’s first solo work on the Avengers has him feeling his way with a new villain, Graviton, and some over-baked emotional moments. His continuation of those themes is far better. The final story teaming the Avengers with the Champions (and originally constructed as an emergency fill-in for either title) is also mediocre, with Shooter basic and the art by George Tuska, a man who employed ‘bare minimum’ as his watchwords.

Thankfully there are several good issues toward the end of this book, all by the team of Shooter and Pérez. Wonder Man rapidly becomes the core character, and Shooter explores his complicated origin. Ultron claimed to have created the Vision using the deceased Wonder Man’s brain patterns, and the Grim Reaper is Wonder Man’s brother. Shooter uses them both well in some emotional tangles over three compelling episodes also featuring other interesting ideas. Shooter hasn’t quite nailed his writing style for the Avengers, and there are some melodramatic thought balloons, but his plots work and drag the reader along, and have the benefit of Pérez thoroughly enjoying himself. These stories don’t compensate for the mediocrity of the remainder, and are better sampled in The Bride of Ultron collection, where they’re accompanied by a fun collaboration between Shooter and John Byrne found in Avengers Masterworks 17. Alternatively the content is available in the Epic Collection The Final Threat, or in black and white spanning Essential Avengers 7 and 8.