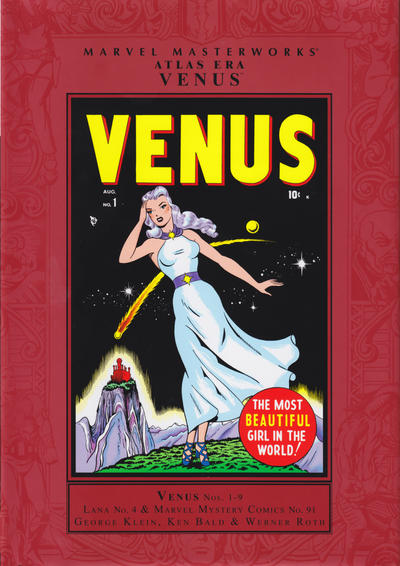 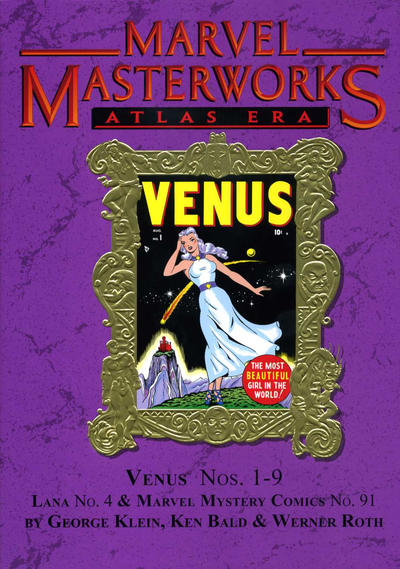 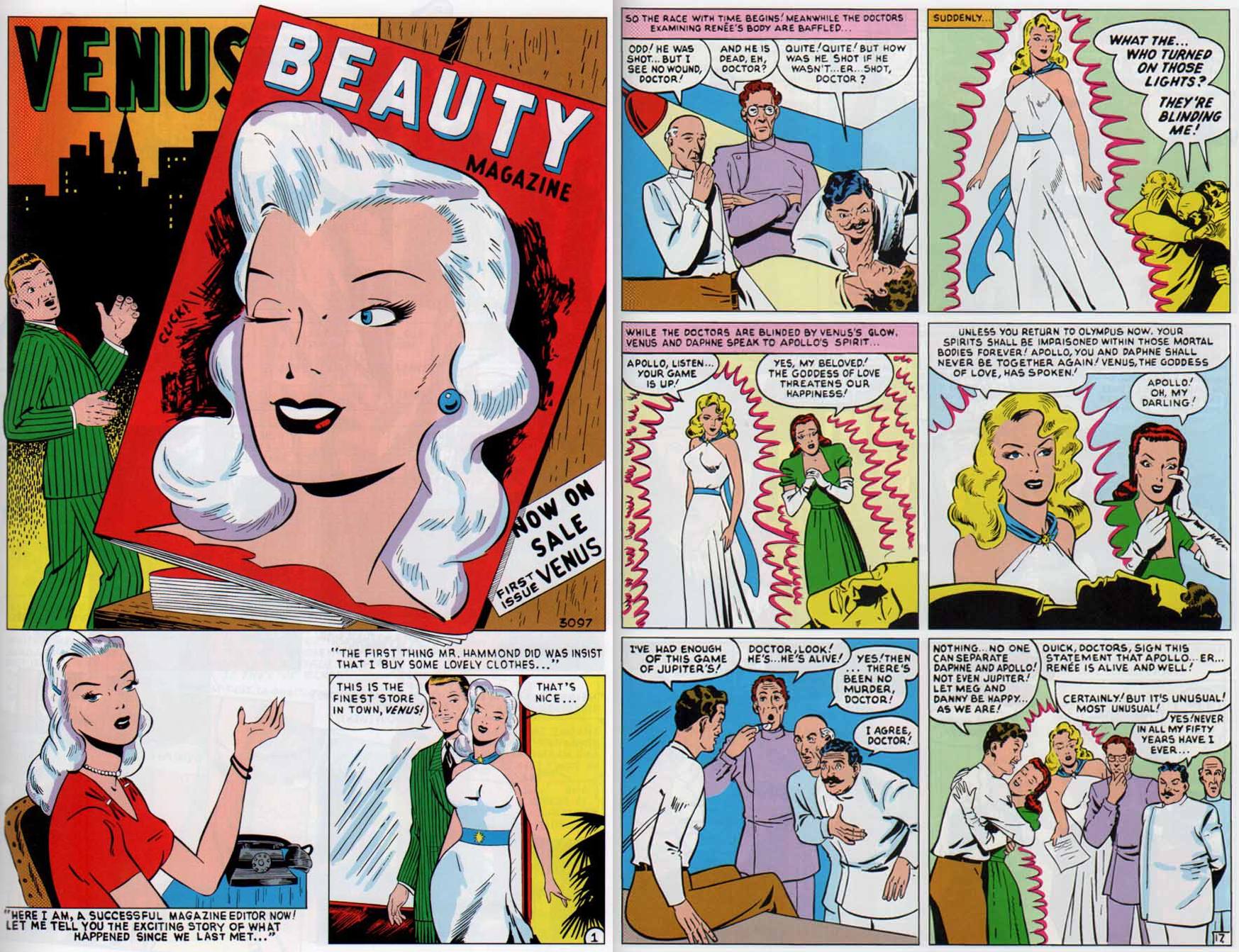 The goddess Venus, on the planet Venus, is bored. She wishes she could visit Earth, and to her surprise, wishing makes it so (just as if she had divine powers!). In New York her astonishing beauty brings her to the attention of publisher Whitney Hammond, who makes her the new editor of Beauty magazine. This irks his assistant Della Mason, who had designs on both job and publisher.

Such is the premise of this delightful series launched in 1948, one of two female-led titles Atlas launched then (the other being Sun Girl). Early stories follow a fairly standard romance pattern – Della schemes against her rival, and comes undone, sometimes, though not always, because Venus uses her divine powers and connections. Early issues are drawn in a 1940s cartoonish style typical of light-hearted comics of the era. The comics collected here reach 1950, and the art gradually evolves a greater realism, more inspired by movies than cartoons. The art changes are paralleled by the stories becoming rather more serious. Romance is still at their heart, but in a more adult form – Whitney and Venus become involved. Other gods appear, and there’s a greater element of superheroic adventure. There is even a semi-regular villain, Jupiter’s brother Loki. Logic and consistency are never high priorities in this series.

There are also a number of back-up features. In early issues humour strips feature spendthrift actress Hedy De Vine. Later it’s generally typical romance stories of boy-meets-girl, in which one acts in a way that marks them out as a psychopath, causing the other to fall in love, rather than, say, take out a restraining order. Most extreme, perhaps, is ‘The Heart Within Me – Dead!’, in which a young woman is mourning her dead sweetheart until a new beau breaks into her home and destroys all mementos of the previous boyfriend. You can guess the result.

There are also text stories, generally of much the same ilk, though some have a crime theme in early issues. This reprint collection also includes some editorials written in an unsuccessful attempt to counter attacks on comics from psychiatrist Frederic Wertham. It might be considered that if Atlas wanted to argue comics are not corrupting children, perhaps including a full page sequence in which Venus strips down to her underwear was not the best idea.

Who was responsible for Venus is not clear. With the exception of a couple of one-page gag strips signed by Harvey Kurtzman (see Hey Look!), which would be unmistakable anyway, there are no credits. The early strips are probably drawn by George Klein and Ken Bald, as Michael J. Vassallo explains in the introduction, and the later more realistic ones by Werner Roth. The writers are even harder to determine, though one suspects Stan Lee is in the mix somewhere.

These are not particularly sophisticated comics. They are certainly not enlightened in portraying women. Most females, even Venus, are silly, and primarily concerned with marriage. Careers are generally seen as ideas to be put aside when the right man comes along. Meanwhile almost every male in the Venus stories falls in a pool of slobber at the very sight of her beauty. Balancing that, well over sixty years later the stories retain a light-hearted charm, and are noticeably less crude than a lot of 1940s material. Definitely worth trying if you fancy something a bit different.

Sadly, the promised second volume, covering the period when the book took a serious left turn into science fiction and horror, has never yet appeared.