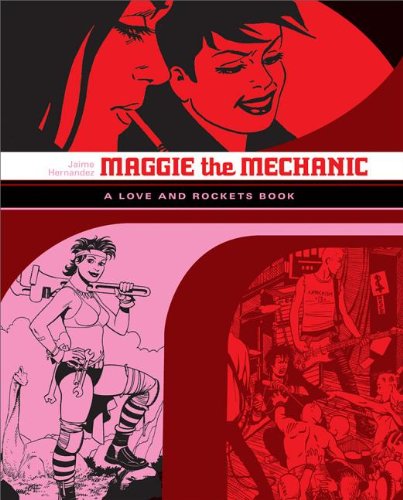 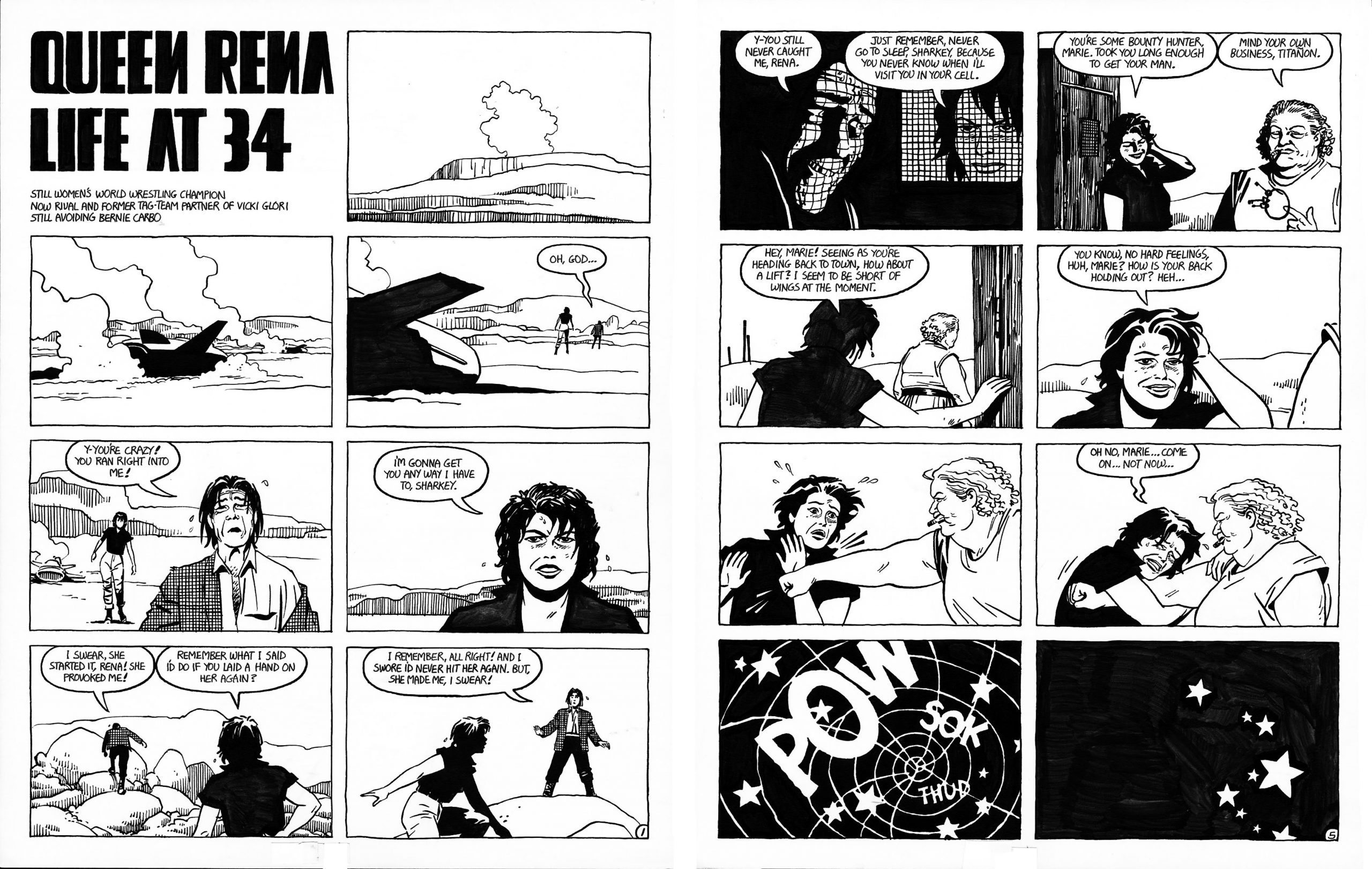 Maggie the Mechanic, the first volume of Love and Rockets Library (Locas Book 1) collects strips created by Jaime Hernandez in the black and white magazine he shared with his brother Gilbert, each of them writing and drawing half the pages. Jaime’s half was a consistently enthralling, sharply realised alternative world centred on the adventures of his heroine Maggie Chascarillo, a Mexican-American punk with a talent for fixing any kind of machinery from cars to robots and anti-gravity rocketships.

Jaime Hernandez has become one of the all-time greats of the comics medium and his brilliance is undeniable by the time you’re halfway through this book. Right from the beginning, his ambition to make a different kind of comic is plain to see. He takes a lot of familiar science fiction and superhero fixings and throws a new twist on them by putting a different kind of protagonist in the centre of the action. The black and white linework is assured and interesting, with great choreography of action and attractive, engaging characters who have great visual dynamics, all different and distinctive. It’s also very funny and charming too as Maggie tells all about her adventures with her secret crush ‘pro-solar’ mechanic Rand Race in their action-packed land of dinosaurs and rockets by writing regular letters to her best friend and sometime lover Hopey, who is stuck back home in Hoppers with their circle of friends, including the gorgeous and flighty Penny Century, and strange proto-goth Izzy.

The science-fiction worlds of Zhato, Zymbodia and Chepan are contrasted with the equally striking busted-up, downbeat world of the suburban wasteland of Hoppers in Los Angeles where various teen subcultures clash with each other in dive bars and clubs. Hernandez switches between his characters hanging around outside punk gigs and getting money for gas to defusing time-bombs hidden inside robots. Both feel equally fresh and interesting because he puts the personalities of his protagonists at the centre of the narrative and everything is about how they react in their environments. It’s so well put together that from potentially stereotypical settings, intriguing people emerge who you want to be involved with.

Great stories in this volume besides the titular ‘Mechanics’ include ‘100 Rooms’: Penny invites Maggie, Hopey, and Isabel to the massive Costigan Manor West in Badgeport. Maggie gets lost in its vastness on the way back from the bathroom, hijinks ensue. There’s a quick cameo at the beginning from Maggie’s aunt Vicki Glori which establishes the wrestling world that will go on to play a major part in the ongoing saga of Locas. In the sprawling adventure ‘Las Mujeres Perdidas’ (‘The Lost Women’), Maggie and Rand Race travel to Chepan, an island in the Pacific, to fix robots but find themselves in the middle of an insurrection. Maggie and the larger-than-life, legendary hero Rena Titañon are still on the island when it gets bombed and no trace of them is found in the wreckage.

This collection of 270 pages of comics, sharply printed on good quality paper, is superb value. With all of Hernandez’ stories from the first five years of L&R in one volume, including a number of short stories not collected in the hardcover Locas, it’s the ideal way to enter Maggie’s universe.