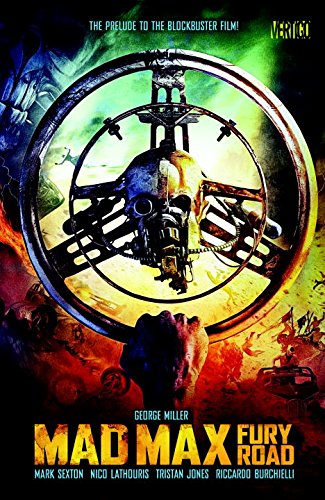 A decade on from his third and most ambitious Mad Max film Beyond the Thunderdome, George Miller began thinking about a fourth. He completed the storyboards in 2001, but raising the money to make the movie was difficult. While delay followed delay, Miller had plenty of time to consider the backstory for Fury Road while working on other projects. When he eventually began filming in 2013 he not only knew where all the major protagonists were going, but also where they’d come from. When the actors were cast he was able to explain to them how their characters had arrived at the point where Fury Road began.

This material was only used to build characters on set, but eventually Miller took storyboard artist Mark Sexton up on his suggestion that there be a Mad Max comic, and this preparatory material was the ideal content. The background stories of some characters like Nux and Immortan Joe only require a brief telling, while that of Furiosa is incorporated into the bigger story of Immortan Joe’s wives. The longest tale is that of Max himself, skimming over events from the previous movies before moving him from the Thunderdome to the road. Endearingly, the book closes with the tale of how the War Rig was constructed.

That’s a really imaginative piece of myth-making, giving the histories of all the vehicles and accessories that make up this monster, and nicely illustrated by the man who designed it in the first place, Peter Pound. The art’s wonderful, part Joe Kubert, part Carlos Ezquerra, a hint of Brendan McCarthy and very stylish.

As co-writers of the film, Mark Sexton and Nick Lathouris have an authentic narrative voice when presenting Miller’s stories, fleshing them out where necessary and dialoguing them when not. Sexton also contributes art (sample page), ironically his the style perhaps least suited to Mad Max, being too refined and clean, when the other chosen artists are all from the gritty school. As the film is essentially one prolonged chase sequence with minor pauses, it’s interesting to see the characters under other circumstances, Nux as an infant or Max back in the Thunderdome.

So far, so good. The backstories all work for the characters as seen in the film, but the Furiosa segment was considered by some to be brutal and oppressive beyond the requirements of a brutal and oppressive society. The women referred to as his wives by Immortan Joe are revealed to have forged their bonds in an atmosphere of deprivation and rape. It’s a story choice that didn’t sit well with a lot of people on release, but is consistent with the desperate world and characters that Miller created, and not illustrated in exploitative fashion by Tristan Jones or Szymon Kudranski. It is, however, the weakest of the material here, over-extended and gloomy.

Max’s story is inevitably the most iconic, true to the film and the previously established character. As we know Max will survive, the suspense is generated by his missions. Will he succeed in his Thunderdome objective and will his subsequent rescue be a success?

As film tie-ins go, this provides a baseline entertainment at worst, which isn’t often, and thrilling action adventure at best. Anyone who enjoyed the film can approach with confidence.