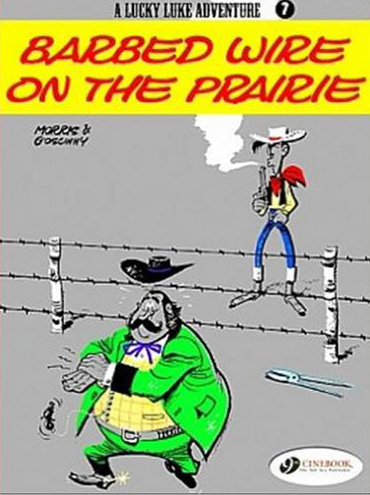 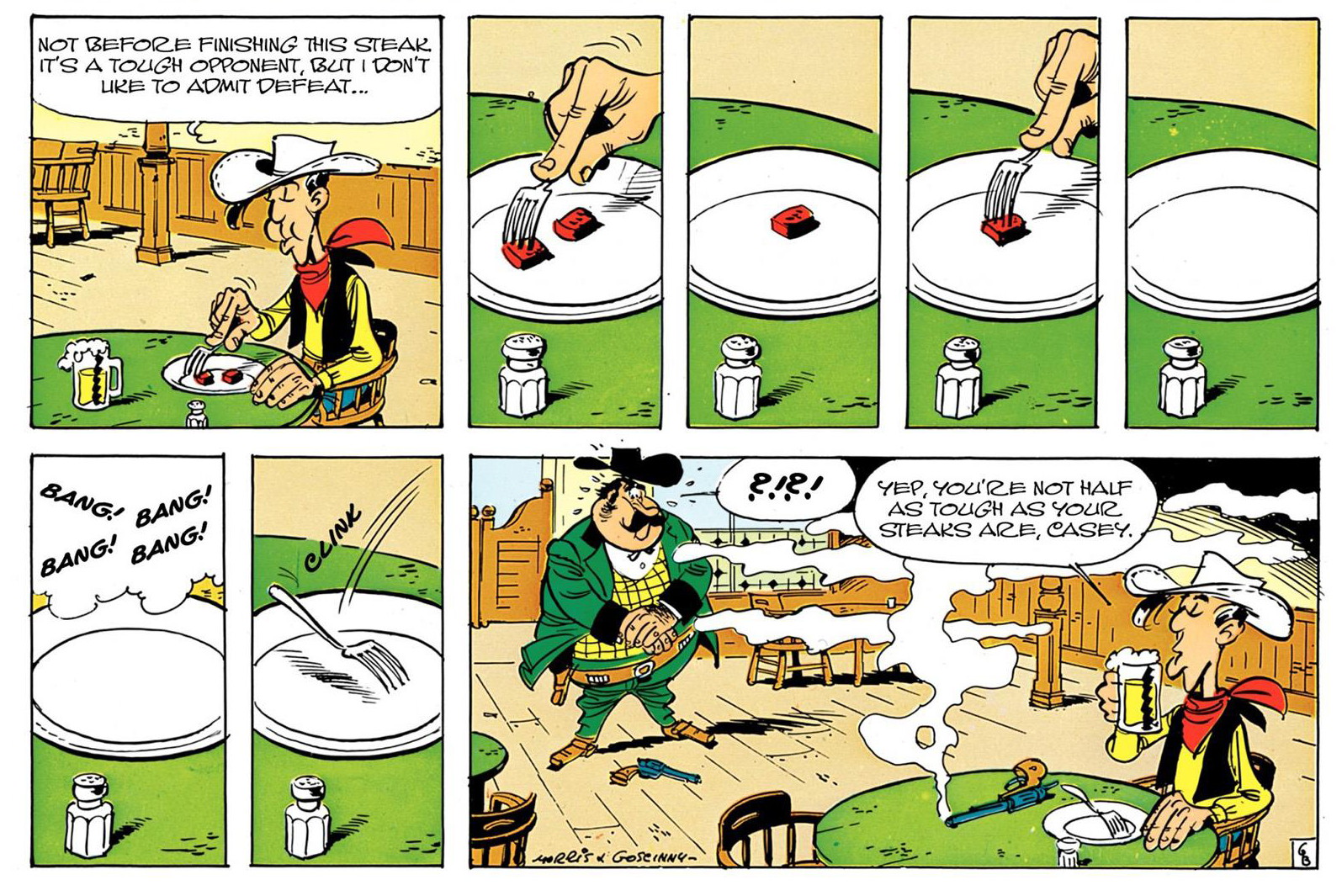 Barbed Wire on the Prairie, by artist Maurice de Bevère, aka Morris, and writer René (Asterix) Goscinny, is a Ronseal title: it does exactly what it says on the tin. Our story concerns the introduction of barbed wire to the American prairies, something that was literally as well as figuratively divisive, pitting farmers against powerful cattle barons in a land where meat was king.

The book opens with a brief essay on the growth of the cattle industry in the Wild West, and the inevitable confrontations this caused between the cowboys driving the massive herds and the poor farmers whose land they were often driving them across, with predictable consequences for the farmland. It’s one such cattle baron, Cass Casey, and his attempt to have a farmer lynched that sees Lucky Luke join our tale. Luke is the only person that won’t sit by and do nothing while an innocent man is hanged. Casey foolishly tries to out-draw our hero, something many men have tried, none with any success. Defeated and enraged, Casey vows revenge on the farmer, Vernon Felps, and his new guardian angel.

And so begins a campaign of harassment that leaves Vernon with little choice but to erect barbed wire fencing. This is such an incendiary idea that when Luke and Vernon try to buy it in the local store the storekeeper flees town with his family. So they order it from out of town, and the stagecoach is hijacked and wrapped in the wire. Eventually Luke has to resort to subterfuge, disguising himself as an Indian to sneak past Casey’s roadblocks. Much of the action revolves around the barbed wire, both the acquisition of it and the imaginative uses that it can be put to when used against a larger force by an imaginative protagonist.

Luke continues to thwart the many and varied attempts to drive Vernon off his land, and things escalate, as these things usually do, with everyone suffering, until Mother Nature herself steps in to draw matters to a close.

Much like In the Shadow of the Derricks, which touched upon the environmental damage wrought by the petroleum industry, this book has a strong green message, especially as the creators were well aware of the harm that would be done to the land in question by excessive grazing in later years. As always, the historical research is accurate and detailed, though never at the expense of the plot, with Morris and Goscinny only too happy to deviate from historical fact when it meant a funnier story.

Morris’s artwork is slick, even if many of the backgrounds are sparse, and this book lacks the ugly characters that mar some of the other titles. Though mostly drawn in strip form, larger panels are used effectively throughout when necessary; usually to show one of the novel ways that Luke has used barbed wire.

The book is fairly wordy, unlike, for example, the Tintin books, where slapstick is often used to provide welcome breaks from a bulk of dialogue or exposition. However, it is easy to follow, even for fairly young readers. Goscinny manages, as always, to pack a lot into the story, whether it’s historical detail or plot, and he uses many familiar Western tropes, often subverting them in amusing ways. In a genre full of anti-heroes, Lucky Luke is also an admirably moral character. As always, it’s his sharp mind, rather than his sharpshooting, that ultimately saves the day. 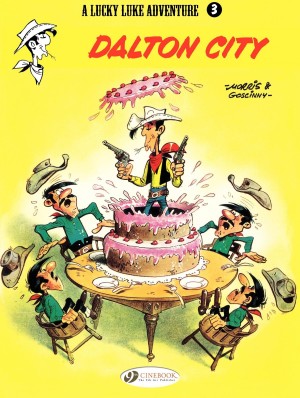