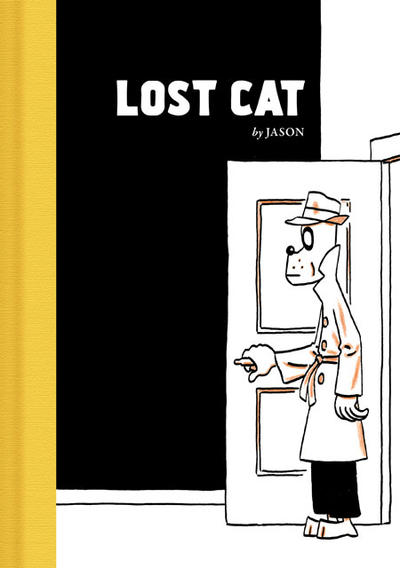 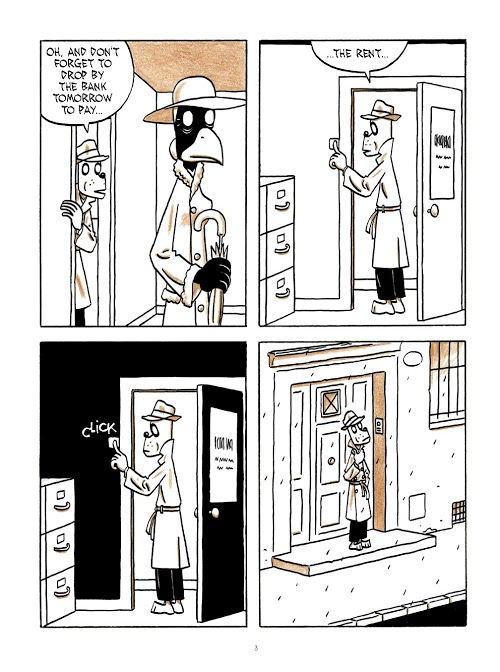 Jason is secretly Norwegian John Arne Saeterrøy, who turned almost exclusively to producing graphic novels in 2002. He is a global star among the cognoscenti and has won many major awards from all over the planet. Here Jason returns to full length tales (160 pages) after some years producing shorter album-style pieces, wherein his uniquely laconic, anthropomorphic art-stylings inform a surprisingly edgy tale of lost loves, scurrilous misdeeds and uncanny sinister secrets.

The stylised artwork is delivered in formalised page layouts, rendered in a minimalist evolution of Hergé’s ligne claire style. There are solid blacks, thick outlines and settings of seductive simplicity, augmented here by mesmerising hints in earth-tones enhancing the hard, moody, suspenseful and utterly engrossing world of French cinema verité. Jason’s work always jumps directly into the reader’s brain and heart, using beastly and unnatural players to gently pose eternal questions about basic human needs in a soft, but relentless quest for answers.

The deeper material often evades the senses on first reading due to clever gags and safe, familiar funny-animal characters, which indicates just how good a cartoonist and storyteller Jason is. This would be a terrific yarn even without his superbly understated art, but in combination with his dead-on, deadpan pastiche of The Big Sleep and other monochrome movies, the result is narrative dynamite.

This a scarily evocative romantic puzzle with its roots in Raymond Chandler mysteries, tipping a slouched hat to Hollywood Noir, B-Movie sci-fi and psychologically underpinned melodramas, with the artist’s traditionally wordless primal art supplemented by sparse and spartan dialogue and enhanced to a macabre degree by skilled use of silence and moment.

This slyly beguiling detective story opens as seedy shamus Dan Delon, specialist in tawdry divorce cases, sees a poster concerning a lost cat. After accidentally finding the missing moggy, he returns it to the solitary, sombre yet oddly alluring bookshop proprietor Charlotte. The two lonely people enjoy a coffee and stilted conversation before Dan departs, but his thoughts return to Charlotte. Despite knowing better, the gumshoe inserts himself into the staid, sedate woman’s life and his life slowly unfolds.

Utilising with devastating effect that quality of cold, bleak yet perfectly harnessed stillness that makes Scandinavian crime dramas such addictive fare, Lost Cat resonates with the artist’s favourite themes and shines with his visual dexterity. It discloses a decidedly different slant on secrets and obsessions, in a tale strictly for adults which nonetheless allows us to look at the world through wide-open young eyes.