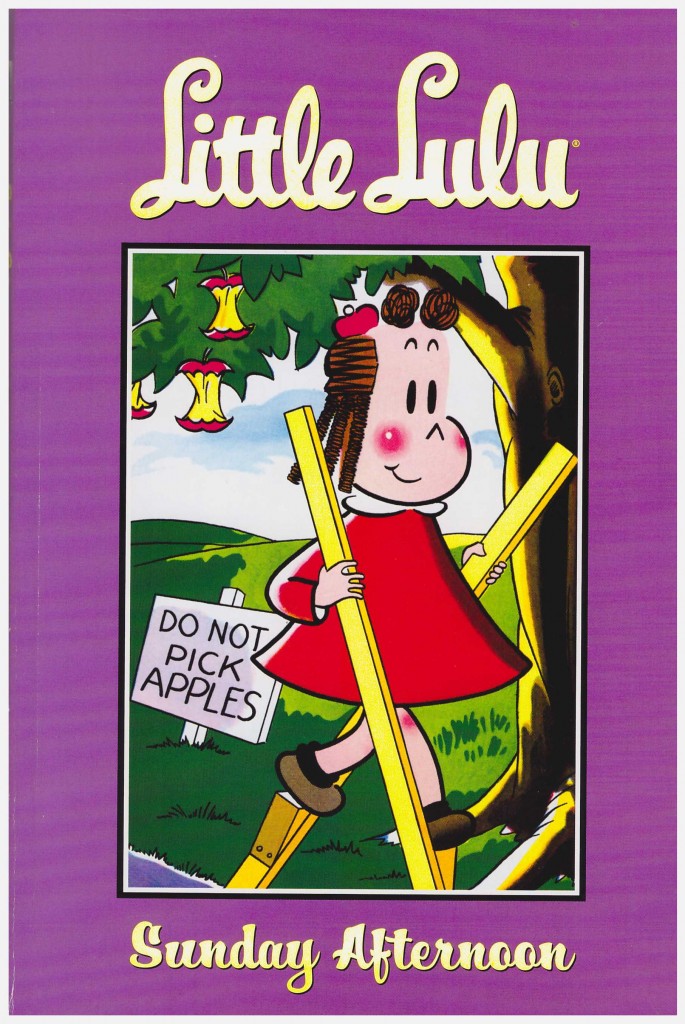 As characterised by John Stanley, Little Lulu was a likeable child, always thinking, perhaps a little smart beyond her years, and rarely unable to outwit those around her. She wouldn’t have worked, though, without someone to play off, and that’s Tubby, the first of the memorable supporting characters with which Stanley populated Lulu’s neighbourhood.

Lulu’s creator Marge Buell occasionally featured an overweight kid called Joe in her gag panels, but Stanley re-christened him Tubby and according to the needs of the story he’s Lulu’s rival or friend. This was an endearing strength of the strip. Despite his greed and feeble attempts at enforcing his masculinity, Tubby’s basically a solid kid, just a boy, and Lulu’s fond of him. This doesn’t prevent her out-manoeuvring his schemes, nor becoming jealous when he’s seen with the more glamorous Dolly in a particularly fine early story.

There’s a geniality to Stanley’s strips, even when featuring such sinister topics as Lulu being abducted and held for ransom, mistakenly identified as the daughter of wealthy parents. She takes it all in her stride, even helping to create the badly-spelled ransom note. That story exemplifies how Stanley’s approach modified as he became more familiar with character and audience. Kidnapping wouldn’t be a suitable topic for later material, never mind Lulu spraying bullets about the place as she escapes.

Also here is possibly the longest Little Lulu Stanley produced, as Tubby is caught playing hooky by Lulu, whose best attempts to guide him to school just result in one mishap after another. It contains a further indication that Stanley hadn’t quite settled into his rhythm as Lulu lies near the conclusion, at odds with her later characterisation as a paragon of virtue.

That story features the first appearance of Tubby’s clubhouse, not yet adorned with the legend ‘No Girls Allowed’. Tubby and friends have their own little gang, featured here, but as anonymous prototypes. They’d eventually distil to three other members. Tubby rapidly became popular enough to merit a solo story in Lulu’s comic, and, repeating the same torturous progress through editions of Four Color as Lulu had, eventually graduated to his own title.

So timeless are Stanley’s stories that the occasional reminder that they were produced in 1946 and 1947 surprises. Mid volume Lulu sees a television set for the first time, a bulky item with a small screen. “Gosh, isn’t Television wonderful?”, she says, “Not for us kids it isn’t”, replies Tubby after a well set-up gag in which they mistake the content as instructions.

There’s no definitive record of who drew the strips. It can be confidently assumed that Stanley provides the layouts for those he didn’t draw, but there are also likely to be contributions from Irving Tripp and Charles Hedinger who both pencilled and inked stories during the period before Stanley settled on Tripp as his regular collaborator. Both mimic Stanley’s style so accurately, identification is all-but impossible.