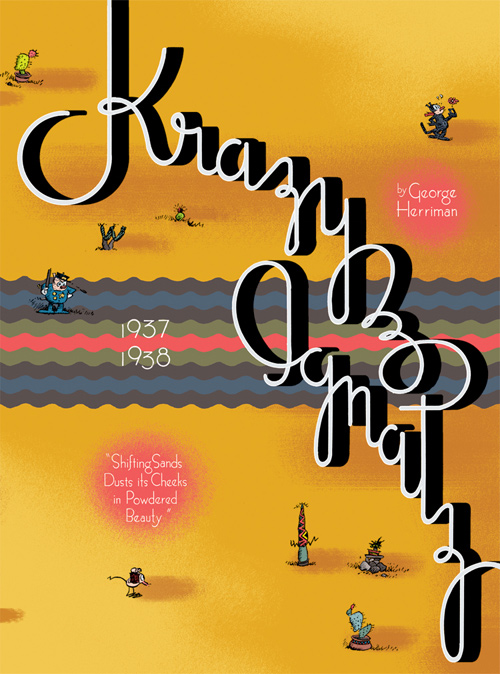 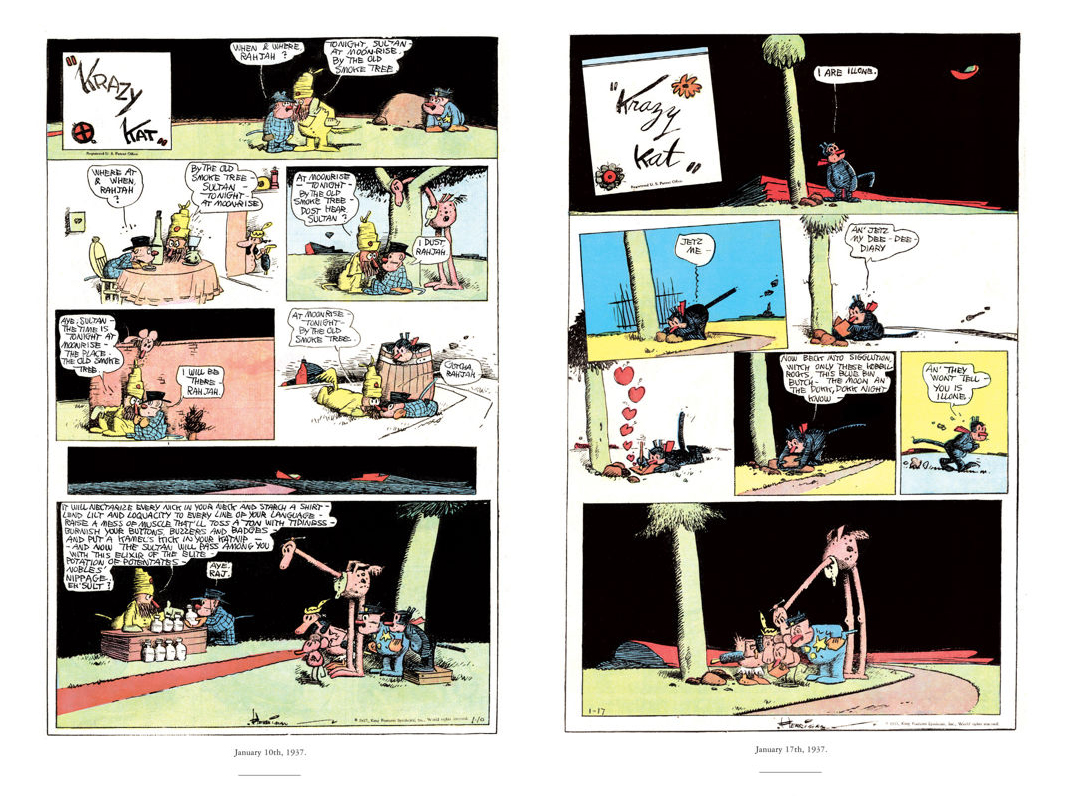 The tenth volume of George Herriman’s complete Krazy Kat Sunday pages presents two years of this comics masterpiece in full colour throughout. There’s no introductory essay this time, just pages of great strips, although there are a couple of extras: a large photo of George Herriman, hatless, with another man who is presumably also a cartoonist. There’s also a very dramatically lovely colour drawing signed from Herriman to a collector called Gaylord Beaman, and another signed cartoon for J. P. O’Farrell, a trader in Arizona. The dynamic compositions of the two colour drawings match all the highly graphic treatments that Herriman applies to the Sunday pages in this collection, which show an impressive variety of styles and colour schemes that really take the jokes and playlets to a whole new level of sophistication.

The dazzling drawing doesn’t mean that Herriman was any less interested in slapstick. The mixture of different styles of humour, poetic interludes, occasional quiet moments and surreal silliness continued. There’s even some in-joking, as in the August 8 strip (page 43) where Mrs Kwakk-Wakk decides to give Ignatz Mouse the benefit of some gossip she’s heard. She tells him that “Spinach – (blow me down) – a Verdure, if eaten with an avidity, will render one brave, courageous, fearless and possessed of a great power of “splat” with which no kop can kope -” and Ignatz’s frenzy to eat as much of it as he can is only matched by Officer Pupp’s determination to eat more of it. It doesn’t work for them as well as it does for Popeye.

There’s a tweak to the format of the Sunday pages from December 11, 1938 onwards. The shape of the strip changes very slightly to leave a horizontal panel at the bottom of each page, to allow for an ad to be placed there in papers that wanted to use it. Herriman drew little extra jokes or picturesque illustrations in these spaces. There’s a pleasing circularity to this new configuration which harks back to the way The Family Upstairs strips were designed, and the tweaked layout continued for the rest of the strip’s existence. This very funny collection of masterful work from the pen of George Herriman is a beautifully restored delight. The Krazy & Ignatz series of books is one of the high points of 20th Century comics.