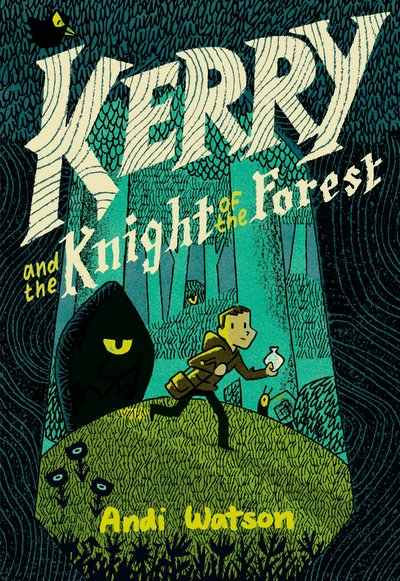 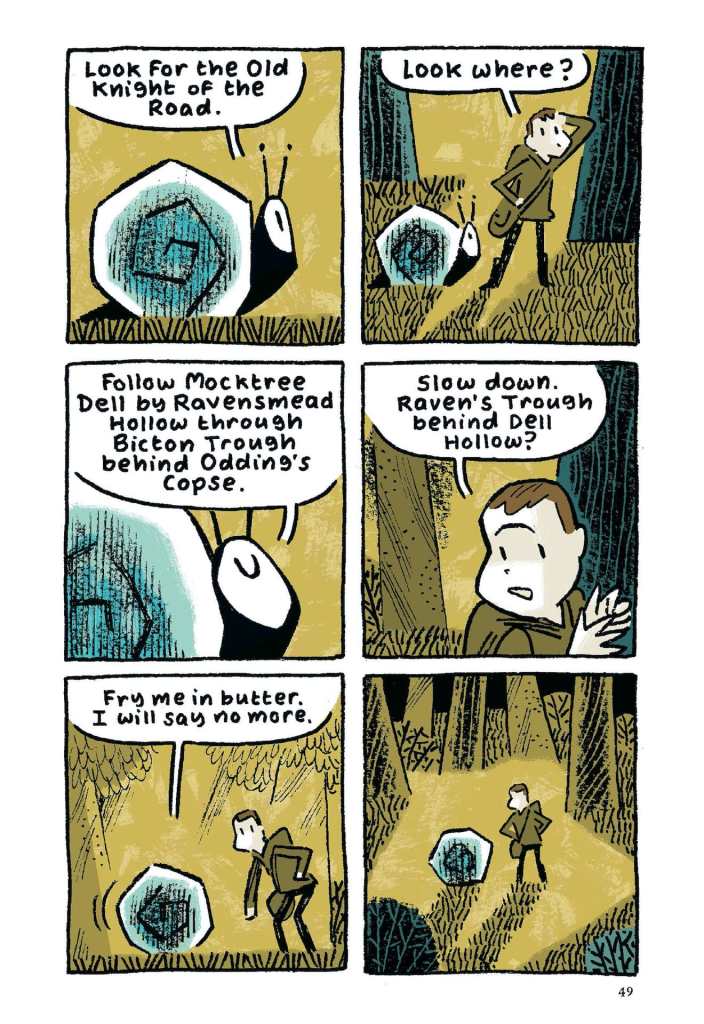 Kerry is in a hurry. He’s trying to reach Meadowsweet, and a strange glowing apparition of a little girl tells him the quickest way is through the forest. The deeper Kerry heads into the forest, the more strange creatures he meets, and the less likely it seems he’ll ever reach Meadowsweet.

Andi Watson starts Kerry and the Knight of the Forest with Kerry rushing about as if in a fevered dream, and never departs from that mood. The result is somewhat like Alice in Wonderland, with an innocent dropped into ever-changing strange circumstances and never entirely on top of them, but it’s darker, because almost the entire story takes place in the forest. It’s an ancient forest, populated not by the usual woodland creatures, but things that through mischief or malice are happy to prey on whoever stumbles into it, except if Kerry can locate the Knight, they may be able to provide safe passage.

Watson’s career alternates between children’s books and adult graphic novels, but the theme of someone lost and unable to control their circumstances is one he frequently references, and in tone this isn’t far removed from the confusions of The Book Tour. In one way the art is simple, showing only what’s needed, but it’s very effectively constructed from weird abstracted shapes and ink strokes, and the dark tones of the colours used provide the necessary atmosphere. The Knight is found, and Watson surprises by remaining true to the simple designs already in place, yet from that creates a sympathetic personality.

As Kerry stumbles from one trouble to the next Watson makes sure everything looks interesting, but while the reading starts that way, there’s a feeling of repetition as one threat replaces another. However, the younger readers at whom the book is aimed are more likely to enjoy the repetition, and not see it as such. We learn that the threats have a guiding force, and in the book’s final quarter we’re finally presented with it, and that’s where Kerry and the Knight of the Forest leaps back into life. Watson engineers an appropriate ending remaining true to the idea of the protagonists of ancient myths always ready to make a heroic sacrifice.

There’s considerable charm and mystery, but Kerry and the Knight of the Forest is a long book, and cutting fifty pages would have supplied a punchier experience. 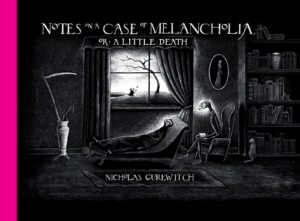