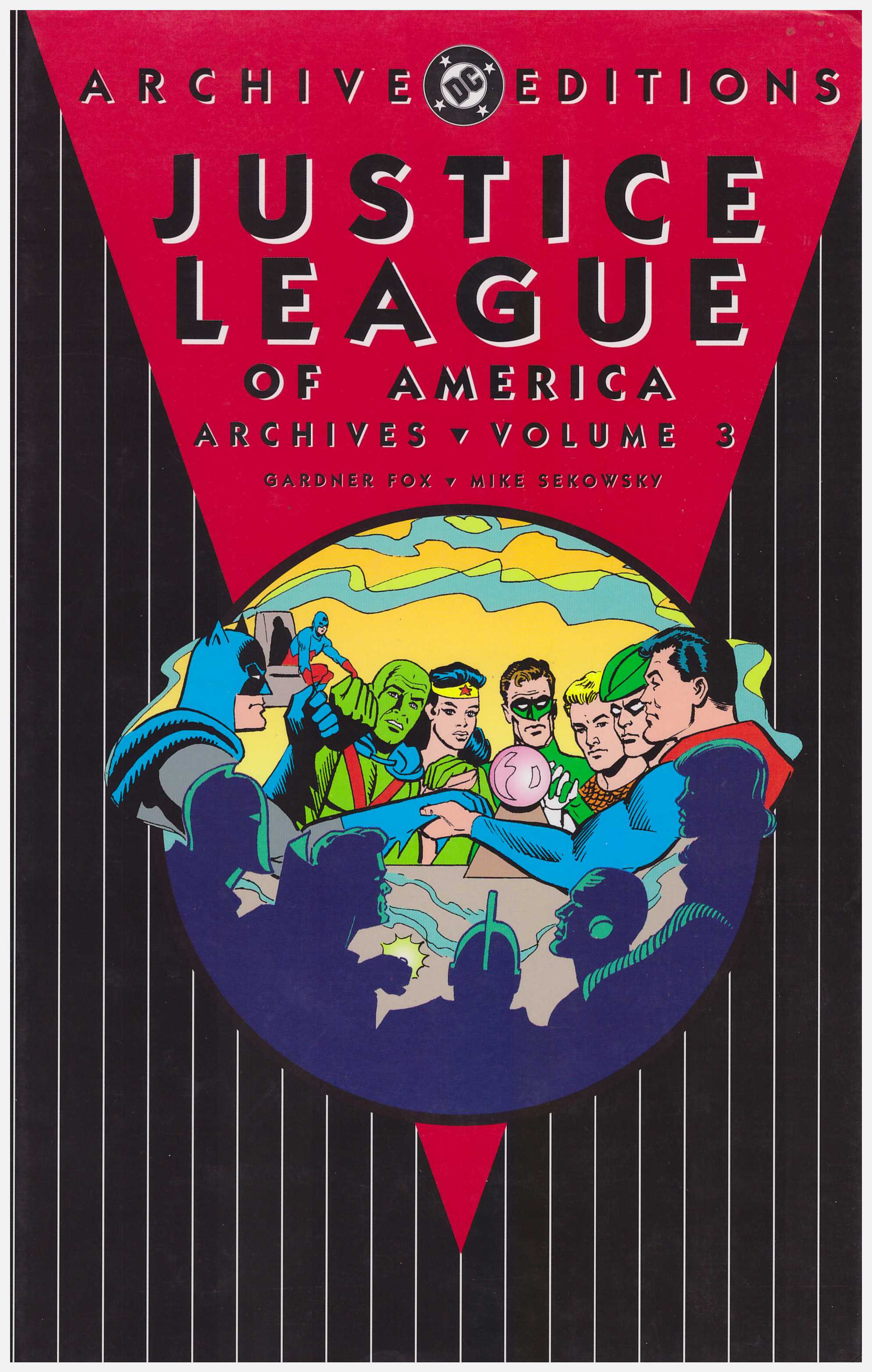 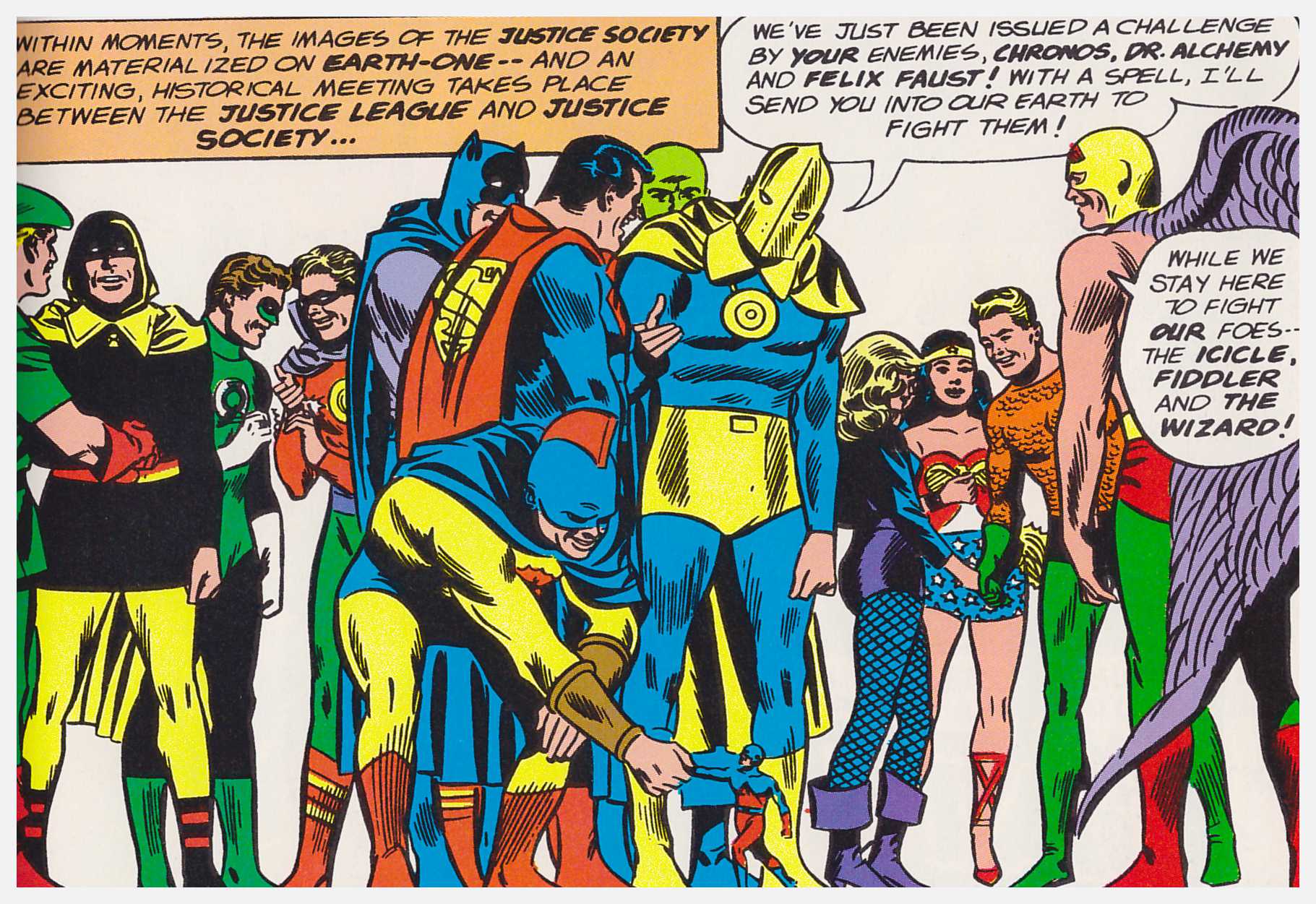 This third hardback collection of the earliest Justice League adventures displays some progress, and includes what’s probably the most thrillingly recalled DC story of the early 1960s. A proto-event arc.

A departure from rigid formula spices up this collection. Although the stories are still split into chapters, it’s no longer the case that the Justice League will always split into teams. While Gardner Fox had always ensured variety, this unshackling improves matters.

The story titles remain alluring: ‘The Cavern of Deadly Spheres’, ‘The Super-Exiles of Earth’ or ‘The Mystery of Spaceman X’, and are accompanied by covers far more dramatic than those of today promising an unreal situation. Unfortunately none live up to the billing.

This is not to deny there are clever elements to the plots. What begins as frankly the worst story here with a preposterous villain and ludicrous circumstances takes a sharp left turn into something rather eccentric. Another features a contrivance ensuring only irritating JLA mascot Snapper Carr can save the day by defeating foes immune to Superman, Wonder Woman and Green Lantern. There’s an early return for Doctor Destiny and his dream manipulation, and Mike Sekowsky’s illustration of a giant silent astronaut intervening in life-threatening events has an eerie poignant quality.

For the modern reader, though, the problem remains that the only purpose of dialogue is to forward the plot. This is a character free zone. Is it Flash or Batman who opines “If only all criminals everywhere could understand that they haven’t a chance to win over us because we fight for justice!”, Superman or Martian Manhunter who tells Wonder Woman “If our male super muscles won’t work your female muscles can’t bend these bars either!”

Many will also have a problem with Sekowsky’s eccentric art. This was not a man who drew for posterity, nor for selling his original pages. His layouts prioritised speed, and he draws some of the maddest, staring eyes in the business, yet it’s astounding to see the amount of characters he’ll pack into some panels, and he’ll provide a credible depiction of anything asked of him. Look out for the particularly goofy Rockmen of Pluto in their one panel cameo.

Since DC began the process of refurbishing their heroes in 1956, many older fans had hoped for the reintroduction of their childhood favourites The Justice Society of America. And here they are, in an honest to goodness two chapter story, almost unheard of in 1963.

That story closes the book, and remains the highlight, one that would prompt the Justice Society to pay an annual visit as long as the series lasted. Fox begins with a clever, if not entirely credible, conceit. Three villains announce to the Justice League that they’ll commit a robbery and no-one will be able to track them down. Simultaneously on an alternate Earth the Justice Society have been issued with a similar challenge. As the only superhero to have visited this alternate Earth, the Flash is key.

As tame as it may seem today with the polite, characterless heroes introducing themselves to each other, a small spark of magic transfers across the decades. Readers can still buy into the belief of unfamiliarity. Otherwise, though, much as was the case for previous volumes, those familiar with the stories from childhood will probably engage, while any new readers will consider them hopelessly dated. Those still curious might prefer to sample the same stories in black and white on non-gloss paper in Showcase Presents Justice League of America volume two.