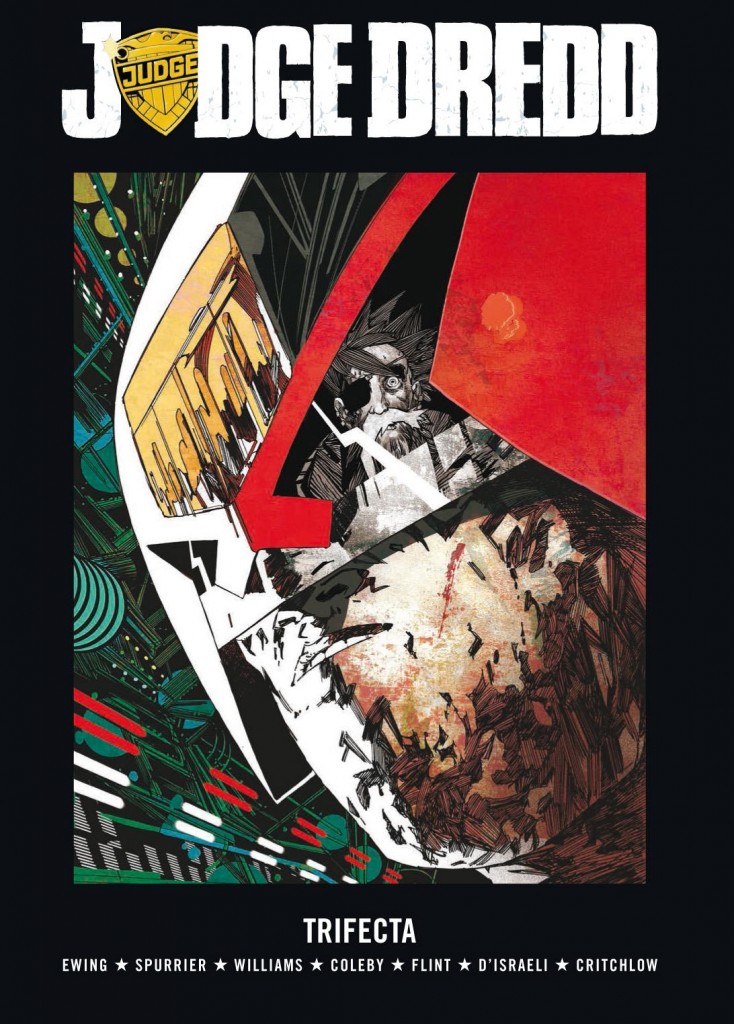 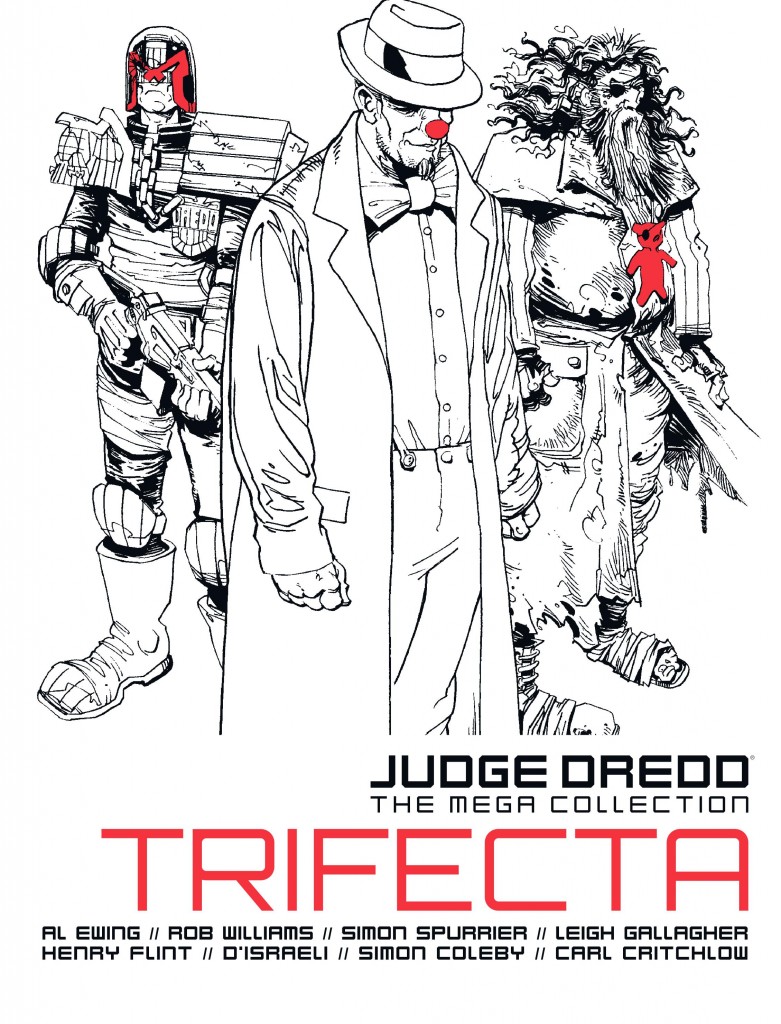 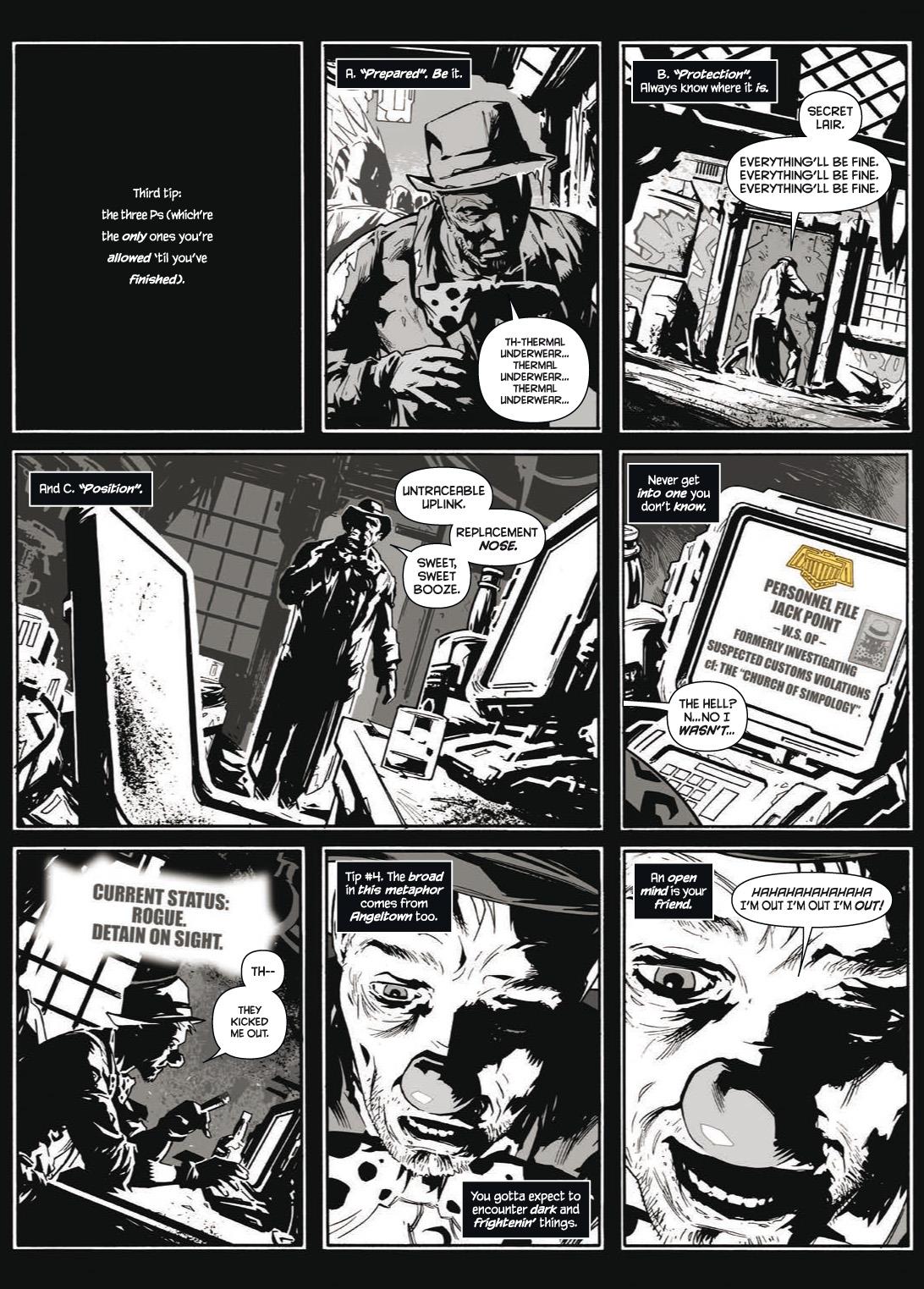 Trifecta is unique among Judge Dredd graphic novels in switching between three separate features, all set in Mega City One, by three different creative teams. There’s a reason three seemingly disparate stories are not just gathered between two covers, but intermingled as the graphic novel proceeds. Spolier alert. Don’t want to know, don’t read beyond the fourth paragraph.

The Simping Detective and Low Life both feature judges undercover. Low Life’s Dirty Frank has been undercover so long his sanity had been discarded, and the Simping Detective’s Jake Point is equally damaged, still on the job, but alcohol soused and cynical, with Simon Spurrier’s first person narrative an effective 1950s tough guy fiction pastiche. Jake’s official back-up support mechanism appears to have cut him loose. Dirty Frank’s also in above his head among a group of predatory financiers as Rob Williams satirises the single-mindedness of the few whose greed sent the world economy down the toilet in 2008. Meanwhile Judge Dredd is concerned about a power play taking place in the Council of Judges, those who set the tone and law for Mega City One.

Mirroring the noir narrative, Jake’s strip is well illustrated in shadowy style by Simon Coleby (sample page), primarily in black and white, but notable colour montages also feature. There’s a great contrast in the artistic styles, with the equally good D’Israeli almost channelling Kevin O’Neill with his spiky character designs for Low Life. Henry Flint is also on form for the Dredd pages.

Al Ewing’s good handle on Dredd is exemplified on the opening page. Back in the 1980s heyday of Judge Dredd writers John Wagner and Alan Grant regularly reminded readers of Dredd’s humourless intolerance and Ewing’s homage has a judge who apologies for excessive security methods curtly ordered to report for reassignment.

It’s a big surprise when Dredd storms into an apartment and straight into Jake’s strip. It takes a little longer for Low Life to connect, but when it does, it appears someone very highly placed in the Justice Department is manipulating matters to their own ends. Dredd has fingered the head of Black Ops division Judge Bachmann, with whom he’s had a previous run-in, and Ewing’s early episodes certainly indicate this is the case, with Bachmann a suitably sinister and manipulative presence. Ewing also makes good use of technology Wagner and Grant  employed as the basis for single stories then discarded. Central to all three tales is a list revealing the identity of every undercover judge in the city, and someone taking the opportunity to eliminate them. It’s a threat concluding with a neat twist.

There are clever elements to all threads. Spurrier takes the opportunity to move his character forward, Ewing ensures Dredd is on top of his game and Williams’ knowing idiot savant dialogue for Dirty Frank transmits well: “Dirty Frank digresses due to psychic epiphany”. However, the over-arching plot of a grab for power among corrupt judges is something that’s better handled in the later Endgame, although its nefarious means of replacing what’s considered the outmoded society of Mega City One is suitably ambitious.

All three writers contribute to the conclusion, nicely illustrated by Carl Critchlow, and Trifecta is very tidily tied up via a shadowy background presence. Not as effective is the downfall of someone who’s been the very epitome of cool planning, undone by a moment of emotional impulse.

Trifecta is a bold statement that on balance is just about carried off, but drags in places. It’s also available in hardback as part of Hachette’s Judge Dredd: The Mega Collection.