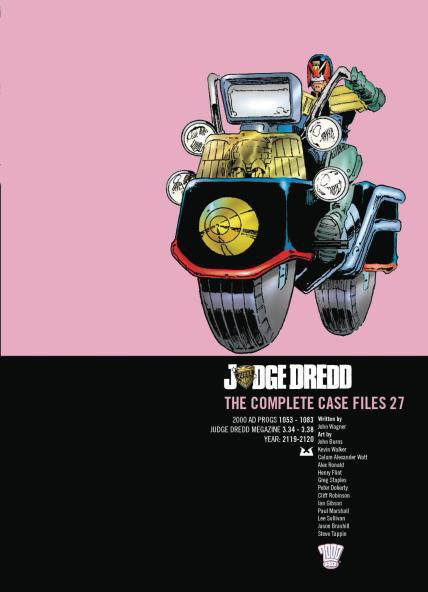 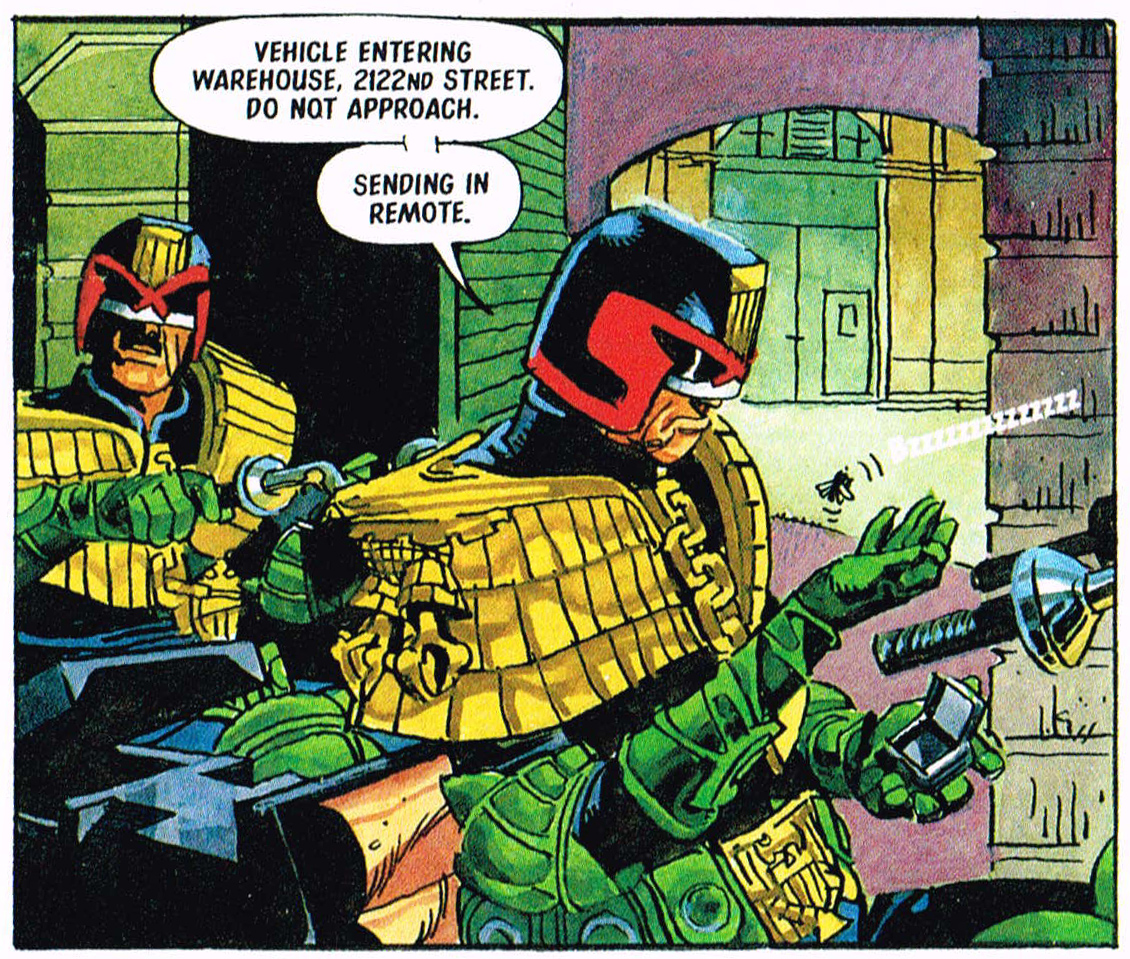 Case Files 27, written entirely by John Wagner, opens with ‘Holiday Special’, with superb John Burns artwork and a recycled plot featuring an activity that’s (barely) legal now and outlawed in Dredd’s world. In ‘Fast Food’ we have the always-entertaining fatties. Kevin Walker’s art complements the blackly comic and clever plot perfectly. Black comedy is clearly the theme here, as it continues throughout the bulk of the remaining tales.

‘Spooks’ and ‘A Walk on Gang Alley’ are both four parts ending on a humorous note, with nice artwork by Calum Alexander Watt and Alex Ronald respectively. ‘Mrs Gunderson’s Little Adventure’ features Mega-City One’s answer to Mr Magoo (though she’s deaf as a post as well as blind as a bat). This is a funny and lively, depicted with panache by Henry Flint, whose old-school Dredd is a joy to behold.

Greg Staples, one of the best recent artists, is on duty for ‘Attack of the Sex-Crazed Love Dolls’. As the title suggests, this is yet another tongue-in-cheek story. So much so, in fact, that it features what may well be a first for the strip’s title character: a gay kiss! (Dredd is assaulted by a male sex robot).

‘Spawney’ is much grittier than the preceding stories, and Peter Doherty’s art is superb: not flashy, but very realistic and convincing. The next two tales are weak, despite each featuring art from Dredd veterans. ‘Bo Peeper’ is lightweight fluff drawn by Cliff Robinson, and Ian Gibson’s ‘Bum Rap’ is weakened by wishy-washy colouring. The opposite is true on ‘Escape From Old New York Street’ in which superb colouring by Alan Craddock enhances slick art by Paul Marshall. This is another funny story, with Dredd on fine laconic form.

Lee Sullivan illustrates ‘The Story of Genes’, and his less-than-impressive artwork isn’t helped by one of Wagner’s few weak stories, but Paul Marshall is back for ‘To Die For’, yet another comedy with a heart of obsidian, which riffs on Frankenstein. ‘In The Year 2120’ is 22-pages that may have worked with better artwork. Jason Brashill is often very good, but his work here looks rushed, and the story is little more than a rehash of earlier, better work.

Material originally printed in 2000 AD concludes with ‘Missing’, in six parts, with artwork by Lee Sullivan. It’s again a weak effort by Wagner, one that may have been saved with flashy or impressive artwork, neither of which are on display.

There are only three Dredd stories originally from the more adult-oriented Megazine, the first two being single-part tales. ‘Ojay’ has artwork by Alex Ronald that’s so good it’s easy to mistake it for Frank Quitely. Steve Tappin on ‘Simple Domestic’ doesn’t quite match that, but he’s good enough on a story that aims for, and just about manages, hard-hitting and effecting.

Finally, we have the three-part ‘Predator Vs Judge Dredd’. The most remarkable thing is how pedestrian it is. The art, by Alcatena, looks stiff and dated, and the plot isn’t much better. Clearly aiming for a wider audience than usual, this is laid out in a clunky back-to-basics fashion that ignores the maxim of ‘show, don’t tell’. This feels like a missed opportunity. The Predator is pretty cool, but Dredd faces worse on an almost weekly basis.

There’s little in the way of outstanding Judge Dredd in this collection, but it contains many funny stories, and page after page of great art. And, importantly, it often does an excellent job of matching stories to eminently suitable artists.