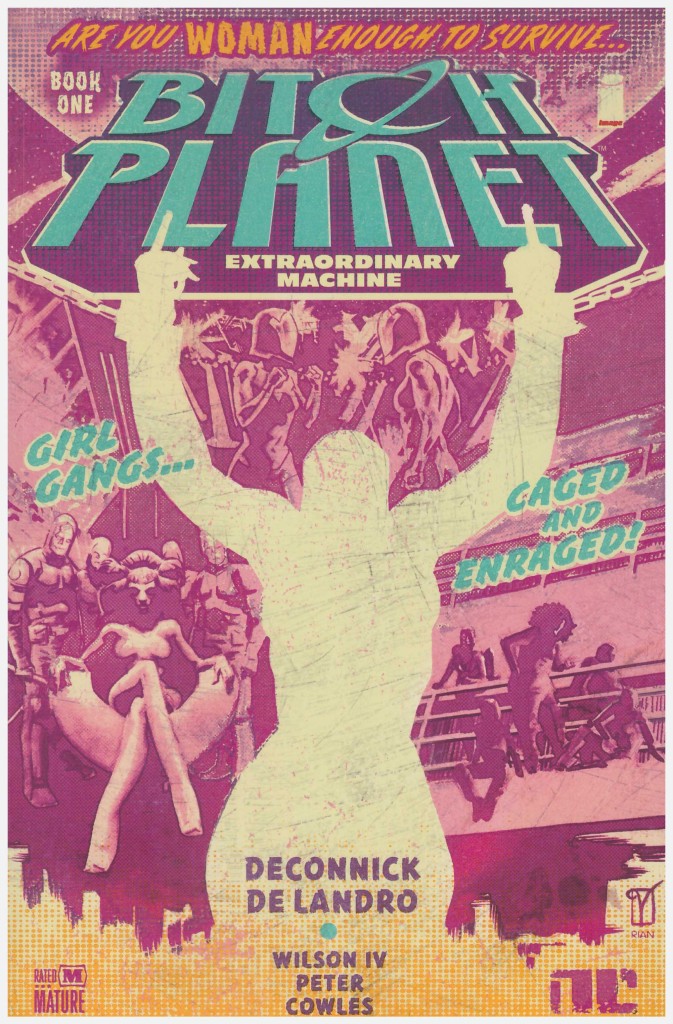 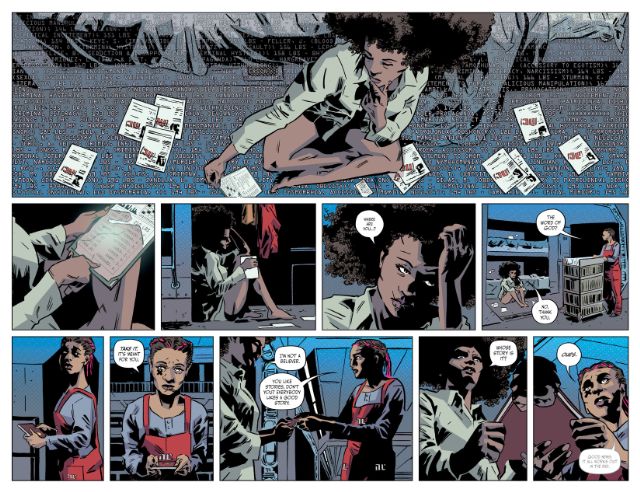 Bitch Planet is a clever and bombastic satire that works as a sort of exploitation movie plot for anyone who doesn’t pick up on the satirical subtext.

In a future not too far distant there’s a global patriarchy, and any woman considered non-compliant is shipped off for re-education during incarceration at the off-planet Auxilliary Compliance Outpost. Non-compliance comes in many forms, ranging from the crimes we acknowledge today to the sin of being fat, but the primary cause is disagreement with a man. The purpose of the outpost is to return women to society as more amenable. Or is it? Just as in the jails of the present day, reformation (here in insidious form) is preached, but practice proves otherwise.

The Handmaid’s Tale comes to mind as an obvious influence, with its similarly sinister subjugation of women, but Kelly Sue DeConnick hasn’t yet defined her society. It’s a peculiar stratification that appears to have combined business leaders with church iconography and propaganda, but that’s not really the point. That the context exists provides a viable background, and, of course, this is an extrapolation of the oppression many women already feel. Having set her parameters, DeConnick ensures her cast represent multicultural American society as it is today, although a topic not yet broached is the attitude of the extremist Muslim.

There’s a second way to redemption, and that’s by participating in sports. Deceit and manipulation are key themes of Bitch Planet, so there’s surely an ulterior purpose behind the offer made to a newcomer, the athletic Kamau Kogu to put together a sports team with the intention of matching it against professional franchises. As the selection process occurs Kamau receives plenty of advice and learns rapidly how the deck is stacked.

DeConnick splices this with variations of the scenes common to 1970s women in jail movies, and it’s from these that the most interesting character emerges. Penny Rolle is fat, but unconcerned about conforming to an objectified ideal. She’s tough and uncompromising, and the first of the cast to be the subject of a spotlight revealing her past, or aspects of it. As an aside reflecting the re-examination of cultural debris, portions are presented as if a comic produced before computer colouring, complete with colour dots and faked off register printing. Guest artist Robert Wilson IV isn’t quite as accomplished as the series co-creator Valentine De Landro, but it’s no great step down.

De Landro matches his approach to the needs of the plot very adeptly, action-oriented when required, yet convincing in quiet moments too. His cast is expressive, particularly when conveying the sleazy attitudes of those in charge. Extraordinary Machine is rated as mature, and there’s an element of having the cake and consuming it, as with the cavort for the pleasure of a voyeuristic guard, during which there’s not much subtlety about De Landro’s illustrations. Yes, it slots into the wider plot, but it seems to subvert the message.

Any message would be redundant if not sugar-coated, and De Connick rapidly develops a sympathy for the cast, a horror for their predicament, and hooks you into the ongoing plot, and the combination makes Bitch Planet worth following. Music is also referenced, with Fiona Apple providing the collection’s title, but a phrase recycled by John Lydon seems most apt in summing up the plot to date: “Anger is an energy”. The series continues in President Bitch. 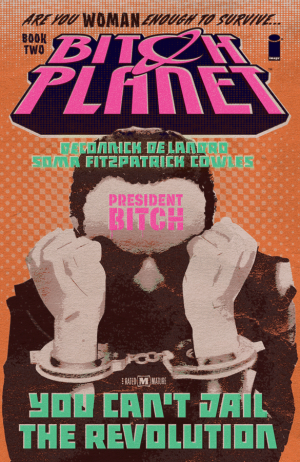