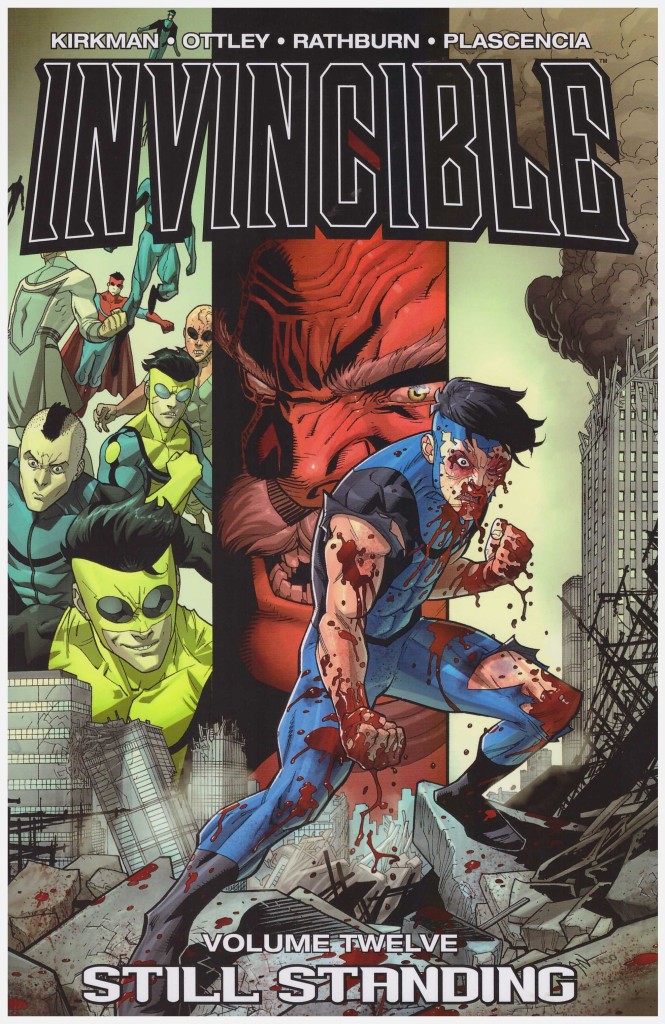 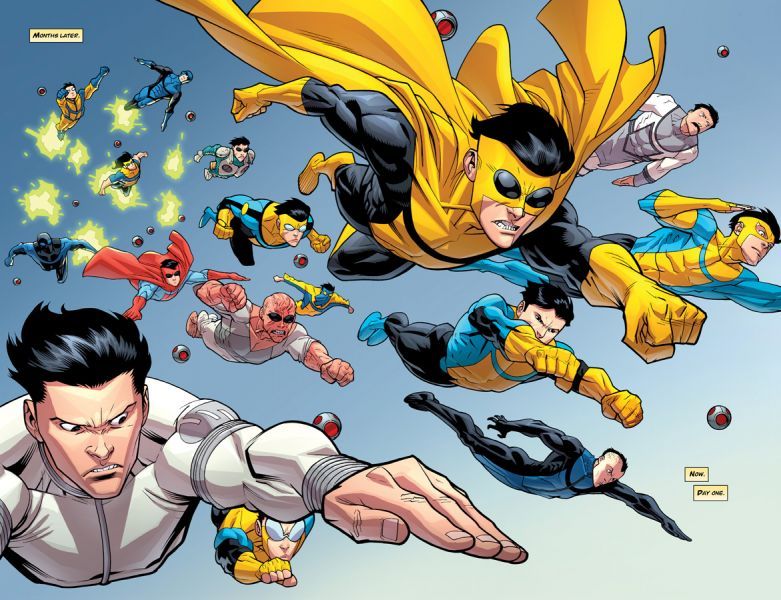 The cover featuring an incredibly bloodied and battered Invincible, the second such in three volumes, again totally represents the content within, as Invincible encounters foes matching even his extraordinary abilities. In two cases, in fact.

The first is an excellent and ambitious piece of storytelling on the part of Robert Kirkman. The type of widescreen plot that at Marvel or DC would sprawl over several titles and a core miniseries is here related in a single chapter covering four days. When last seen evolved scientific genius Angstrom Levy, was presumed to have been nullified, deposited on an alternate world where he could no longer threaten Invincible. Instead this prompted an investigation of other-dimensional worlds, from which Levy has collected a dozen alternate versions of Invincible, none of whom share his protective ethics when it comes to Earth. These alternates are let loose, and death, devastation and carnage ensues. It contrasts the relative calm of the previous Happy Days.

Ryan Ottley is challenged by presenting events in such compressed fashion, but is more than up to the task, delivering much of the story in a series of small illustrations over a spread framed by two larger vertical images extending the length of the page. Vertical panels are used throughout in extremely effective fashion, showing the alternates surveying their devastation, or portraying them fighting against various characters Kirkman has borrowed from other creators.

That battle, though, is but the opening salvo of this volume. Having already been severely tested, the last thing Invincible really requires is another near-invulnerable Viltrumite turning up on Earth. And due to the casualties suffered by other heroes in the opening chapter, there’s little chance of anyone helping him out. The following four chapters contrast the first by extending the suspense and desperation to almost unbearable levels. Again, Ottley is on top form, and devoting a spread to a bloodied head was an audacious choice. Whether deliberately so or by chance, in the seeming lack of all hope there are echoes of Steve Ditko’s Master Planner story in the early days of Spider-Man.

Those sequences alone would number Still Standing among the top Invincible collections, but Kirkman’s deft melding of soap opera style characterisation, future foreshadowing and good handle on a broad cast renders this the best to date. ‘Awesome’ is a grossly over-used adjective, but it applies here.

By the end some core relationships have shifted, although there’s some fine deceit on the part of global security agent Cedric Steadman, and the following Growing Pains is set up very nicely indeed.