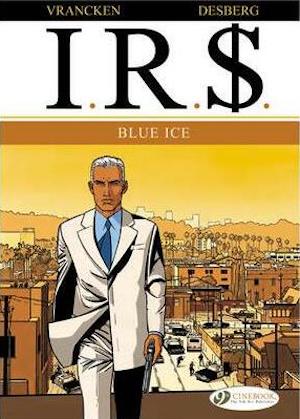 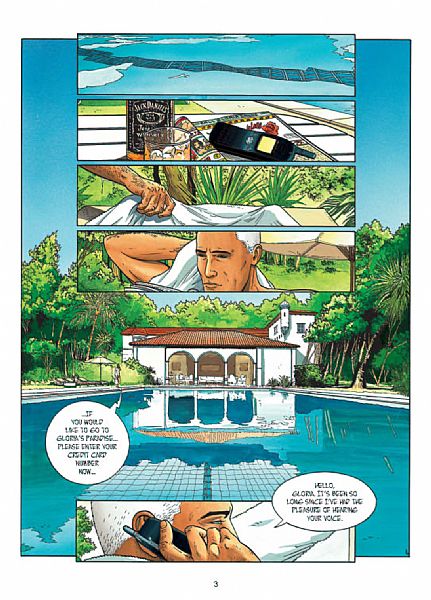 This second book, like the first, contains another complete story told over two volumes: Blue Ice and Narcocracy. This time around the action sees Larry B. Max, an I.R.S. agent who’s part James Bond and part Sherlock Holmes, face off against his very own Moriarty in a tale involving Mexican drug cartels.

Like Taxing Trails, this kicks off with an introduction to Larry’s none-more-lavish lifestyle before we see three men being executed in a variety of public places. It quickly becomes apparent that the executions are part of a hostile takeover, with all the Mexican cartels in the sights of a corrupt financier with a genius for making money. Apart from being a fitting foe for our impressive protagonist, this also gives the creators the opportunity to drop in some rants about globalisation and corporate practices. The second half of the story takes place in Mexico, where Larry’s lack of jurisdiction is dealt with in a fairly perfunctory manner. To complicate matters further, the Colombians are also involved, and everything gets a bit shooty.

Given its 15+ rating, there’s actually very little blood in this book. There’s ample opportunity for Bernard Vrancken to make everything a lot more Reservoir Dogs, but he chooses not too, and the amount of gore on display is very restrained. The same is true of the sexual content, which is more suggestive than anything else. The language is a bit strong, though.

Tarantino’s influence can be seen throughout, with one character resembling John Travolta in Pulp Fiction, and another actually referencing that movie. However, if writer Stephen Desberg hoped to invoke Tarantino he’s not terribly successful, with a great deal of the dialogue sounding pretty clunky. There’s still quite a lot of exposition, although Desberg has thoroughly researched his subject again. Sometimes that becomes painfully clear. He’s done his research and you’re going to know about it, even at the expense of the story’s pacing.

Vrancken’s art is also meticulously researched, and the level of detail is very impressive. However, as before, it’s let down by stiff figurework and faces that are less polished. The action scenes are slightly better choreographed than in the previous books, and it’s easier to see what’s going on. There are some nicely composed panels and dramatic flourishes, but the artist still makes some very strange decisions, like cutting to an extreme long shot in the middle of an explosive action scene. At one point in the story Larry descends a ladder on the outside of a building while holding a pistol in one hand. How did he manage that?

On the whole, this is an enjoyable slice of crime fiction from the more glamorous end of the spectrum. It all looks a bit 1980s, although some of that can probably be attributed to Larry’s fondness for white suits, something which gives the stories a Miami Vice vibe. The series continues with Silicia, Inc.