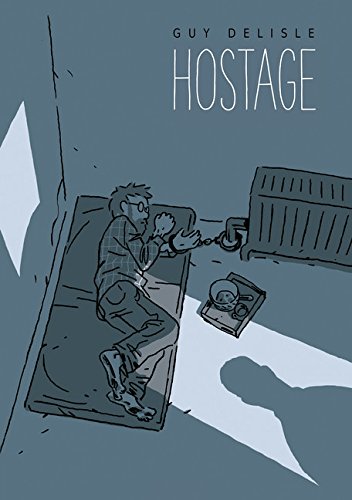 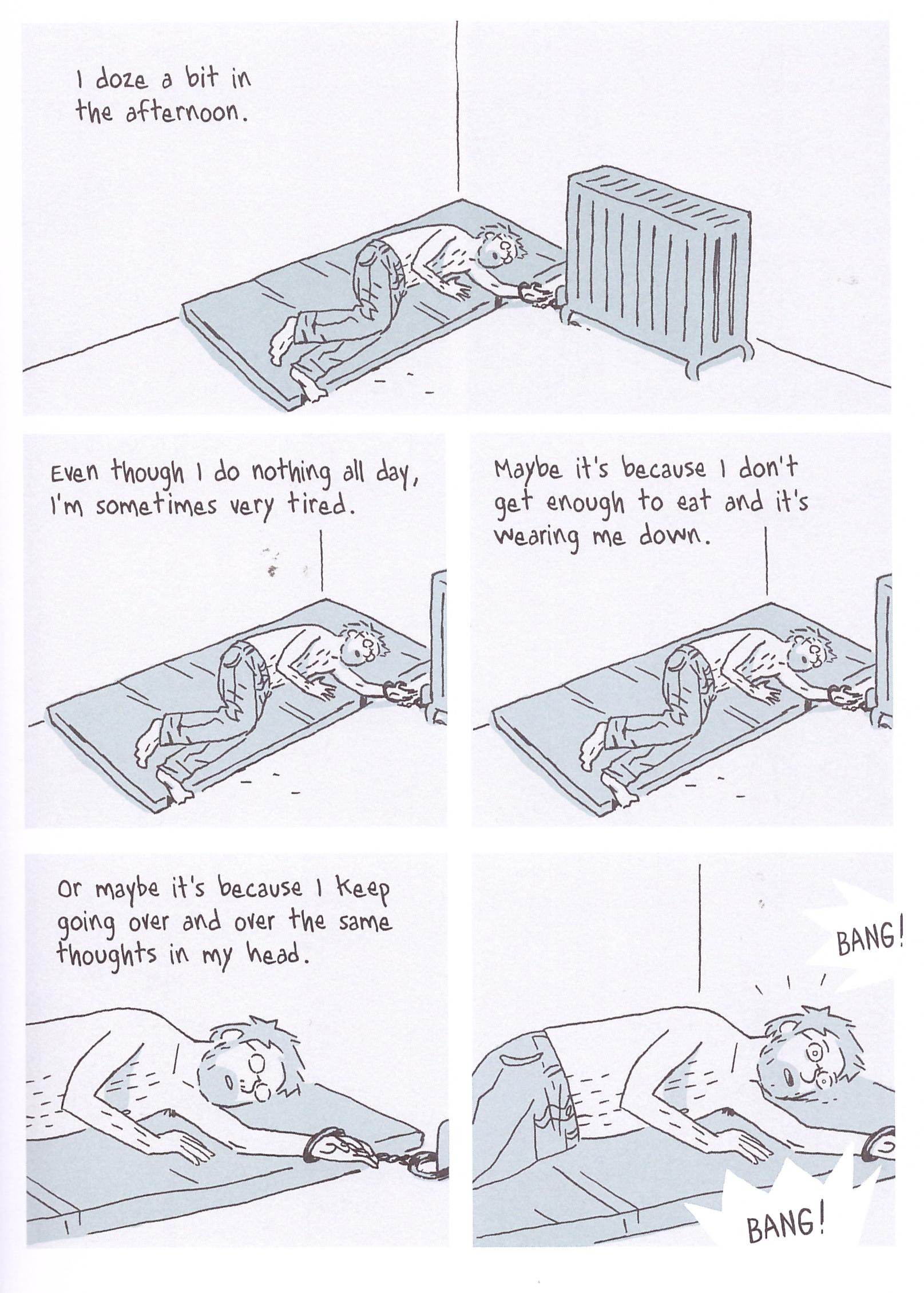 Every NGO employee working in troubled areas undertakes training dealing with the possibility of their being abducted. The chances are relatively small, but the consequences possibly immense, with loss of life the ultimate disaster. Christopher André survived, and Guy Delisle adapts his testimony. It’s a unique, detached book, a relatively quick read about an interminable time, and while generally successful, a story with frustrating gaps provoking questions never answered.

André was taken in July 1997 when employed by a French organisation working in Chechnya, a republic engaged in a guerilla war of independence from Russia. He’s sleeping in the office one night when it’s raided at gunpoint by several men claiming to be police. He’s bundled into a car driven a fair distance and thrown into a barely furnished room. Unable to communicate with his captors by anything other than gesture, he’s fed once a day, taken to the toilet at gunpoint, and otherwise remains locked in the room, handcuffed to a radiator. He’s initially confident that he’ll be rapidly released, but the days extend to weeks, then to months.

Delisle deliberately reinforces the monotony when presenting André’s experiences. There are many, many panels of André as a solitary figure in different poses chained to the radiator, all overlaid in dark grey, reflecting the lack of light in the room. These are delicately drawn in Delisle’s expressive and tidy cartoon style, and Delisle structures the book to emphasise time, chapters each encompassing a single day of captivity. Switching between André’s first person recollections and wordless panels showing him from above is a very effective distancing technique.

A sustained adherence to dull routine establishes a pace and a mood, so the surprise of small changes deliver the equivalent of blockbuster plot bombs, and Hostage is excellent at reinforcing the minutiae indelibly etched into André’s mind. Minor moments of victory are amplified, and the joy of the familiar such as hearing a Khaled song, take on a comforting significance. André enjoys military history, and combats the tedium of solitary confinement by working his way alphabetically through officers involved in the Napoleonic Wars. As his ordeal continues he moves to the more ambitious recollection of individual battles and the strategies involved. It’s a way of knowing a man who remains largely unknown despite being on panel throughout 400 pages. A weakness of personal narrative is it not always providing a complete and satisfying story, and Hostage doesn’t address burning questions that could have been answered by a different approach. André concludes early he’s been abducted for ransom, but remains strangely calm and optimistic, with his greatest related fear being he’ll miss his sister’s forthcoming wedding. A natural and obvious fear would be what might happen should a ransom be refused, but this consideration is never addressed. A postscript notes that after his experience André continued to work in troubled areas for a further eighteen years, in the circumstances an exceptionally brave decision, but another that begs for further elucidation. Why is there such little anger?

Hostage evocatively deals with horrific traumatising event that thankfully few people will experience, doing so in a measured manner that highlights the small moments of hope, but the omissions hang frustratingly overhead.