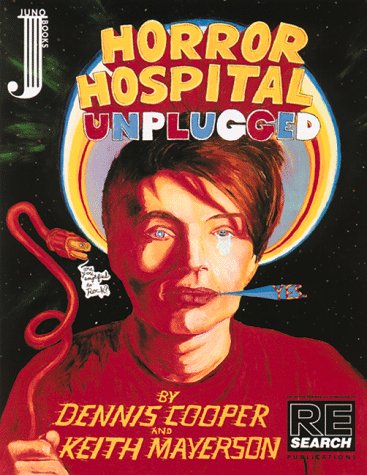 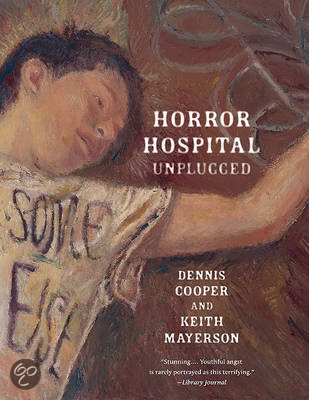 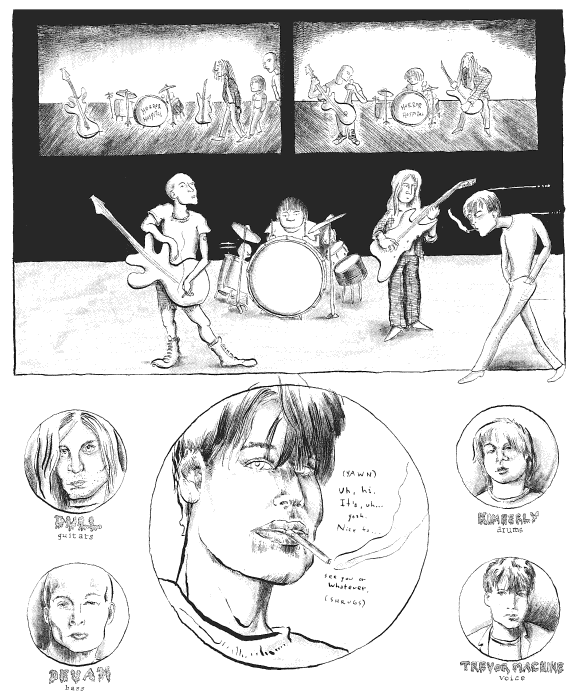 Horror Hospital Unplugged is a curious beast. It’s adapted by novelist Dennis Cooper from one of his early short stories, and sits between comics and illustration, thanks to the versatility of artist Keith Mayerson.

This is the story of Trevor Machine, the young lead singer of the indy band Horror Hospital. Trevor might not be very talented, but he’s very cute, which in itself is enough to draw the attention of manipulative journalists and producers – and also enough to further confuse an already sexually-confused Trevor. For all his rebel attitude, Trevor finds himself torn between his new-found love for an out-and-proud guy and his desire for a career in music, maybe to the cost of his self-esteem. All that doesn’t sound too original, but Cooper’s portrayal of LA music moguls (among them David Geffen) and his inclusion of the real-life late River Phoenix as a ghost full of good intentions gives this fiction an engrossing energy. In common with other Cooper works, the nastiness of the happenings are mixed with a unabashed romanticism, which makes for a potent brew.

Mayerson’s art is a wonder to behold. Besides matching the manic energy of the writing, he manages to use at least a half-dozen styles to convey the characters’ inner lives and their psychological states. From the manga-inspired romantic sequences to the Kirby square faces of a music producer, from cartoony to David Hockney-realism, the pages brim with a vitality bringing a verisimilitude to even the more ludicrous episodes of Trevor’s life. Mayerson also avoids the pitfalls of voyeurism, as the more downbeat moments are drawn in an almost abstract and expressionist style that involves the reader far deeper than a more descriptive style would.

Horror Hospital Unplugged is a book that stands apart, as much for its literary and visual qualities as for its treatment of the age-old story of how young people have to find their way in the world of their cynical and scheming elders.

The first 1996 edition of this book is out-of-print but can still be found online. A reprint was published in 2011 by Harper Perennial.