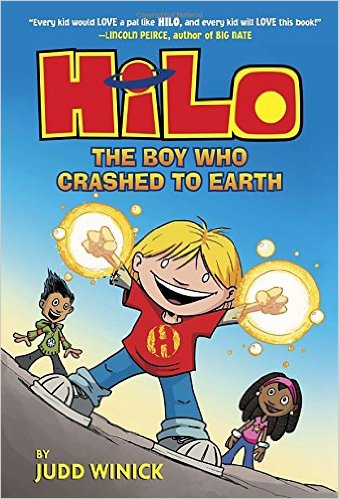 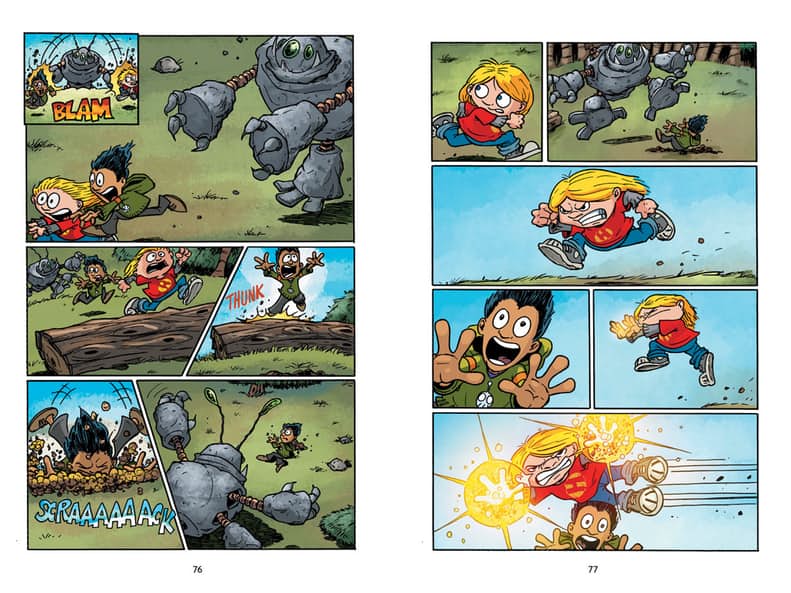 It’s perhaps surprising that with the enormous success of the Calvin & Hobbes newspaper strip that no-one previously considered transferring that type of energy to a comic series. There’s no stuffed tiger, but Judd Winick has taken Calvin’s youthful enthusiasm for life and passion for exploration and passed it on to Hilo, a young alien boy who crashes to Earth in the vicinity of D.J. As he explains, D.J. is the only person in his family lacking an artistic talent, which leaves him feeling insecure and forlorn.

We only learn this, however, after a rocket-paced opening sequence in which Hilo and D.J. are chased by a brilliantly designed goofy rock/insect hybrid monster. That however, is nothing compared to the terrors of school. Here D.J. pulls a stroke of luck as his former best friend Gina returns to class, having moved away a few years previously.

There’s a constant good-natured joy to Hilo that ought to appeal to children and adults alike. Winick really captures the high speed level at which children explore their surroundings, and revel in discovering the new. For Hilo life on Earth is one continuous joyful exploration. He absorbs language by touch, conveniently regurgitates dictionary definitions for any new long word he learns, and is particularly proud of his silver underpants. There is a secret to Hilo, and that’s when another of Winick’s influences becomes apparent.

Because Winick used to write serialised superhero comics where every element requires logical underpinning, there’s a fear that at some point The Boy who Crashed to Earth will suddenly become bogged down with explanations. They’re there, but background stuff for picky minds rather than the be all and end all. Winick also slips in some life lessons, but they’re smoothly incorporated rather than preachy. His cartooning supplies Hilo as a constant rush of motion as befits his personality, with D.J. and Gina not too far behind. There’s a base level of threat, but never a feeling that Hilo won’t solve the problem and save the day.

Fun packed and funny, The Boy who Crashed to Earth is a graphic novel to give to your children and one you’ll enjoy reading to them. Hilo’s back in Saving the Whole Wide World. 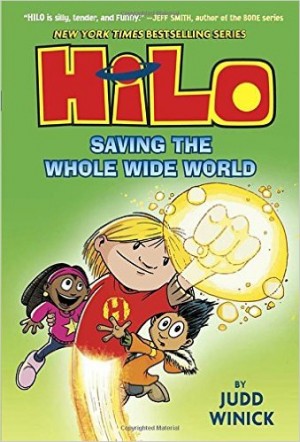