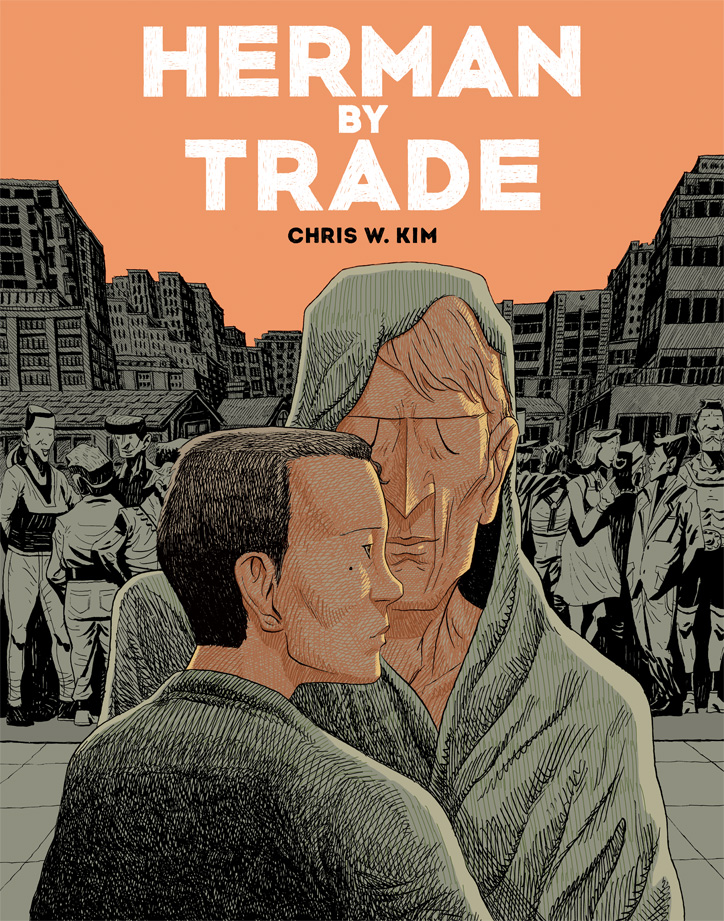 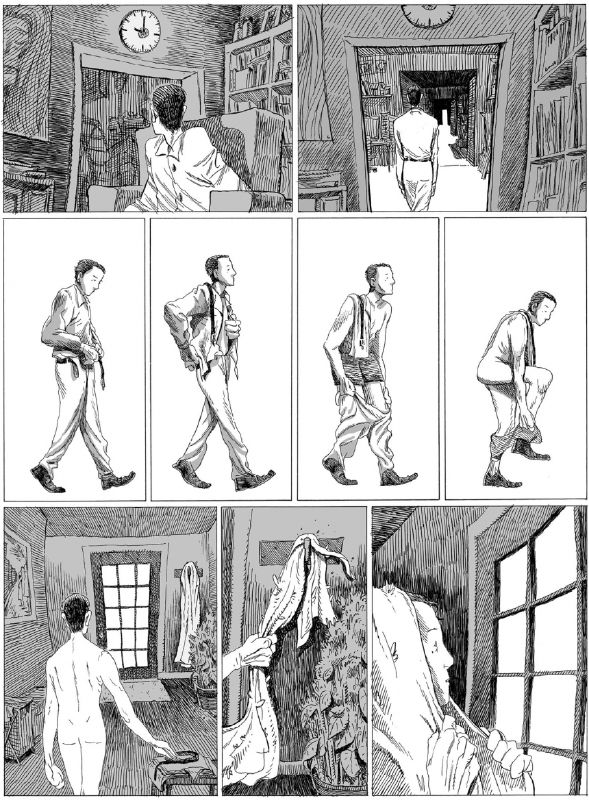 As far as Herman’s street sanitation co-workers are concerned he’s a somewhat dull guy who keeps to himself. That’s not the case. Herman has many solitary interests and one magnificent talent. He can transform his physical appearance, an ability he uses flamboyantly in pursuit of his interests, almost as a private joke. Along with many others he’s a fan of Gare, a film featuring assorted performers that attracts enthusiastic costumed audiences twenty years after release, and Herman is present when the director announces an open casting call for a form of sequel.

Chris W. Kim’s work is contemplative and cinematic, so while the actual story is slight, Herman By Trade is a graphic novel with plenty to offer for those prepared to immerse themselves in a slow-moving narrative and take notice of their surroundings. To some extent this is hindered by Kim’s art, which is sketchy and detailed, but also flat and lacking expression at points, resulting in places where an audience has no awareness of what a character is feeling. The film director Mio is affected by this, but equally well characterised in a fashion that portrays her as aloof and single-minded. A method Kim uses to overcome the lack of emotional engagement is resolutely strange and takes some getting used to as various cast members act as a Greek chorus supplying commentary dialogue. The art excels with Kim’s talent for illustrating dozens of ordinary looking people, each of them distinguishable, which comes to the fore early during a screening of Gare before an appreciative audience. He also packs his backgrounds with detail and we learn much about Herman from his surroundings.

Cinema is littered with examples of directors extemporising around large casts of extras (Federico Fellini and Jacques Tati are mentioned in promotional material), and Kim conveys the business of an active film set well. Here Herman flourishes, his talent recognised and artistically endorsed, but that has consequences.

A dreamlike state pervades the entire story from the narrative comments to Herman’s metamorphosis, but most particularly with regard to Herman himself. As depicted he appears to be in his late twenties at least, so what kind of man is content to hide his light under a bushel for so long when a more satisfying lifestyle was available to him? We never discover. Herman has his shining moment of self-expression as a literal every man, but it also costs him the serenity of his previous existence.

Herman By Trade is not a graphic novel with universal appeal. Little happens overall, and the emotional engagement is minimal, yet there’s also a rich texture and because not everything is spelled out there’s plenty to consider in idle moments after reading.