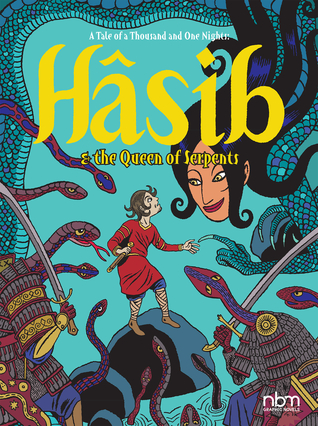 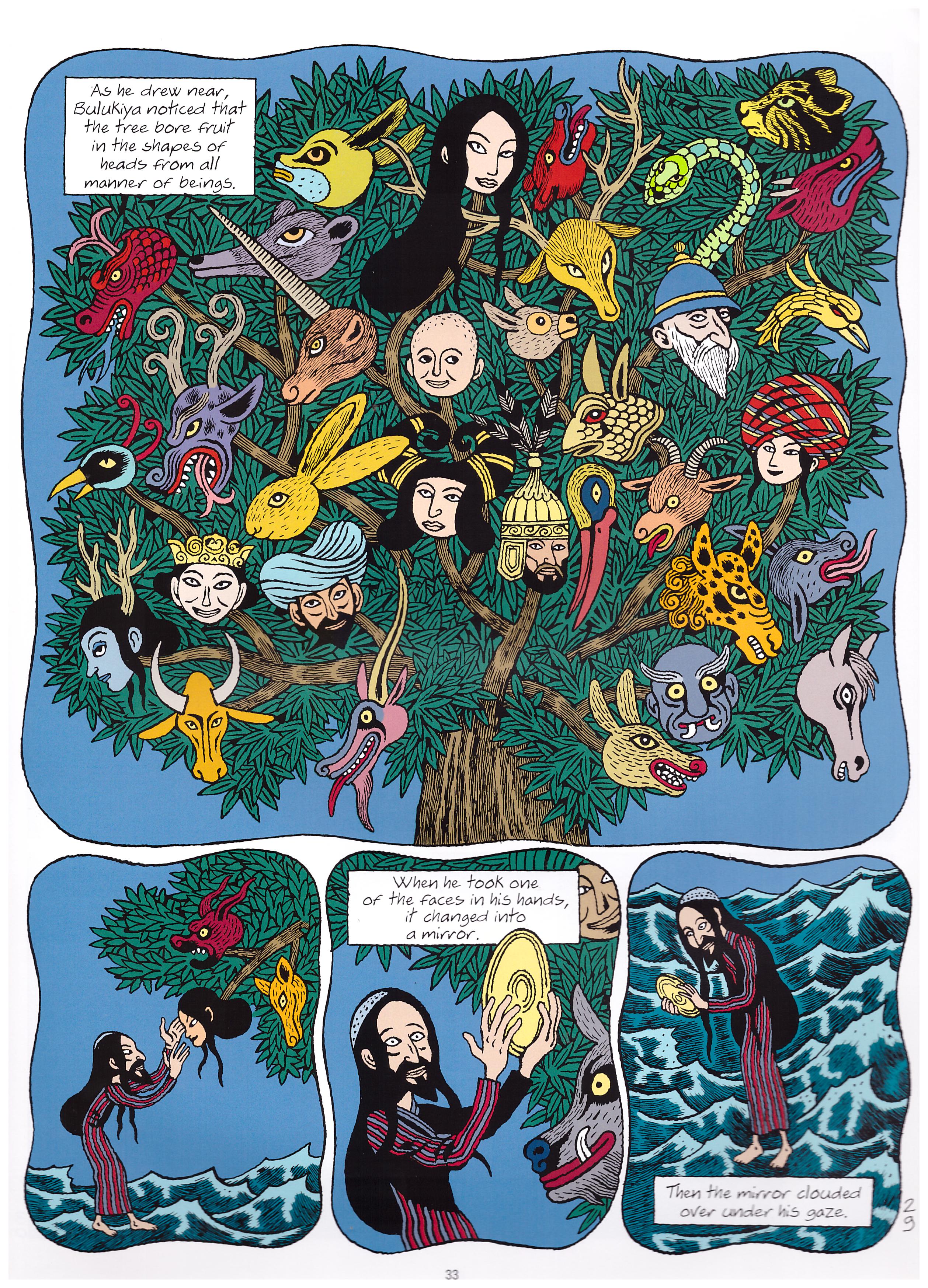 We think of the page turning novel as a relatively modern invention, yet the legend of Scheherazade has it that she saved her life by being such a compulsive storyteller she kept a cruel King entranced for a 1001 nights with the power of words and legends. Her stories were passed down orally for generations before printed books, and existed for well over a millennium in the Arabic world before they were first translated into English. In David B. they’ve found a creator entirely in tune with their mythology and dream-like atmosphere.

For most of his career David B. has worked in black and white with only his book covers displaying a facility for colour, so it’s a real surprise to crack open Hâsib & the Queen of Serpents to discover page after page of stunning colour work. This is traditional flat colour, ideally suited to the mood and symbolism and enhancing the stories no end. David B. has always been absorbed by his dreams, detailing them in other works, and those dreams have often featured great battles and mystical creatures, just like these stories. Another interest has been Arabian culture (see recommendations). It all makes him the ideal interpreter for these stories, and his almost etched images are a thought-provoking combination of mythical themes and ornate decoration. It’s beautiful work, a career highlight among an exceptional bibliography.

It’s possible to look at almost any page and discover something strange and beguiling. Take the sample image. It’s one of dozens that could illustrate the point, the sort of picture a child could stare at for ages absorbing the strangeness. That was a primary purpose, as although not marketed as such by NBM, Hâsib & the Queen of Serpents was created as part of Gallimard’s children’s imprint.

NBM’s lack of categorisation is more appropriate, as irrespective of who the original publishers saw the book aimed at, it’s something anyone can enjoy, such is the care and craft involved. This adaptation drops straight into the middle of the book, picking up with story number 483 of an elderly wise man conceiving his son Hâsib very late in life. Despite being prophesied for greatness, Hâsib is directionless, and falls in with people who betray him easily, and that’s eventually the making of him. The stories twist around, one leading to another, then to another still as other characters become the narrative voice, but they’re always compulsive, and incredibly unpredictable. When dealing with gods, or beings a near as, their interventions are whimsical and often fatal, although not always irrevocable, and Hâsib, Bulukiya and Prince Janshah, whose experiences we also absorb, are subject to the full range of interference. It’s utterly entrancing.

If you look for logic and harmony Hâsib & the Queen of Serpents will disappoint, but anyone just going with the flow should be delighted with this masterpiece.