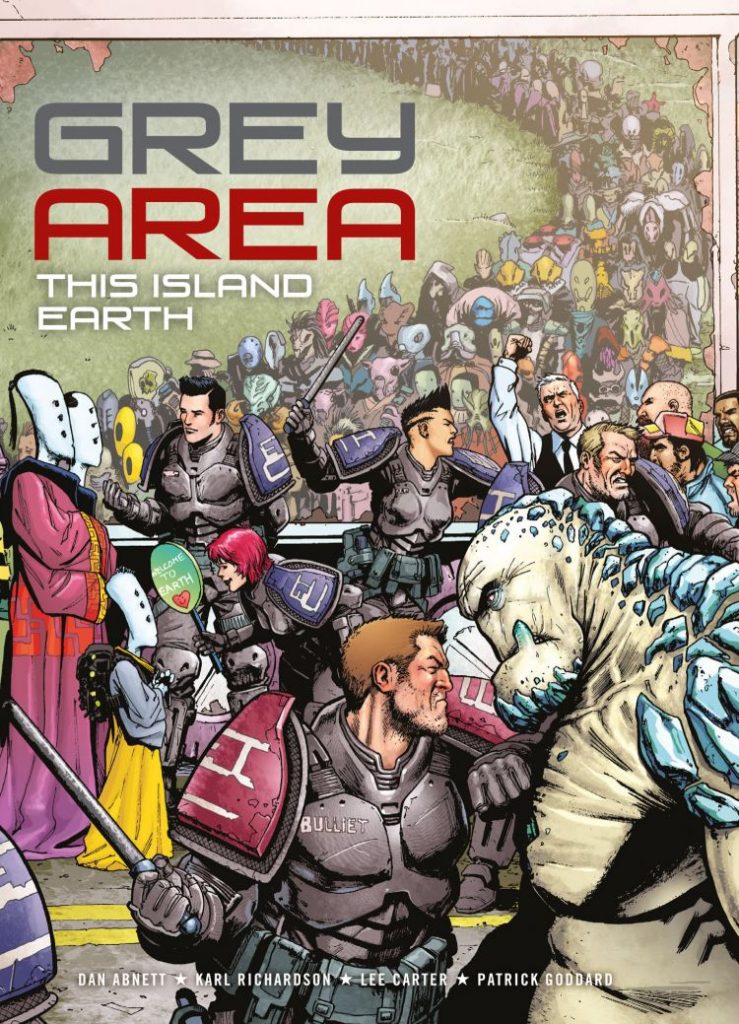 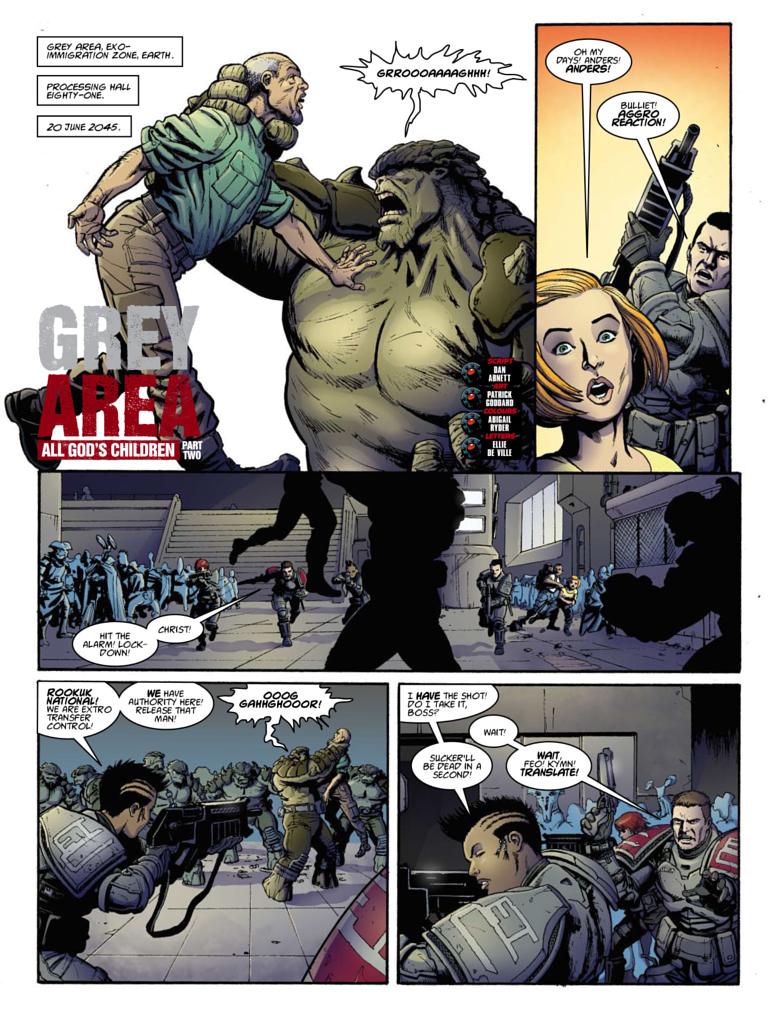 Set in the year 2045, Grey Area follows new recruit Jana Birdy and her fellow Exo Transfer Control Authority (ETC) workers as they attempt to keep human and alien alike safe in the Global Exo Segregation Zone or the ‘Grey Area’. This holding area for all manner of aliens waiting for clearance to visit Earth constantly battles linguistic, cultural, and species difference. For Jana and her co-workers, xenophobic human hate groups that attempt to sabotage human/alien relations, kidnappings, murders, and escape attempts are just another day at the office.

Dan Abnett’s action is nicely counterbalanced with some humourous and political moments, and although it takes place in the future the treatment of immigration and tolerance comments on today’s world. Abnett does not lean completely toward one side of the immigration debate. Instead, he chooses to show the multiple, complex layers involved with the movement of beings with different traditions, languages and agendas from our own; Not everyone is guilty and not everyone innocent.

This graphic novel employs some unique and noteworthy concepts. Characters who are ‘greeted’ are granted the ability to learn any language when in the same room as someone who speaks it. This is via a virus that also infected anyone present during the Earth’s first contact with aliens. The Greeted are not deemed fully human and are the targets of prejudice. Another novelty is the ETC wearing riot helmets with the unique ability to convey messages when oral communication is not possible. Visually, the helmet faces are able to display something like a text message so the team can communicate during an alien music festival.

With an interesting set-up, the only shortcoming is the high sexualisation and low characterisation of Jana, especially in the chapter ‘Personal Space’. Jana is attempting to wash an alien species off in the shower when she calls her boss, Adam Bulliet, for help. She stands naked before him for the majority of the chapter while the steam from the shower (that is no longer running) conveniently hides her lower half. After dealing with the alien, Bulliet hits on her and they hook up afterwards. As she is the main character and female, it would have been nice for her to have more agency and less of a boob side-plot referenced throughout Grey Area.

For the most part, the art shows good action, world building, and even continuity between three different artists. They all employ a realistic style that lends itself well to the genre, and the colours are muted, but appropriate to the ‘Grey Area’ concept. The sound effects pop out of the page effectively throughout. Karl Richardson and Patrick Goddard’s art is the strongest (see sample), offering the most dynamic alien designs and fight scenes. Lee Carter’s art looks rushed and he struggles with facial continuity in the beginning, although improves with good action cuts and intricate panel design and variation.

The female characterisation could have been improved, but otherwise Grey Area is an enjoyable graphic novel with an excellently even-handed take on the increasingly pertinent global issue of immigration. Intriguing concepts nicely compliment the balance between action and humour in the plot, and both art and plot end on a high note with strong action and real world troubles.