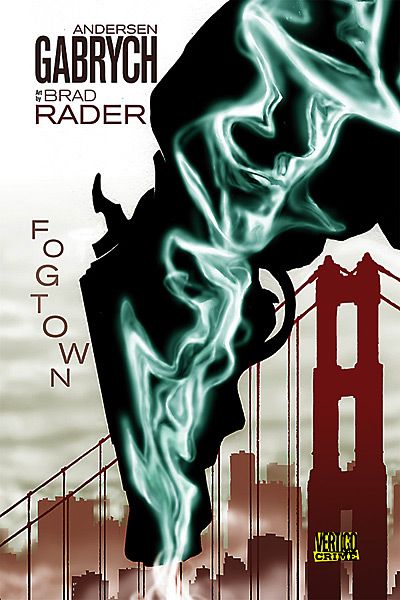 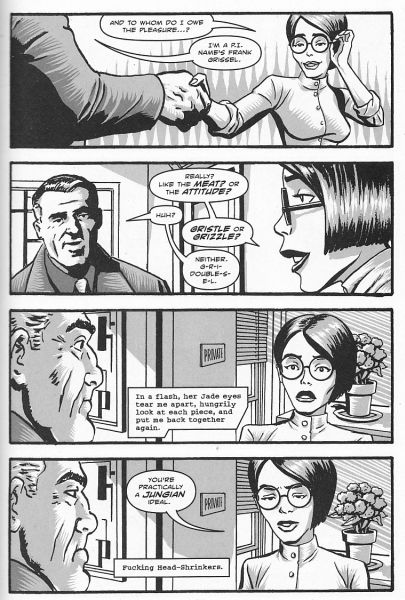 Fogtown was part of a wave of crime fiction at Vertigo, often by creators new to comics. This is the case for Andersen Gabrych, an actor and mainstream writer, but certainly not artist Brad Rader, who’s worked for various mainstream companies as well as on his own gay-themed projects.

San Francisco, 1953. Frank Grissel is a hardened private detective. And not a very nice guy. Brutal, uncaring and disillusioned, he can’t even treat Loretta, his secretary and long-suffering lover, correctly. When a Latina woman asks him to find her disappeared daughter, he simply refuses, and it’s Loretta who persuades him to take the case. A dead teenage hooker’s personal belongings lead him to a female psychiatrist with links to prostitutes, a priest who leads a mission dedicated to helping young prostitutes leave that life, a shady millionaire with a handsome hired muscled help named Bone, and a business shipping goods illegally from China. Those are definitely the ingredients for a classic noir story, but this isn’t a simple variation on well-known themes. Grissel might look like a paragon of the emotionless tough guy, but he’s also deeply conflicted and completely closeted—and that’s not the only queer going-on. The book is peppered with allusions to gay life, but never forgets that it is first and foremost a crime story, with a strong puzzle structure that’s a pleasure for the reader to discover piece by piece.

Rader is more than up to the task of giving flesh to Gabrych’s dense script. He has a variety of styles and influences at his disposal, and this time, Alex Toth isn’t too distant. Rader creates a heavy, dense atmosphere worthy of yesteryear’s black and white films, with his thoughtful layouts showing an impressive graphic storyteller. Given the smaller format of this book (8.3 x 5.8 in., instead of the regular 10 x 6.4 in.) only allowing a low number of panels per page, this is important.

Particularly striking is the way the facial features are rendered, constructed from a few lines in some panels to photo-detailed style in others, creating what could be likened to the use of out-of-focus and in-focus elements of images in film.

Fogtown could be seen as a deliberate queering of the crime/noir fiction genre, which might be a first in comics. This is never clearer (and rather amusing, considering the stakes) than in scenes where the detective confronts the hired muscled help, leading of course to testosterone-filled fights. All those big boys in crime fiction going at each other, why do they do it? Surely not only to show who’s top dog. Though sublimated attraction might sound like a joke, a bad Freudian textbook interpretation, it becomes deadly serious in the hands of Gabrych and Rader. And so, we have repeated meetings between Grissel and Bone, with simmering homoeroticism being seemingly brought to the fore.

Another aspect subverting tradition is that Fogtown is the kind of crime fiction where money and perversions go hand in hand. In traditional crime fiction, homosexuality would be one of these perversions. Not so here. It is one thread of a complex and very human tapestry woven by two talented artists who’ve put the queer in noir.