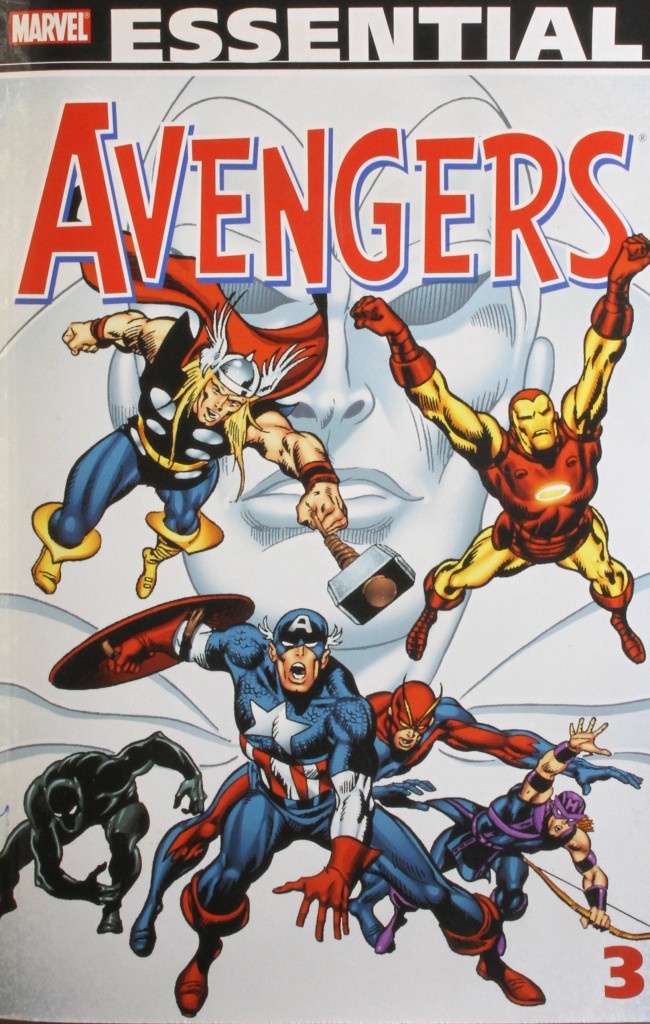 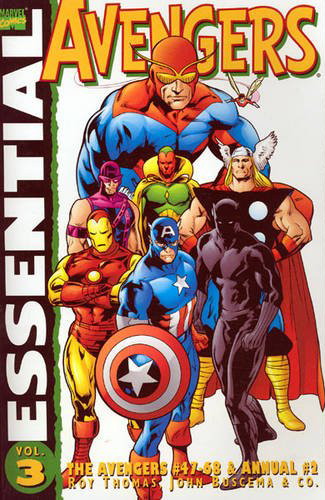 At the time this bulky black and white collection opens, Roy Thomas had been writing the Avengers for a year, and this incorporates his offerings from 1967 to 1969. It stops just short of Thomas’ golden era.

It’s fair to say Thomas struggled with the Avengers initially, handicapped by editorial decree forbidding him use of characters who carried their own titles. It’s testament to his plotting ingenuity that he found methods of including Captain America, Iron Man and Thor frequently. They might be required to authorise a new member, or to cope with a menace beyond the capabilities of the regular team, which lacked raw power. His most creative finagling was via a spirited annual in which the present day team drop back in time a few years to encounter their founding counterparts. Over the course of these 22 issues Thomas completely re-formats the Avengers. Not a single person from the opening issue’s cast remains as they were.

The book shows Thomas becoming more ambitious with his plots in a period of creative inspiration, and placing greater emphasis on characterisation, but time and again it doesn’t result in compulsive reading. Sometimes it gels, such as with a new Masters of Evil (of all things), and the Avengers meeting their founding counterparts, resulting in a spirited and still enjoyable read, but more often than not those interesting ideas are sucked into a puddle of mundanity. It applies to Hawkeye changing identity, a crossover with the X-Men, the introduction of the Black Panther, and a poor 50th issue with the Avengers visiting Olympus.

The two most prominent characters that Thomas created for the series are the Vision and Ultron, the former rapidly inducted into the team, the latter seen several times, each occasion upgraded from previously, another good idea. The Vision’s introduction is the most famous inclusion, and while the first of two parts is a solid mystery with a clever ending, time hasn’t been kind to the sequel which is overwritten by today’s tastes. We also have to cope with other contemporary narrative elements, including numerous thought balloons, and hip 1960s dialogue. Thomas is certainly inventive, but also too glib and overly-dramatic: “I’m taking her bye-bye for a while! And in case you think it’s so you’ll think twice about me becoming an Avenger, why, who am I to argue with you?” And that’s in an otherwise decent, if wacky pair of issues in which the Wasp and Hank Pym marry. Still, this was the era of the Batman TV show.

This collection also catalogues the progression of John Buscema as a superhero artist, from his earlier cramped action style, not always sympathetically inked, to the producer of glorious open pages and a dozen pictures that enshrine themselves in your memory, his splash pages standing out. The featured image is one of a pair, the other equally impressive with Asgardian frost giant Ymir menacing different Avengers. Those who only remember Gene Colan’s later compromised contributions to the Avengers might be amazed at a début where he mimics the power of Buscema’s layouts, but the subsequent work, while in his glorious style, lacks dynamism for the Avengers. The book closes with some of Barry Windsor-Smith’s earliest Marvel pages. The talent is there, but these are awkward Kirby-inspired pages, before he found his own style. We close with Sal Buscema imitating Smith imitating Kirby, which also isn’t great.

Never mind. Essential Avengers 4 lives up to the title, with Thomas’ best work and some stunning art. Those who prefer their Avengers reprints in colour and more handsomely packaged can find the same content spread across volumes 5–7 of Marvel Masterworks: The Avengers.