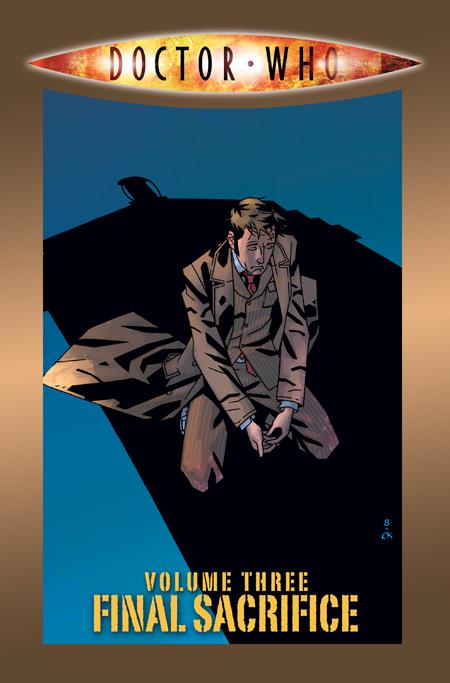 Over two volumes Tony Lee’s told several stories, but the threat of the Advocate has always been running in the background. Final Sacrifice is the culmination of her plans, with the period of deceit and manipulation over. She apparently now has what she wants, and no longer needs to conceal what she is. What’s good about Lee’s plot is how assorted elements that appeared to have seen their use in the previous stories actually have an extra role to play.

Lee’s plot rolls along very well. It has plenty of twists, a nice emphasis on the human element, and the thrills you’d want, but don’t investigate the structure too much, as that reveals it also depends on quite some convenience in places. Treat someone badly, and they’ll turn against you is pretty obvious, and Lee needs a shapeshifter for a specific purpose, and has one to hand, except that purpose requires reversing his previous standpoint. Later revelations indicate it was intended at the character’s introduction in Fugitive, but it’s sloppy. However untidy these may be, they are perhaps minor considerations in the bigger scheme of enjoyment to be had. Part of the plot concerning two opposing sides fighting a war that will destroy them both, with assorted people arriving on the planet and finding themselves in the opposing camps might remind some of a Tom Baker era Doctor Who TV show.

Matthew Dow Smith’s art works better than his previous stint during Fugitive, being less crowded and with the viewpoints varied a little more. He also has a try at writing one of the shorter back-ups, and ‘The Big Blue Box’ is very good, the story of a man who’s been seeing the Tardis throughout his life, and why that’s the case. Touching, imaginative and humane, perhaps Smith should write more often, as his is the best of the shorts.

Jonathan L. Davis’s story is somewhat unlikely and lacks a proper explanation, while Kelly Yates draws the Doctor well enough, but over-exaggerates other characters, and has never quite captured Donna Noble. Al Davison’s story of the Doctor’s dream looks spectacular, with great layouts and vibrant colour, but as with most strips about dreams, the surrealism wears thin.

Lee and Smith close the book, which is only right and fitting. ‘Old Friend’ is a touching tale of Barnaby, the Doctor’s companion, and sneakily ties into the main feature. It’s nicely done.

Anyone’s who’s followed Lee’s work from the start is surely not going to feel let down by his finale, so that makes Final Sacrifice worth buying, and that there’s also value to be had from most of the back-up features is even better. The entire content can also be found in volume three of Titan’s Tenth Doctor Archives, along with the previous Tesseract.