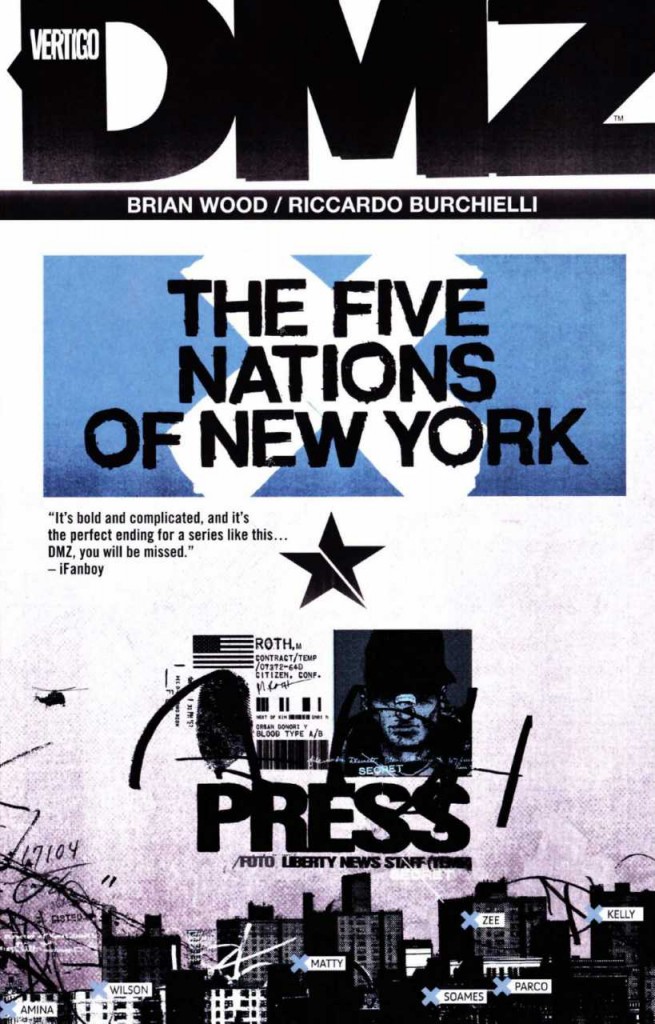 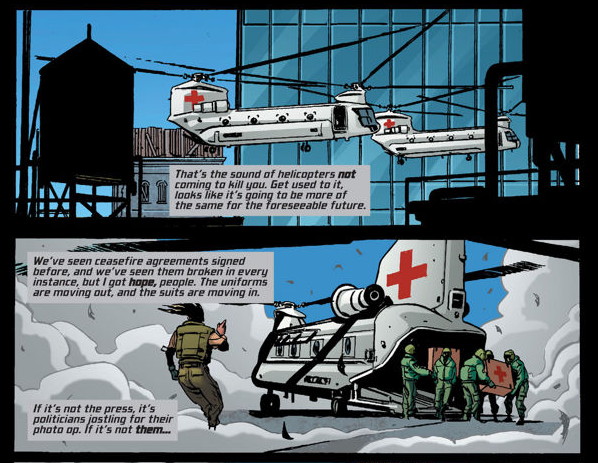 So we arrive at the DMZ series finale, and what a despondent and downbeat affair it is, although that’s fully in keeping. The peace deal brokered in Free States Rising left a lot to be desired when accommodating the truth, but the bigger picture prevailed, and that occurs again here. Writer Brian Wood poses a lot of questions, and many answers are unpalatable. For all the dirty work carried out by Trustwell, for instance, and exposed by Matty Roth, it only took a re-branding to restore public trust and to be awarded the rebuilding contract for Manhattan. Just like in the real world. Manhattan is to be split into five nation boroughs, and a weapons amnesty, $1000 and a housing lottery is intended to wipe away the previous six years. But there has to be closure, and closure requires a scapegoat.

The shiny coating of optimism pasted over a society can hardly begin to address the issues or the truth, despite what the US government would like to pretend, and that’s what Roth discovers as he tours the new boroughs. For some while he’s had a book planned, and he’ll now have the time to complete it.

The ending delivered here probably isn’t what most people would have wanted, but it’s consistent with what Matty Roth became and the ghosts he carried around with him. Those ghosts will never be adequately laid to rest, and he spends a fair amount of time contemplating them. Too much time actually, because this final arc drags. The opening and penultimate chapters supply the commentary on political expediency and what remains offers little. Were it not for the deliberately dangling plot elements, the previous volume would have formed a better conclusion, as this is very much epilogue territory.

There is an actual epilogue, which runs quotes from Roth’s book in parallel with a young woman touring Manhattan fifteen years after the events of the previous chapter. It has charming moments, but serves more to underline than to offer anything new.

This entire book is drawn by Riccardo Buchielli, and all the better for it. He’s an amazingly adaptable artist who defined DMZ both the title and the landscape. His gritty urban squalor becomes so ingrained that arriving at his depiction of the shiny new Manhattan in the final chapter seems somehow out of kilter.

DMZ as a whole is a patchy body of work. There are too many very average single chapter interludes, but the statements and imagery of the more successful story arcs linger long after the books are closed. This is because DMZ has something to say, and it remains relevant today.

Those wanting their DMZ in hardback can also find this as DMZ Deluxe Edition book five along with Collective Punishment and Free States Rising.