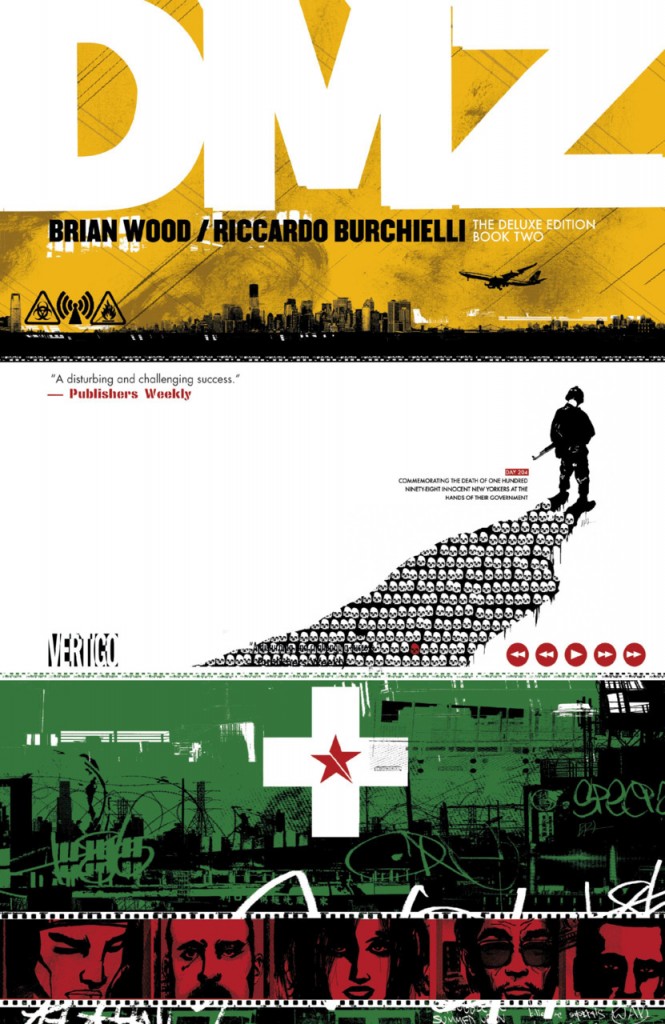 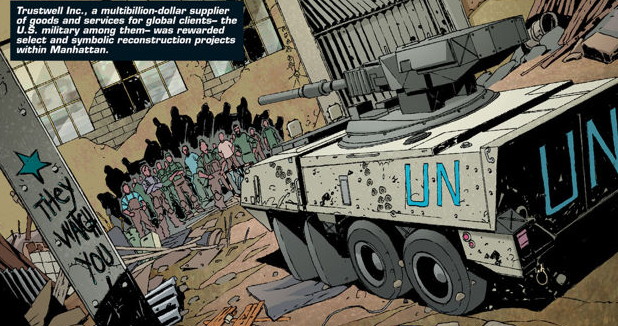 This second hardcover collection of Brian Wood and Riccardo Burchielli’s work is a mixed bag; certainly of higher quality than the previous volume, yet not entirely successful. It gathers the previous paperback collections Public Works, Friendly Fire, and The Hidden War.

Wood has now decided where his series is going, and with these stories it becomes an ongoing commentary on the war on terror, albeit with the opposing forces both American. It’s the two longer stories that are the most successful, both dragging on the ground journalist Matty Roth through the wringer, both spotlighting how assorted vested interests attempt to manipulate him and both leave him compromised.

‘Public Works’ and ‘Friendly Fire’ both take contemporary newspaper reports as their starting point, the first spotlighting a company tasked with reconstruction work, yet mired in accusations of favouritism and corruption, and the second isolating an atrocity with American soldiers held responsible, although only a couple of years after the event. Trustwell, with its own private security force threatening locals manipulates conflict for profit, while when a reckoning is held over the events of Day 204 it seems it’s only the innocent who’ll pay. Wood poses many possibly unanswerable questions along the way, delivers a decent study of ordinary humans under pressure, and supplies different forms of shocking conclusion. Guest artists Nathan Fox and Viktor Kalvachev effectively illustrate scenes from the past and Burchielli handles the remainder with aplomb.

It’s with the following selection of one-shot stories that the less satisfactory elements emerge. The spotlight on Wilson is the most engaging, but then he’s a complex character, a man who believes he can see his place when the war ends, and believes he controls it in the meantime. Danijel Zezelj’s gloomy art helps deliver the shades. Also good is Decade Later, a street artist with no concern for conflict or taking sides, and one of the few DMZ characters to score a victory. The remainder aren’t bad, although the Kelly chapter certainly isn’t good, but don’t match the quality level of the stories extending over several chapters.

As with the first volume, this collection has an illuminating conversation with Wood and a plethora of sketches from the artists.